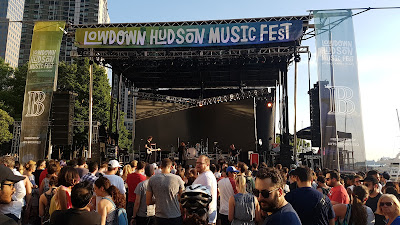 Click on images to view full sized.
...
LOWDOWN HUDSON MUSIC FEST 2017
If it is July and the location is Brookfield Place, it must be time for the Lowdown Hudson Music Fest.

Somewhere between 5:00 and 5:30pm, on a hot Tuesday afternoon, I stepped outside of the air-conditioned comfort of Brookfield Place to see what the weather was up to and immediately regretted my decision. In a word, the weather was Brutal. I returned in a rush to the soothing comfort of the Winter Garden, and did not leave it until around seven when the outside temperature had dropped to a more bearable level, aided by a breeze rolling in off the Hudson River to help it along.

By this time someone calling herself Lion Babe - yes, indeedy - was turning up the heat on stage with what I can only assume was the latest style in black rhythm and soul, or whatever it was she was modulating her way through. Lion Babe appears to be the latest in a long and illustrious line of gymnastic warblers who may or may not have something important to say, but I find forgettable once the song is over. In deed, minutes after she left the stage I could not recall one catchy melody or hook that might have made me want to hear more. 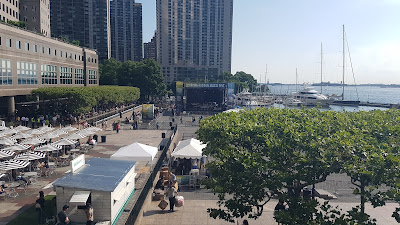 ...
However, the audience was lapping it up, and they were soon right into the hip hop beats of the main act, the man calling himself Common. I guess with a name like that there is nothing else you can do but work hard to show you are anything but common. Even my limited knowledge of this genre recalls that Common (born Lonnie Rashid Lynn, Jr in 1972), has been around since the early 1990s, and is one of the early practitioners of hip-hop music in New York City.

I'm sorry, but maybe I'm turning into the grumpy old man I swore I'd never be. Having come of age in the 1960s, I guess I was spoilt by so many great songwriters and singers who not only had something to say, but who also knew how to say it with a great melody line, a catchy hook, and lyrics that didn't make you blush in front of your mother (let alone your grandmother!) Maybe too, I needed to have been born in a ghetto in 1970s New York to really understand and appreciate hip hop music, and rap.

Both Lion Babe and Common, and their crews of very talented musicians drank gallons of water and poured it all out again in copious amounts of sweat, while they commanded the stage as only hard working musicians know how to do. I am not doubting their talent in the least. It's just that the genres these performers have chosen to work in consistently fails to move me. I am well aware that the fault lying at the heart of my lack of appreciation is entirely my own, and not that of the performers on stage on Tuesday night. 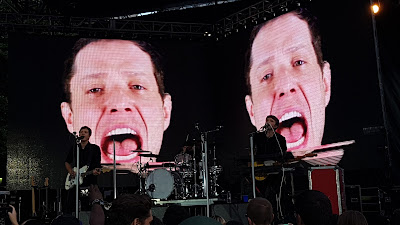 ...
OK GO
I first became aware of OK GO, like millions of other fans, via the band's first viral video for the song, Here It Goes Again, which quickly became known as 'the treadmill song'. If you've never seen it, head over to YouTube right now and take a look. You'll be happy you did. The group has gone on to make even more complicated one-take music videos that seemingly defy the imagination, and each video is more complex in terms of its planning and choreography than the previous one.

Needless to say, I was not going to pass up an opportunity to see the group performing in New York during my stay, especially since the show was free. As soon as the show started I realized that despite viewing their videos dozens of times on YouTube, I was totally unfamiliar with their music. 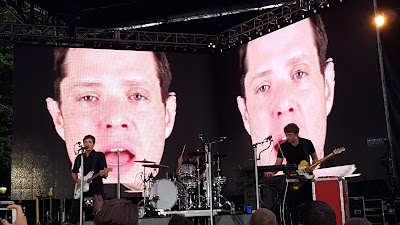 After giving the matter some thought I know why. In watching the videos, I have been so engrossed in the complex visuals that I have not been focusing on the actual songs themselves. For me, the music was just the accompaniment to the visuals, and to the complicated choreography. Stripped of the visual element, I initially feared the songs might turn out to be dull and uninteresting, but I was delighted to find the songs stand up perfectly well on their own.

Of course, several of the songs were well known to me, but others, shorn of their visual elements, were truly being heard for the first time. With OK GO I was in my musical element. I was on familiar ground. Here is a genre of music I understand. Here is a group that also knows how to write great hooks with strong melodies that audience members can pick up quickly, and are able to join in on with little teaching or encouragement.

Like Lion Baby, Common, and Flint Eastwood (the opening act for the night), the four members of OK GO were pouring sweat on stage almost as fast as they could down the cold water they were consuming in an effort to remain hydrated. Like the professional musicians who preceded them, they gave their all, and the 90-minute performance has been one of the musical highlights of my trip to date. 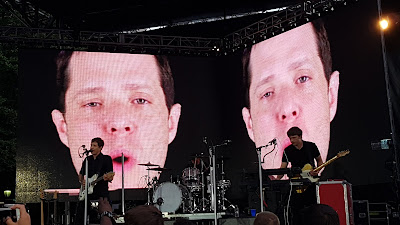 Any questions, comments or suggestions? How about complaints or compliments? Let me know via the comments box below.
Posted by Jim Lesses at 2:58 AM