NYC Day 37: In Which I Rest and Immerse Myself in the Wide Sargasso Sea 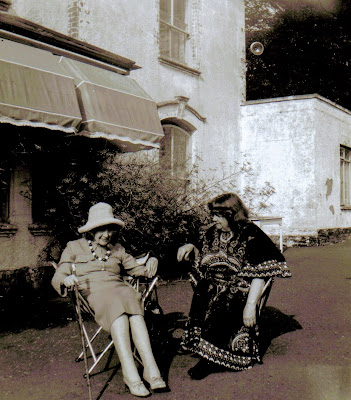 The elderly Jean Rhys (at left) at her home in Cheriton Fitzpaine, Devon
...
With the temperature across New York City heading for the 90 degree mark, the humidity levels not far behind, and city authorities issuing heat warnings and opening local cooling centers, I decided the smart thing to do would be to stay in. Even the promise of chilly air-conditioning at Brookfield Place could not entice me to descend into what would have been a stifling subway system for the 40 minute ride downtown.

There was nothing for it but to crank up the portable air-con unit in the apartment, and engage in some writing, reading, and account balancing. And since I have been making good use of my commuting time over the past few weeks reading several of the books I have purchased thus far, I thought I might add some comments about one of those titles in today's post. 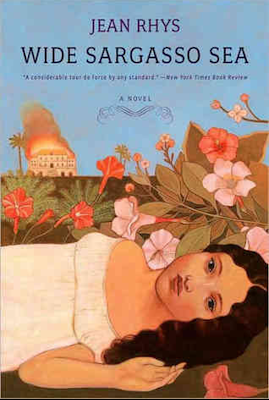 ...
WIDE SARGASSO SEA*
Wide Sargasso Sea, by Jean Rhys tells the story of the 'mad woman in the attic' who is apparently an unseen figure in Charlotte Bronte's, Jane Eyre (a book I have not read), and what a sad and melancholy -- but beautifully written tale it is.

The dust jacket notes: Set in the Caribbean, it's heroine is Antoinette Cosway, a sensual and protected young woman who is sold into marriage to the prideful Rochester. Rhys portrays a society so driven by hatred, so skewed in its sexual relations, that it can literally drive a woman out of her mind.


[Jean] Rhys was born in Roseau, the capital of Dominica, an island in the British West Indies. Her father, William Rees Williams, was a Welsh doctor and her mother, Minna Williams, nee Lockhart, was a third-generation Dominican Creole of Scots ancestry. ("Creole" was broadly used in those times to refer to any person born on the island, whether they were of European or African descent or both.) [Source: Wikipedia]

In the introduction, written by Francis Wyndham we learn:


For many years, Jean Rhys has been haunted by the figure of the first Mrs. Rochester  - the mad wife in Jane Eyre. The present novel ... is her story. Not, of course, literally so: it is in no sense a pastiche of Charlotte Bronte and exists in its own right, quite independent of Jane Eyre. But the Bronte book provided the initial inspiration for an imaginative feat almost uncanny in its vivid intensity. From her personal knowledge of the West Indies, and her reading of their history, Miss Rhys knew about the mad Creole heiresses in the early nineteenth century, whose dowries were only an additional burden to them: products of an inbred, decadent, expatriate society, resented by the recently freed slaves whose superstitions they shared, they languished uneasily in the oppressive beauty of their tropical surroundings, ripe for exploitation. It is one of these that [Jean Rhys] has chosen for her...heroine.

Among other things, the book is quite open about the resentment and racism that 'the recently freed slaves' (mentioned by Francis Wyndham in her introduction), express towards the expat British. Terms like 'white cockroach,', 'white nigger' and other epithets are hurled by the local children at their white counterparts, and the understandable resentment that many former slaves feel towards their former owners and overseers, bubble along beneath the surface of all their post-colonial relationships.

From time to time these resentments boil over, leading to one of the key incidents early in the book when the family home is attacked by a mob of angry villagers. This incident results in the death of a minor, but important character in terms of the arc of the book, and without giving more of the story away, let me just say it's all downhill from there. However, the writing is so evocative of time and place, so infused with detailed descriptions of landscape and the natural beauty of the island settings, that it was impossible to turn away and not look at the horror that was slowly smothering Antoinette and the increasingly poisonous relationship with her new husband, Rochester.

It is a relationship that begins to sour soon after their wedding, even as they settle in to their honeymoon in a remote location along with several servants and other staff. Antoinette's newly minted British-born husband has no understanding of the norms, mores, and culture of the islanders he has landed amongst, and even less interest in learning about or understanding them, thus setting the scene for conflict and misunderstanding that spirals increasingly out of control.

I was reading the book on the subway a couple of days ago, and as I closed the book and began putting it away in my bag, I heard a female voice say, "Sir, I love that book!"

When I looked up at the young woman who had spoken, I agreed that the book was a great read, and replied to the effect that although I had not yet finished it, this was a book that I would want to read again. She agreed and said that she had read it three times herself, and that it was one of her favorite books. I added that this was a book that had been on my 'radar' for many years, and that I was only now getting to read it, and that I was very happy that I had finally gotten around to doing so.

It was a brief conversation if only because I was about to get out at the next subway station, but I could see that other commuters were showing interest in what we were saying. Unfortunately, it didn't occur to me to hold the book up so they could see what we were talking about. If something like this were to happen again with another book (unlikely), I will make sure I do just that.

This book is definitely a 'keeper'. The writing borders on the poetic much of the time, and despite the overall mood of dread I had as I progressed through the story, I knew this would be a book I will keep and read again at some future date. I even thought I might read Jane Eyre, but Rhys's book may have spoiled any pleasure I may derive from doing that. If you have read Jane Eyre and wondered about the mysterious woman in the attic, this is definitely the book for you. I recommend it highly.

*Wide Sargasso Sea becomes book number 28 in my self-imposed 52-Book-Year Challenge, in which I aim to read an average of one book per week throughout the year. 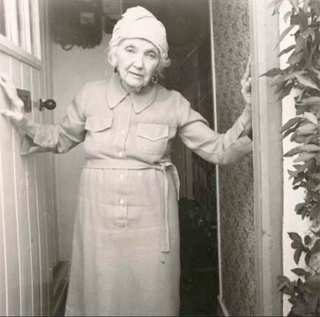 Jean Rhys at her cottage in Devon.