NYC Days 44 & 45: In Which I Luxuriate in The Lincoln Center Out Of Doors 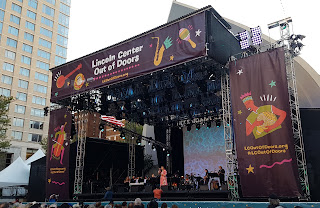 The main Lincoln Center Out Of Doors stage
...
Any questions?

No? Then let's get started.

If it's summer (and it is), it must be time for the annual Lincoln Center Out Of Doors festival, that wonderful three week program of free dance, film, spoken word, and music - lots of music. Last summer I attended numerous performances during the festival, and I was absolutely blown away by the quality of the gigs and the performers who featured in them. So it was with much anticipation that I looked at the program for this year's event.

The festival began last Wednesday with a concert hosted by NPR (National Public Radio) Music. Called Turning The Tables Live, the evening was "...a celebration of the pioneering women of the "classic album era" (approx. 1964-present). Some of today's brightest performers open the evening with a set of covers handpicked from NPR's newly unveiled 150 Greatest albums by Women list."

As it happened, the evening opened with Ricky Lee Jones performing in full her classic album, Pirates. Jones was followed by a great lineup of female talent which included Lizzo, Gaby Moreno, Alynda Segarra, TORRES, Nona Hendryx, and the great Ronnie Spector. To make an amazing night of music even better, the audience was treated to a surprise appearance by Roberta Flack, one of America's greatest contemporary singers.

The inimitable Dionne Warwick commands the stage.
...
Due to other commitments (see previous posts), I missed the Thursday and Friday night events, but was back on Saturday night for An Evening With Rumer. The British born Rumer, as she is known professionally, has a repertoire of songs in the same vein as Dusty Springfield and Karen Carpenter, and apart from performing her own material, Rumer is a fine interpreter of the songs of Burt Bacharach and Hal David.

The highlight of the night for me, and for the assembled mass of people waiting to see and hear her, was the special guest set of songs by another of America's great performers -- and surely the best interpreter of Bacharach and Hall David -- Dionne Warwick. At 76, it has to be said that Dionne Warwick's voice does not command the full power it once had, but that made no difference to the many hundreds of fans hanging on her every note, happy just to be in her glorious presence. 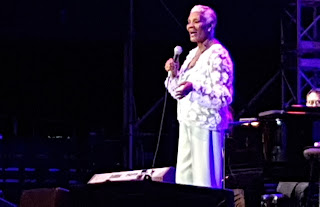 Dionne Warwick on stage.
...
Which brings me to today, Sunday. This year Lincoln Center Out Of Doors was hosting the Double Dutch Summer Classic National Competition. On a hot, but thankfully almost humidity free day, dozens of children and adolescents ranging in age from 10 to 17 or 18 years, hammered the boards at the Josie Robertson Plaza with so much energy, enthusiasm and athleticism that I am positive it left them all completely drained and exhausted by the end of the afternoon.

Forget the endless 'Boot Camp' variations. If you want to push your body through a full aerobic series of exercises, I would argue that Double Dutch beats boot camp hands down. The one-minute routines the competitors put their bodies through provided the best example of High Intensity Training I have yet seen.

A typical routine included jump rope, squats, high kicks, back flips, push-ups, leg splits, and so many other complex maneuvers that I can only apologize for my lack of knowledge and vocabulary that fails to give the young competitors the full credit they deserve.

Video footage from one of the teams competing at the Double Dutch championship.
...
Week Two of Lincoln Center Out Of Doors continues next Wednesday, August 2, 2017, with performances by Ibibio Sound Machine (in their U.S.debut) and Angelique Kidjo. Ibibio Sound Machine are described in the program as "an eight-piece band led by English-Nigerian singer Eno Williams." The band plays a "...mix of Afrobeat, club music, and funk." Angelique Kidjo, a Grammy Award-winning singer-songwriter, who was born in the African nation, Benin, reimagines Talking Heads' groundbreaking album Remain In Light. As a huge fan of Talking Heads and of that album in particular, I will definitely be there Wednesday night. Maybe I'll see you there!