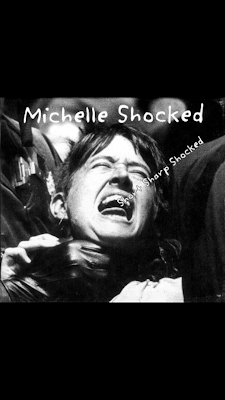 The indie folk-singer took the music scene by storm in 1988 with her debut album, Short Sharp Shocked, which went on to receive a Grammy nomination and win Folk Album of the Year. Her powerful and versatile music incorporates various styles from blues to rock to traditional fiddle tunes. Tonight she kicked of her residency with a performance of Short Sharp Shocked.
Short Sharp Shocked was the second album by Michelle Shocked, and was originally released in 1988. The photograph of Shocked that appears on the cover was taken by Chris Hardy of the San Francisco Examiner at a protest in San Francisco during the 1984 Democratic National Convention.
Michelle and her three fellow musicians put on a great performance, and I came away from the gig more than happy with my decision to book a place at all three shows of her City Winery residency as they are billing it (despite the fact that the gigs are each about a month apart). The seat I had chosen, while close to the stage, was not exactly located in the best position since I had to twist my body to the right to see the performers. Thankfully I was able to reposition my chair for a more comfortable look.
Since Michelle was there to perform her now classic album, Short Sharp Shocked in full, that constituted the set list. However, towards the end of the night, to the audiences surprise, she brought her father onto the stage, and recounted a story about how he had taught himself to play mandolin when she was still a child. To our delight, with mandolins in hand they both played Woody's Rag, an instrumental attributed to Woody Guthrie.
You might assume that the night was 'over before it had begun' if only because the original album had maybe 35 minutes or so of music on it. No so. By adding several longish stories and song introductions, as well as extended instrumental breaks which allowed the musicians to shine, the show went for almost 90 minutes, and this does not include the 20 minute opening set provided by guitarist and Short Sharp Shocked record producer, Pete Anderson and his fellow musicians, who then backed Michelle throughout her set.