Amateur Night at the Apollo Theatre 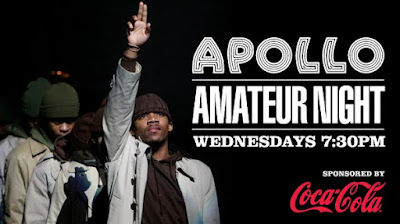 ’s Apollo Theater has been running Amateur Night events for over 75 years. In fact, Wednesday nights at the Apollo have become a institution, and have seen some of contemporary music’s greatest performers compete and win the event.

The Amateur Night at the Apollo winners circle reads like a Who’s Who of the best African-American talent you could hope for. It includes Billie Holiday, Sarah Vaughan, Ben E. King, Jackie Wilson, Gladys Knight & the Pips, The Ink Spots and many others. Ella Fitzgerald, one of the first Amateur Night winners was just 15 when she stepped onto the Apollo Theater stage.

As I entered the great gilded theater, a pre-show “jam fest” with DJ Jess was in full swing. Apollo audiences come ready to party, and as the audience slowly filled the theater, no-one worked harder than DJ Jess to get the party started! The comedian Capone is Master of Ceremonies and host of the evening. He explained the ‘rules’ of the evening and spelt out what was expected of the audience, while keeping the mood light, upbeat, and things running smoothly.

The excellent house band was headed by the evening’s musical director, Ray Chew along with three fellow musicians, called his Crew – hence their stage name, Ray Chew and his Crew. While some of the contestants performed to prerecorded backing tracks, Ray and his Crew were kept busy throughout the night playing live for most of the acts.

The last member of the on-stage team was C.P. Lacey, who, as the Apollo's Executioner, had the task of clearing the ‘bad’ talent off the stage. CP bills himself as a comedian and celebrity impersonator, and opened up the second half of the evening with a very good impression of James Brown. Apparently he also does an impersonation of Tina Turner. Now that would be something to see!

Having watched a few Amateur Night contestants via YouTube, I must say I was a little apprehensive about attending this event. Let me explain why. As a singer-songwriter and occasional performer myself, I know just how hard it is to walk onto a stage and perform before an audience. A whole multitude of doubts and insecurities must be overcome before you can brave the stage lights and sing and play competently for anything up to a couple of hours. And remember, I’m talking about performing before an audience who – for the most part – are on your side even before they walk in the door. As a rule, these audiences do not come primed to boo you off the stage if you are not quite up to scratch, or fall short of their expectations!

The night kicks of with the “Child Star of Tomorrow” segment. Reserved for children between the ages 5 and 15, our host, Capone was quite clear about the rules governing this section of the event. No booing was allowed, but as much cheering and support as the audience was willing to give was encouraged.

Of the three acts who took part in the ‘Child Star’ segment on the night I attended (), the clear winner was 12 year old Veronica Oreliana. Following a note perfect performance filled with passion and emotion belying her young age, the audience exploded into a thunder of well deserved applause and roaring cheers. Actually, Veronica had us eating out of her hand from the very beginning, and throughout her song we cheered and clapped with raucous abandon. It was a testament to Veronica’s performance that she wasn’t distracted by the audience and was able to complete her song without faltering.

Short clips of the winning performances are can be seen on this blog via my next entry...

And just because I can embed it here, take a look at Veronica singing an unaccompanied version of the song, Beautiful...

I’m sure Veronica has the potential to turn into a great entertainer if that is what she chooses to pursue as she gets older and continues to mature.

Every week, during the break between the Child Star of Tomorrow segment, and the main event, audiences are treated to a big screen tribute to a former star of the Apollo. On this night the homage was for the Hispanic percussionist, Tito Puente.

Tito Puente was a Latin Jazz and Mambo musician. The son of native Puerto Ricans Ernest and Ercilia Puente, of Spanish Harlem in , Puente is often credited as "El Rey" (the King) of the timbales and "The King of Latin Music". He is best known for dance-oriented mambo and Latin jazz compositions that helped keep his career going for 50 years. He and his music appear in many films such as The Mambo Kings and Fernando Trueba's Calle 54. He guest starred on several television shows including The Cosby Show and The Simpsons. [Source: Wikipedia]

And now to the main event. At the completion of the 2010 Amateur Night season, the overall winner takes home a cash prize of $10,000 – the first time the Theater has offered such a substantial cash reward. So a lot is at stake for each of the performers appearing throughout the year in the lead up to the finals.

I’m not going to give a blow by blow account of every act that appeared during the night, but I will offer my overall impressions and observations.

Firstly, Amateur Night audiences can be brutal, and contestants literally have seconds to get the audience onside. Hit a bum note, or come across as a poser or ‘pretender’, and the crowd will put you in your place immediately. Some performers were able to persist through the booing to win back some audience approval at least long enough to complete their song.

Secondly, choosing songs with ‘me’ lyrics go down much worse than songs with ‘you’ lyrics, and any song which includes the line “I love you” tends to get a very good response, if only because it allows the performer to point to the audience as they sing those lines. It makes it much harder for an audience to boo you if you are telling them how much you love them!

Thirdly, given a competent performance, overwhelming numbers will win over solo performers every time. This was demonstrated clearly when the eleven member dance group, Dance Demensions won the July 14 Amateur Night contest. Assuming each member of the group was represented in the audience by 20 people (immediate family, extended family and friends, etc), then it is clear they already had a sizeable section of the audience on their side before they even took to the stage.

I’m not suggesting they did not deserve to win. Their routine was energetic throughout, and every dancer gave 110 per cent. I’m just pointing out the math involved. Effectively, the two runners up, Cat Stratakis and Jocelyn Jenkins were each outnumbered 11-1, and winning against those sorts of odds is always going to be very difficult. Come to think of it, since the two women were competing against each other as well, that then makes the odds of winning, 12-1.

Winners are chosen by the audience by popular acclaim. That is, at the end of the night (and at the end of the Child Star of Tomorrow segment), all performers are brought back onto the stage and the audience chooses the winner by making as much noise as possible for their preferred act. Again, the no booing rule applies during this process, although not everyone abides by it. Like I said, it's a brutal process, but then the music industry can be even more brutal on its stars and wannabes, so they might as well get used to it. 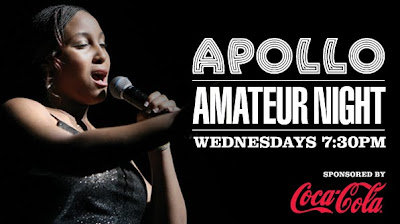 THE TREE OF HOPE
I can’t leave this review without mentioning The Tree of Hope. The legend and tradition of this tree stump apparently began outside the famous Harlem Lafayette Theatre which used to be located between 131st and 132nd Streets on .

The was then 's top show biz venue featuring African-American talent. The soon became the scene for aspiring actors, dancers and performers to mix, gather and exchange information and gossip. The Tree of Hope stood between the Lafayette Theatre and Connie's and black performers believed the tree to be the purveyor of good luck to those who stood beneath its branches. The tree came to symbolize the promise that held for millions of aspiring African-Americans. [Source: Apollo Theater website]

The tree was eventually cut down when was widened to accommodate the growing transport needs of . However, a large section of the trunk was saved, and this now stands on the Apollo stage, and sure enough every performer made sure they touched the ‘tree’ before beginning their song or dance routine, in the hope they might share in the good fortune of so many past performers.

To conclude, Amateur Night at the Apollo Theatre was great fun and a real blast. Getting the chance to see some real ‘stars of tomorrow’ just added to the occasion. Although Amateur Night has become a tourist attraction in its own right, for the performers and their families, the competition – with its $10,000 cash prize – is no game. Their participation in the event is a very serious affair.