Up A Lazy River to Bear Mountain 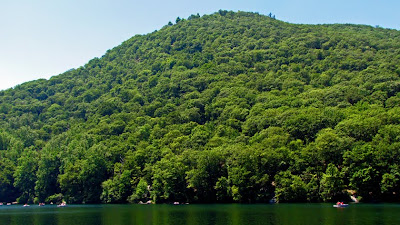 I saw it advertised one day

picnic was comin’ my way

“Come along ’n’ take a trip

We’ll bring you up there on a ship

Bring the wife and kids

Through another eight verses Dylan describes a picnic cruise that goes from bad, to worse, to disastrous.

I’m pleased to say the cruise I took to with the Classic Harbor Line on their beautifully appointed teak-decked yacht, was anything but a disaster. This nine hour, full day, round-trip cruise up the Hudson River to Bear Mountain began at 9.00am with an open breakfast buffet, a complimentary drink from the bar, and a three hour cruise that wound its way north through the Palisades and the lower Hudson River Valley.

The open breakfast buffet included fresh bagels and pastries, fruit, a waffle maker, fresh quiche and sausage, and coffee, juice and tea. Quite frankly, it was more than enough food for the passengers on board, and there was no need to ‘top up’ with other food purchases at the concession stands or café within the park when we got there. In fact, we were encouraged to take breakfast ‘leftovers’ like fruit and pastries ashore with us. 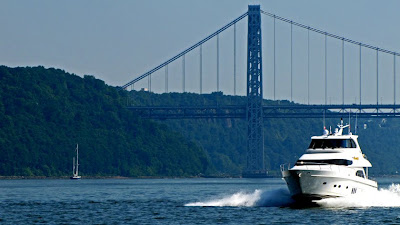 Image: Mucking around in boats on the Hudson River

It was a perfect day for mucking around in boats, and I had to feel sorry for the folks back in who were about to experience a sweltering day in among the concrete and glass canyons of . Meanwhile the lucky 30 or so passengers on the cruise were blessed with a cool breeze and smooth running, all the way to our destination.
After docking at , we were free to enjoy around two and a half hours exploring, hiking, or just relaxing. I never bothered with the , the jam-packed swimming pool, rowing boat hire, or the small on-site Zoo, but I did amble my way around and breathe in the fresh mountain air – laced with the smell of BBQ wafting across the lake from the dozens of family picnics taking place in the park. 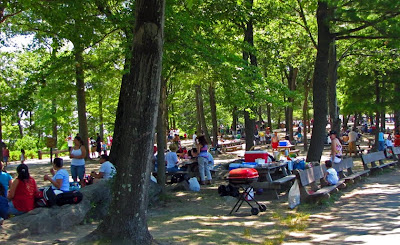 Image: I love the smell of BBQ in the morning!

Our cruise coincided with the post-Independence Day public holiday, and it is clear that has been a favourite picnic spot for New Yorkers, even long before Dylan wrote about it. Omar, a Honduran (see Special Thanks below) told me that apparently, on July 4th itself, the picnic site was full by , and park staff had to turn every other visitor away – which gives you an idea of just how popular the location is.

At the departed for the three hour cruise back to . Again, we were treated to a complimentary beverage from the bar and barbecue picnic buffet! As if that wasn’t enough, an hour or so before disembarking we were also offered dessert and fruit platters just to make sure we didn’t leave hungry. 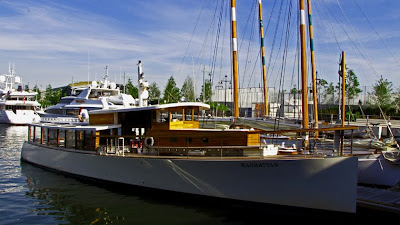 Image: The at anchor near Piers

The is a newly built (2006) 1920’s style “commuter” yacht, which aims to reproduce the Gilded Era of Yachting (the company description, not mine). The boat features an enclosed, cushioned observatory surrounded by large windows and skylights which makes it very easy to take in the stunning views on both sides of the river. Of course, passengers could also sit on deck if they chose to.

Caveats
1. The company website and brochures advertise a three hour break at . However, if it takes longer to reach the park, that delay is subtracted from the nominal three hours to ensure the still leaves at for the return cruise to . A practical example: Although our trip left on time at , it was 15-20 minutes late reaching due to prevailing weather conditions. Therefore, our time at was reduced to around two and a half hours.

2. Even assuming a full three hours at , we were advised that passengers inclined to walk to the top of the mountain would not be able to complete the round trip within that time. Therefore, if you are a keen hiker, and want to climb , you will need to find your own way there, or travel with another company that allows more time to complete the climb.

3. Boat cruising isn’t for everyone. If you bore easily, sitting on a boat for six hours – no matter how luxurious the vessel – can seem interminably long. From time to time on our cruise, some folks read books and newspapers, dozed off, or distracted themselves from the cruise in different ways.

Others, myself included, were interested in watching the changing landscape and looking out for the unexpected – like birds of prey soaring high over cliffs and escarpments; or trying to work out which of the numerous fortress-like buildings we passed was the notorious Sing Sing, maximum security prison. That sort of thing. 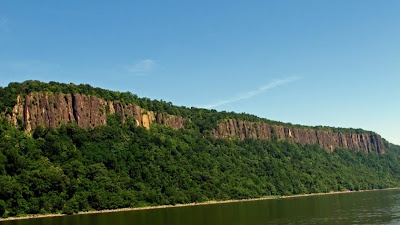 Image: High cliffs and escarpments; a small section of the

The Palisades, also called the New Jersey Palisades or the Hudson Palisades are a line of steep cliffs along the west side of the lower Hudson River in northeastern New Jersey and southern New York ... The cliffs stretch north from Jersey City (where their emergence is called Bergen Hill) approximately 20 mi (32 km) to near Nyack, New York. They rise nearly vertically from near the edge of the river and are among the most dramatic geologic features in the vicinity of ... [Source: Wikipedia]

As we cruised past the Palisades, described above, I couldn’t help thinking that it probably hadn’t changed much since Henry Hudson and his crew sailed up the river for the first time 400 years ago. It was sobering to imagine the Native Americans who must have been watching from the safety of the dense undergrowth or cliff tops, trying to work out who or what these people and their strange vessel represented.

What Is Not Included?

Apart from the complimentary drinks at the start of the cruise and on the return trip, any additional mixed drinks could be purchased from the open bar. Gratuities (tips) are also not included in the overall cruise price, but are greatly appreciated by crew members.

A special shout-out to Omar from , who was generous enough to offer a complete stranger (me), a soda and something to eat. I accepted the soda, but not the food since we would be eating on the trip back to . Gracias, mi amigo.

And an extra special shout-out to fellow passenger, Marlyn, who also took the time to say ‘hello’ to a complete stranger on the long trip to and from Bear Mountain. It was lovely having someone to share the ride with, and it certainly made the day more memorable for me, and hopefully for her as well.

The next cruise to is scheduled for , which just happens to be the annual North American Labor Day holiday. I highly recommend the outing for locals and visitors alike – especially if you are interested in doing something different on your vacation. Lines offers a wide range of cruising via their website so take a look and take the time to get out on the water.