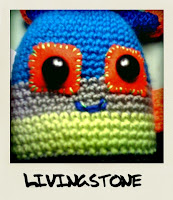 Intergalactic time traveler, Livingstone Cook is living the high life in New York City, and has taken time out from partying to send some happy snaps back to Shummy-Shum (as he affectionately refers to his mother).

Livingstone is already well travelled, having come from beyond the Pavo constellation. Unfortunately, he did get caught up in some recent sun spot activity which has caused major malfunctions to his internal guidance systems.

The other side effect of this incident is that it has left him with a body mass that has become extremely soft and pliable, giving him the appearance of a soft toy made from heavy ply wool with black beads for eyes. However, this transformation from an inter-galactic, state of the art, robotic alien has its benefits since it means he is now incredibly light and can fit into almost any space, which makes it east to tote him around with me wherever I go.

Written by Livingstone himself, here in his own words is a report of his first exciting taste of international travel.

Hello, mommy Shummy_Shum. It too hot in , especial if you come from ice-berg planet like me do. Me be getting out and over with Uncle JimJim – when he can bother to take me with he. 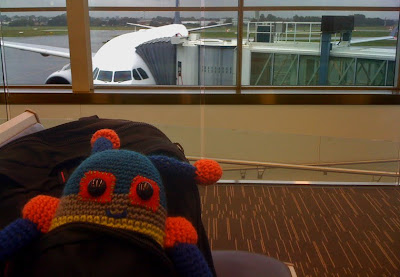 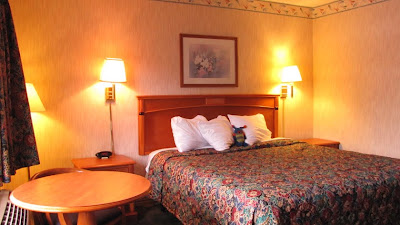 Image: Livingstone claiming the double bed in the Super 8 Hotel, for himself 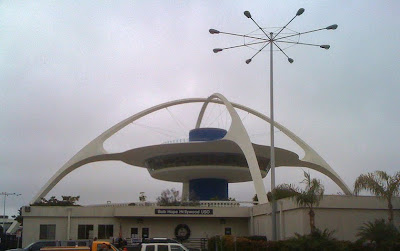 Image: The Bob Hope Hollywood USO at LAX. No, Livingstone, you can’t catch it home! 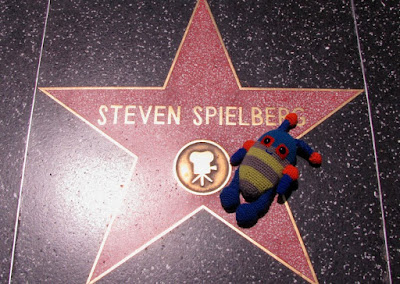 Image: Livingstone have a quiet word with Steven Spielberg on

Me be meet with Steven Speelberg! He be Me big and bigger hero. In Pavo Constellation Mr. Speelberg top earth director for all space comedies. Always. Me favorite comedy be E.T. and Close Encounter. Me laugh fit to get busted! Good jokes, Mr. Speelberg.

Pleese, scuse Me poor inglish. Livingstone inglish is get better but not best yet.

Yes, I know. Riveting stuff, isn’t it? Still I promised Livingstone that he can contribute one blog post each week detailing his adventures and unique insights (yes, that’s a joke). With a bit of luck it may at least stop him from nagging me constantly about ‘going home’. It seems to be working. Right now he is working on his next entry which includes .

I bet you can’t wait.