Visiting Attractions On A Budget in New York City 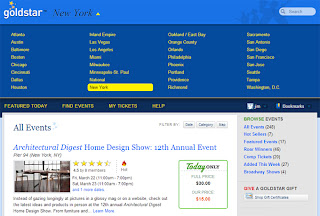 After hotel costs, transport and food, one of the biggest additions to the cost of any travel is the cost of sightseeing and visiting city attractions. In a city like New York, which has more places to visit than one could reasonably expect to see in a life time of travel, any system that helps reduce costs has to be worth looking at. In this post I want to write specifically about my two favorite ‘go to’ sites that offer the chance to score tickets to a wide range of events at vastly reduced prices. These are TKTS and Goldstar.

Most visitors to New York City, and the locals living there full time, are aware that discounted tickets to many New York theatre productions – including popular Broadway shows – can be found by visiting one of the city’s TKTS outlets. 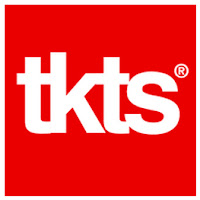 All locations sell tickets at 50%, 40%, 30% and 20% off full price (plus a $4.00 per ticket service charge, which helps support other TDF services and programs. Availability and ticket inventory change throughout the day and are always at the discretion of individual theatre productions. Currently you are not able to purchase discounted tickets to shows in New York City via the Theatre Development Fund website. You have to visit a TKTS Booth personally, or use one of the apps available for this purpose (see below).

GOLDSTAR.COM
Goldstar states that it has the largest online listing of half-price offers to live entertainment in the world, and I’m not about to argue with that. I first learned about Goldstar in 2010 while on a nine hour cruise from Manhattan to Bear Mountain (up the Hudson River) with the Classic Harbor Line, for which I had paid US$160.00. A fellow passenger, who had purchased her ticket through Goldstar had only paid US$90.00, for her discounted ticket.

Unlike TKTS, which only sells discounted tickets to theatre shows in New York City, I have since used Goldstar to buy discounted tickets to major league baseball games, theatre shows, roller derby events, harbor cruises, and more. As I write, Goldstar are selling tickets for the three hour Bateaux New York Dinner Cruises during March and April priced at around $99.65-$103.65, compared with the full price of $166.10-$172.75. Considerable savings by any measure. Alternatively, the Central Park Walking Tour they are also currently selling is half priced ($22.50 instead of $45.00) for dates during March and April.

The really great news is that again, unlike the TKTS Booths which are only available in New York City, Goldstar offers discounts to hundreds of events in more than 30 cities across the United States. These include Austin, Chicago, Dallas, Los Angeles, Philadelphia, San Diego, San Francisco and Washington, D.C. An added bonus is that Goldstar tickets can be bought online through their website, and via their iPhone app (see below).

There’s an App For That!
Both TKTS and Goldstar have apps available to make it easy for visitors to purchase tickets without the hassle of joining long queues. According to information about the TKTS app at iTunes:

The Official TKTS app, available free of charge for iPhone, Android and Windows Phone, is the only way to get fast, accurate, real-time listings of all Broadway and Off Broadway shows available at the world-famous TKTS Discount Booths in New York City. The Official TKTS app is directly linked to the display boards at the TKTS Discount Booths, so what you're seeing, in real time, is exactly what the people waiting in line are seeing. 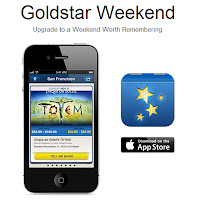 Note: This app is being marketed specifically as the Goldstar Weekend app, and as the name suggests, the app appears to offer event discounts for weekend performances only. Here’s what Goldstar themselves say about the app:

You might be busy this weekend, but a packed schedule doesn’t mean you have something fun to do, right? That’s where Goldstar Weekend comes in. Goldstar Weekend helps you discover and buy tickets to music, sports, theater, comedy and more in two minutes or less. Upon launch, you are taken to the closest weekend day. There you can browse up to 10 top events in your area, read about them and share with friends.

I myself have not used either of the above apps, so I can not offer comments or reviews of their ease of use or other comments. In fact, until I sat down to write this post, I didn’t know the two companies had apps, and for all I know the apps weren’t available when I was visiting New York City during the summer of 2012. However, I have used the TKTS booths while in New York City, and in the case of Goldstar, I have always made a point of pre-booking events via the full website, before my arrival in the city. Using the Goldstar website, you can purchase discounted tickets non-weekend events.
Posted by Jim Lesses at 12:41 PM