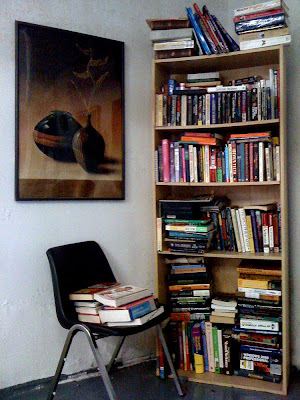 ~ Image: Bookcase in basement of apartment

It is my understanding that most, if not all apartment blocks in have shared laundry facilities located in their basements, and the apartment block I am staying in is no exception. However, I don’t know if all basement laundries have a shared bookcase stuffed with books for apartment residents to read, and contribute to.

The image on the left is of the bookcase in the laundry of the apartment I am staying in, where I estimate there are probably 200+ books.

In amongst the usual suspects (Mary Higgins Clark, V.C. Andrews, John Grisham), you will also find outdated text books and computer manuals (Windows 2000, anyone?); and discarded travel guides for and . Then there are books representing the abandoned hopes of dreams of budding actors and thespians, as indicated by the grandly named Actor’s Book of Contemporary Stage Monologues, and The Actor’s Scenebook, along with a copy of Samuel Beckett’s Waiting For Godot (I wonder if every New York apartment laundry has a copy of that one?).

Of course, you will also find a selection of ‘bringing up baby’ books, starting with books on pregnancy, before moving on to baby’s first year, and so on up the age range.

But just in case you think the bookshelf is filled with such fare, be assured that amongst the dross there are also some great titles, including The Pesthouse by one of my favourite authors, Jim Crace. Here is a partial list of some other great reads: Joseph Conrad’s Heart of Darkness; Arthur Miller’s Death of a Salesman; and Beneath The Wheel by Herman Hesse (Wot? No Siddhartha?). Sorry, no, maybe someone has borrowed it. There is a copy of Ernest Hemingway’s A Moveable Feast; a couple by Tom Wolfe, I Am Charlotte Simmons, and Bonfire of The Vanities; The Muslim Discovery of by Bernard Lewis, and Arundharti Roy’s The God of Small Things.

Clearly there are some well-read residents here.

But the piece de resistance is Kathleen Meyer’s 1989 book (in its 2nd Revised Edition, no less), called How To Shit In The Woods. Seriously. Billed as “An environmentally sound approach to a lost art,” (I think it’s probably safe to assume that few New York apartment laundries have copies of this book), Kathleen outlines the best way to deal with the perennial problem facing hikers, travelers, campers, and road warriors of all types; and that is, How do you dispose of your body’s most precious waste products in a safe, healthy and environmentally friendly way?

Fascinating stuff, this. I don’t know if it ever made it to the top of the New York Times best seller lists, but it certainly deserved to. There’s even a chapter called, For Women Only, How Not to Pee in Your Boots.

Did I read it? Does a bear shit in the woods? Of course, I read it. While her advice to women to practice peeing standing up has some merit, I suspect that if she was writing the book today, she would also recommend women pack a Shenis with them.

What is a Shenis? I’m glad you asked

The Shenis was invented by a woman (of course) and looks like a 12 inch pe… Well, you don’t need me to describe it when you can visit the Shenis website and check it out for yourself...

Of course, YouTube was not around either in 1989, when the book was published. Today if you search for “Shenis” on YouTube, not only will you find numerous examples of women putting the product to use, but also videos of women successfully peeing standing up!

Who would have thought a trip to the laundry could be so interesting?