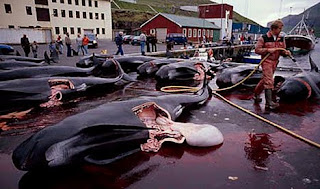 ~ I'm not big on boycotts. But today I became aware of a ‘festival’ so bizarre and disgraceful that I think the country that hosts it, deserves to be boycotted until the event is stopped.

The event in question is the annual pilot whale/dolphin killing festival which takes place in the Faroe Islands. The islands, sometimes Faeroe Islands, Faroe(s), or Faeroes are an island group situated between the Norwegian Sea and the North Atlantic Ocean, approximately halfway between Scotland and Iceland. The Faroe Islands are a part of the Kingdom of Denmark, along with Denmark proper and Greenland.

The atrocious slaughter you see depicted in the image illustrating this post, has been practiced since at least the 10th century, with around 1,000 creatures killed annually in the “grindadráp” (whale hunt) typically occurring during summer months.

Not surprisingly, the hunting of pilot whales/dolphins by residents of the Faroe Islands has long been a subject of controversy, and for good reason.

Although the International Whaling Commission enacted a ban on commercial whaling in 1986, pilot whales seem to be exempt because technically they are members of the dolphin family. To compound the problem, the Faroe Islands is one of the parts of the world where the IWC's rules still allow for subsistence hunting of such cetaceans.

As usual, supporters of the hunt maintain that the practise of killing pilot whales is "an age-old communal, non-commercial hunt aimed at meeting the community's need for whale meat and blubber." They also claim the animals are dealt with so quickly that their pain is brief, and that whale meat accounts for a quarter of the Faroe Islander's annual meat consumption.

Conservationists, on the other hand charge that the hunts, which take hundreds of whales at a time, are barbaric and pointless; that "the practice is outdated, cruel and unnecessary for a place with one of the highest standards of living in Europe." As if that is not enough, most of the whales go to waste - either being left on the beach to rot or thrown back to sea after they are killed.

While the Scandinavian countries have long been on my list of regions to visit, I for one will never visit Denmark, the Faroe Islands, or Greenland while this atrocious practice continues.

Visit this site for more images and links to videos which show this barbaric event in all its gruesome detail.
Posted by Jim Lesses at 11:41 AM