NYC Day 36: In Which I Go In Search of Frank Lloyd Wright 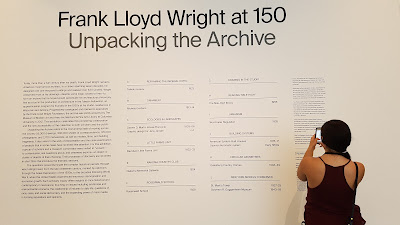 Click on images to view full sized
...
Yesterday I decided it was time I took a long, detailed look at the major Frank Lloyd Wright at 150: Unpacking the Archive, exhibition at the Museum of Modern Art. Wright was one of the most influential American architects of the last century.


Frank Lloyd Wright (born Frank Lincoln Wright, June 8, 1867 – April 9, 1959) was an American architect, interior designer, writer, and educator, who designed more than 1,000 structures, 532 of which were completed. Wright believed in designing structures that were in harmony with humanity and its environment, a philosophy he called organic architecture. This philosophy was best exemplified by the Fallingwater house (1935), which has been called "the best all-time work of American architecture". [Source: Wikipedia...] 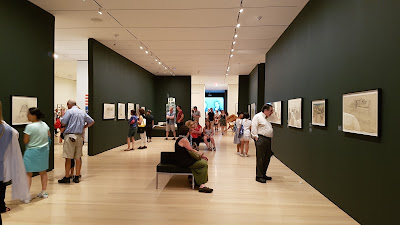 ...
I have had an interest in architecture for many years, and the more I travel the more I like to seek out great examples of the profession. Having said that, I have little interest in the smooth modern glass and steel buildings that are dominating the New York City skyline more and more as this century progresses. My favorite buildings, whether cloud busting skyscrapers or four and five storey walk-ups, tend to be survivors from the past two centuries. They invariably have features and facades that stop you in your tracks, and force you to pause and examine, and marvel at the skills of the masons, engineers, steel workers, and other tradespeople who laboured to construct these beautiful buildings. So it was with much interest that I devoted a couple of hours to Frank Lloyd Wright.

The exhibition presents hundreds of drawings, models, film, letters, documents and other memorabilia from the vast FLW archives that are now in the possession and care of the museum. And when I write vast, I mean vast:


Unpacking the Archive refers to the monumental task of moving across the country 55,000 drawings, 300,000 sheets of correspondence, 125,000 photographs, and 2,700 manuscripts, as well as models, films, and building fragments. It also refers to the work of interpretation and the close examination of projects that in some cases have received little attention. [Source: Info panel at the exhibition] 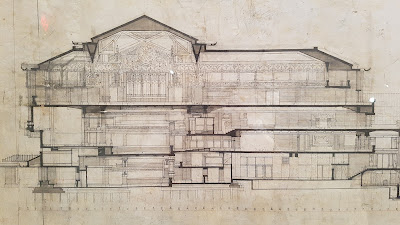 Above: A longitudinal section in ink and pencil for the Imperial Hotel, Tokyo, and below a detailed image for the peaked roof seen in the image above. 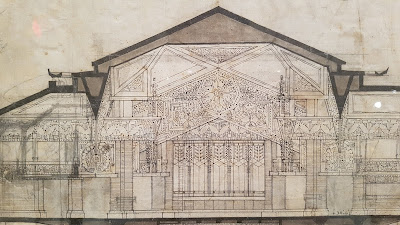 ...
As you might imagine, with so much material to select from, to say the current exhibition barely scratches the surface of Wright's massive archive is to state the bleeding obvious. The curators probably had no choice other than to present some of the better known works from among a collection that may stretch back to the beginning of Wright's architectural career. A period of some 70 years.

I was particularly interested in his initial concept for one of his most famous buildings, The Solomon R. Guggenheim Museum on Fifth Avenue. Early sketches show a building similar in design to the building as it stands today, but instead of rising to the equivalent of a six storey building, the early drawings show one that might rise as high as nine or ten storeys. 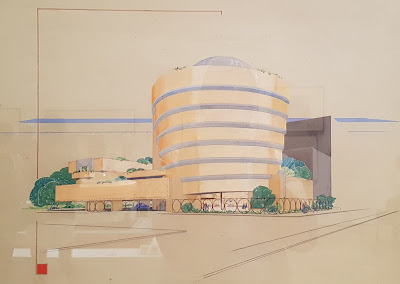 Above and Below: Early design concepts for the Guggenheim Museum. 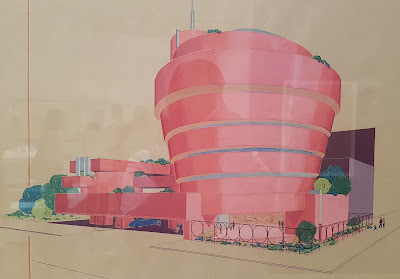 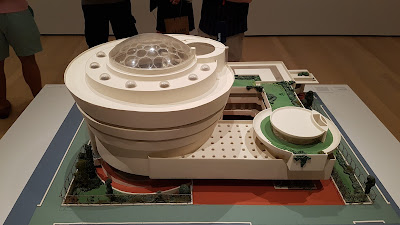 ...
Always one to think big, in 1956 Wright presented a concept drawing that was eight feet high! Executed in colored pencils and gold ink on tracing paper, Wright was proposing to build the Illinois, a 'mile-high' skyscraper on the lakefront at Chicago. His initial concept may not have been much more than a clever marketing exercise by Wright for his architectural practice, but it go plenty of attention when he unveiled his drawings and ideas back in 1956/'57. 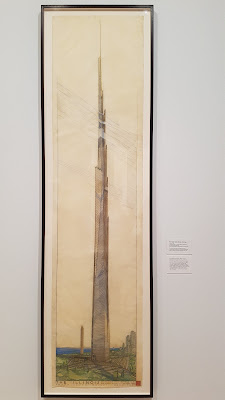 Above: This image does not do the concept of a mile-high building any justice whatsoever. Try to imagine the picture being eight feet high, 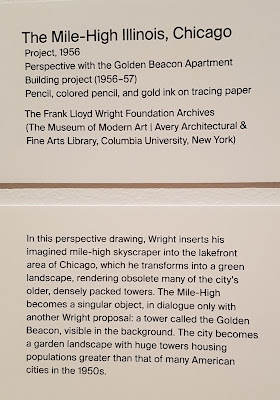 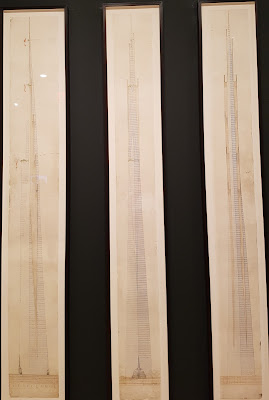 Above: other design ideas for Wright's mile-high Illinois building.
...
I very much appreciated the chance to examine the many drawings and renderings (such as the 'mile-high' building), at the exhibition. Modern architects use state of the art software to design their buildings which also allows them to spit out drawings and renderings with a few clicks of a mouse button. What gets lost in that process are the beautifully hand drawn designs one sees in Unpacking the Archive. While many of these drawings were almost certainly made by Wright's assistants, they stand as beautiful works of art in the own right. 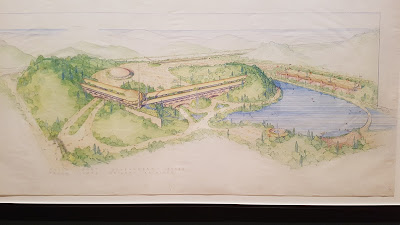 Above and detail below: Marin County Civic Center and Fairgrounds, San Rafael, California (1957). 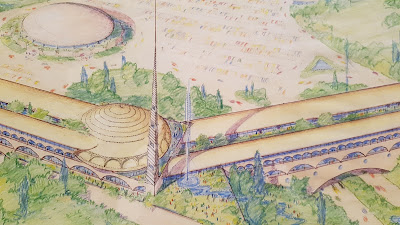 ...
There is much to enjoy at Frank Lloyd Wright at 150: Unpacking the Archive, even if you only have a passing interest in architecture. Children will enjoy looking at the models, while adults will gain a greater appreciation for Frank Lloyd Wright, and hopefully for all architects who design the homes and buildings we almost certainly could not live without in the 21st century. 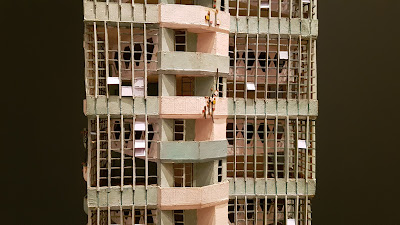 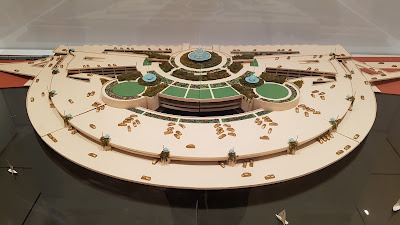 Any questions, comments or suggestions? How about complaints or compliments? Let me know via the comments box below.
Posted by Jim Lesses at 5:53 AM