NYC Day 25: In Which I Go Zapping For Dweezils 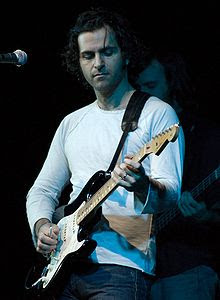 Dweezil Zappa—What’s In A Name?
Billed as “Storytelling with Guitar Accompaniment”, and to be followed by a Q&A session, today's main event at City Winery gave fans of the great Frank Zappa and his son Dweezil, an opportunity to learn about both their musical careers and accomplishment at this event..

Dweezil Zappa was born on September 5, 1969 in Los Angeles—the son of Frank and Gail Zappa. It was inevitable that from the moment of his birth that his life would be filled wall-to wall with music (his father having listed his religion as “musician” on Dweezil’s birth certificate).

What's in a name, indeed? Dweezil Zappa and {Someone-or-Other} Kennedy who was the Mistress of Ceremonies, provided an entertaining evening of questions and answers related to Dweezil Zappa's life, his own music career, and the life and career of his much acclaimed father Frank Zappa.

Dweezil spoke about his early years learning to play guitar, and recalled a seminal moment when he was 12 and Eddie Van Halen visited the family home. Van Halen gave him a guitar and also taught Dweezil a few classic Van Halen moves, all of which made a huge impression on the young boy.

He also recounted tales that did not reflect well on Lou Reed (who is regarded as something of a Rock God in New York City). Apparently Lou, in what came across as professional jealousy in Dweezil's stories, had a habit of making disparaging remarks about Frank Zappa's music and compositions. According to Dweezil, Reed had even make the comment that Frank Zappa 'couldn't write a hit song if he was given a year on a Greek island to do so'.

Dweezil was not able to explain the reasons behind Lou Reed's antipathy to Frank's music other than professional jealousy, since Frank Zappa was light years ahead of Reed when it came to musical ability. That Zappa never had a 'hit' as measured by the Billboard charts is of course besides the point. Zappa senior had no interest whatsoever in achieving that sort of ephemeral success. In a strange, and ironic twist to these stories, Dweezil recounted that when Frank Zappa was inducted into the Rock and Roll Hall of Fame, it was Lou Reed who was chosen by the organizers to deliver the induction speech. Dweezil did not say what his father, Frank thought about this.

Dweezil said that Frank recorded and released more than 60 albums during his career, but Frank's musical 'vaults', containing hundreds of studio and live concert tapes, had many more hours of music stored on them. What will happen to this music now is anybody's guess.

The most interesting and in some ways shocking parts of the evening were when Dweezil talked about the ongoing fight he is having with his family to be able to play his father's music. A fight that again proves the adage: You can choose your friends, but you can't choose your family.

I don't think Dweezil explained fully why it was that the Zappa Family Trust wants to stop him from playing Frank's music. In fact, they have been going to extremes in their attempts, going so far as to issue Cease and Desist orders for example, stopping him from using the phrase "Zappa Plays Zappa," and worse. The Trust, which is administered (if I remember rightly), by his brother, Ahmet and sister, Diva, has even gone so far as to try (unsuccessfully), to stop Dweezil from using his surname, 'Zappa' in all promotional material! Seriously, WTF!

Throughout the Q&A, Dweezil played brief instrumental guitar licks to illustrate his father's compositional style and abilities, but these moments were probably the least successful aspects of the night, since the music really only comes alive when played with a full band. I must say I enjoyed the evening more than I thought I would, and listening to Dweezil's stories made me determined to listen to more of his and his father's music, and to catch Dweezil in live performance when the opportunity presents itself.