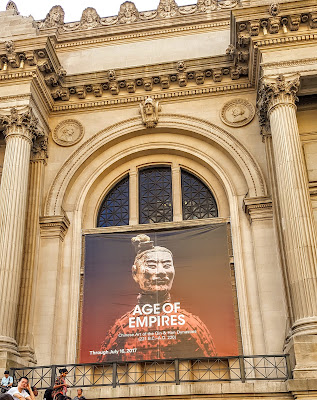 ...
ONE MONTH DOWN, TWO TO GO
Wow, Time flies when you're having fun, as the hackneyed cliche has it, and I have certainly enjoyed my first month in New York City. I seem to have settled into a relaxing daily routine that rarely sees me leave the apartment before 11:00am. Why rush? Especially when often I don't return to the comfort of my accommodations until eight to ten hours later. I generally have one or two main events in mind for the day, but I am just as happy to ignore both of them and sit and watch the daily life of the city unfold around me as I follow my whims, wander down unfamiliar streets, or explore buildings or stores for the first time. 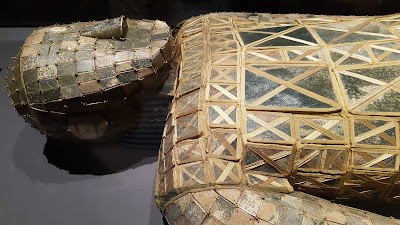 Images from the Age of Empires exhibition 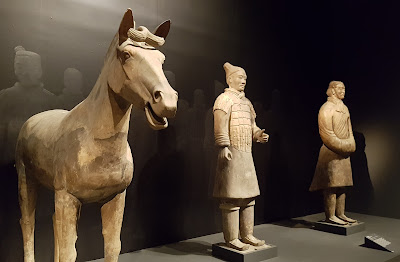 For example, after visiting the Met Museum yesterday to take in the Age Of Empires exhibition, a strolled across Central Park making a bee-line for A.G.Kitchen, a restaurant at 269 Columbus Avenue, which Google in its listing describes as a "Latin American Restaurant" whose "Neuvo Latino cooking and creative burgers are the attractions at this light-filled, modern eatery." The restaurant has been on my dining 'radar' ever since it popped up on my Twitter feed with images of some of the delicious looking meals produced by its creative chefs.

I thought I might spook the greeter at the door by telling him, "There's no pressure, but I've travelled all the way from Australia to eat here tonight!" However, like the true New Yorker he was, he just took my statement in his stride, laughed, and repeated. "No Pressure!" 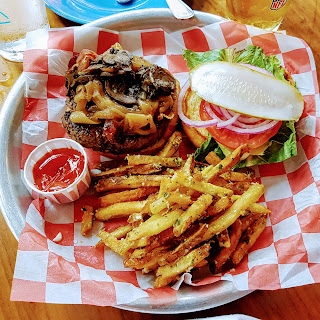 That Juicest Lucy Inside Out burger from A.G. Kitchen

I thoroughly enjoyed my burger and fries meal, which had been given the odd title, Juiciest Lucy Inside Out burger. The 'inside out' part referred to the cheese which had been inserted and cooked inside the beef patty. It added a lovely soft, creamy texture to the burger which I might just have to sample again before I leave New York.

From A.G. Kitchen I walked over to Riverside Park, which borders the Hudson River for many miles. I thought I could pick up an M5 bus on Riverside Drive that would take me back uptown, but I had miscalculated the point at which the bus route turned on to the drive, so it being a lovely evening I decided to walk for a while until I found an M5 bus stop.

During my stroll, I encountered an older woman working alone in a section of garden in Riverside Park, and stopped for a brief chat. It turned out that she was one of the thousands of volunteers who have dedicated themselves to maintaining and improving hundreds of city parks across New York City. Without these amazing volunteers, the city's Parks Department would have a much harder time keeping up with the massive amount of work needed to keep New York's parks looking so clean and beautiful. 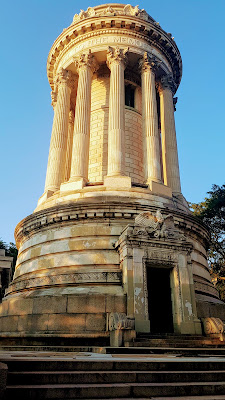 I was about to leave the park in search of a bus stop when I noticed a large structure towering over the landscape a little farther up the road. Never one to miss an opportunity to discover something new -- or at least new to me -- I continued walking until I reached the Soldiers' and Sailors' Monument that stands in the park right at Riverside Drive and West 89th Street on the Upper West Side. According to Wikipedia: The Soldiers' and Sailors' Memorial Monument ... commemorates Union Army soldiers and sailors who served in the American Civil War. The monument was completed in 1902.

Imagine my surprise and delight on reaching the monument, to find a gaggle of actors in period costumes that looked like they had been transported straight out of the pages of Alexandre Dumas's book, The Three Musketeers. 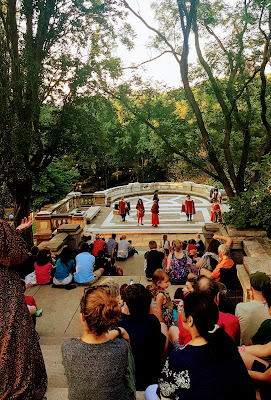 Part of the audience enjoying a performance of The Three Musketeers by members of Hudson Warehouse.

Oh. Wait. In a way they had been transported from the pages of that book, because I had just stumbled into the middle of Susan Lee's adaptation of The Three Musketeers, which was being performed by the Hudson Warehouse theatre company.

From the Hudson Warehouse website, the group's Mission Statement:


"Hudson Warehouse's mission is to provide quality, exciting, innovative, and affordable classical theatre to the community. The Warehouse believes theater is a "ware" and essential for daily life. To this end, the Warehouse doesn't sell tickets, but has a "pay what you can" policy because the arts should be affordable to everyone. Those unable to pay are still welcome because the Warehouse believes everyone deserves to have the theater experience, because theater is so essential to what makes us human."

I stopped for a break and joined 50 or 60 local residents who were already watching the performance, but since I had arrived late and missed most of the play, I continued my walk after ten minutes or so in search of the ever elusive M5 bus. I did learn however, that the play will be performed this week across four more nights from Thursday 20 to Sunday 23, starting at 6:30pm.

According to the poster I found pinned to a nearby fence, the Hudson Warehouse actors are also staging a series of performances of Shakespeare's Henry V, from July 27 to August 20 at the same location. Although the poster fails to mention performance times and days, I did learn that performances are staged Thursday to Sunday evenings from 6:30pm. 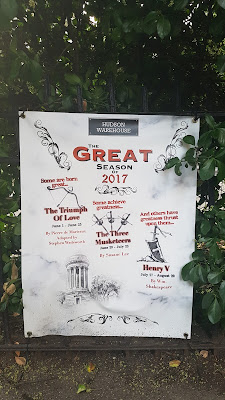 And that, dear reader, is how I spent Day 31 in the Big Apple.

On Day 32, Monday, I stayed in all day and frittered away the hours in inconsequential ways that are of no interested to anyone but myself. That this days' expenses were more than yesterday's can be put down to a fine Chimichanga and beer meal at the Refried Beans Mexican Grill at 591 Fort Washington Avenue, and a spot of grocery shopping at the Associated Supermarket store across the street. 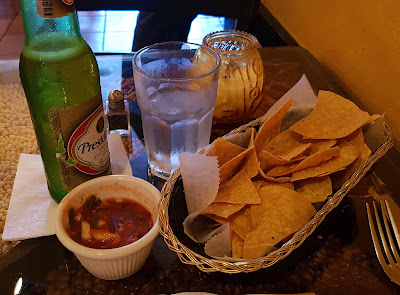 Above: Corn chips and spicy dip to get started. 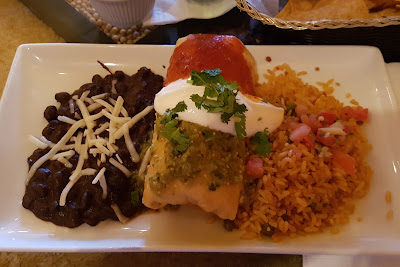 My very tasty chimichanga with beans and rice. 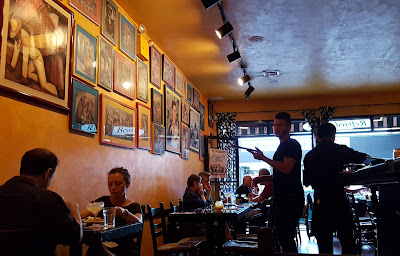 Some very famous Mexican artists are featured on this wall.

Any questions, comments or suggestions? How about complaints or compliments? Let me know via the comments box below.
Posted by Jim Lesses at 3:48 AM