NYC Day 23: Sunday in The Park and Native-Canadians at SummerStage

I made it to the Harlem Meer event in time to catch the performance by Something Positive before a very appreciative audience of mostly local Harlemites, and visitors to the city, like myself. Something Positive are described as an "...ensemble of international dancers, singers, and musicians [performing] a mix of Afro-Caribbean traditional and dance music with a blend of poetry, storytelling, and theater."

The show encompassed all of the above description, and the ensemble of five or six dancers, three percussionists, the leader singer/storyteller and a chorus line of three women, kept the mood party-like throughout the performance by encouraging audience participation by teaching us chorus lines to sing, and by getting audience members to get up and join the dancing at appropriate times. 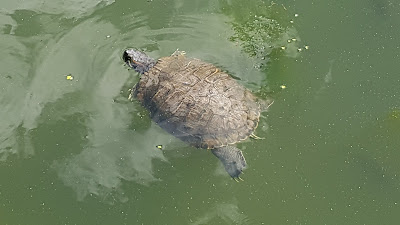 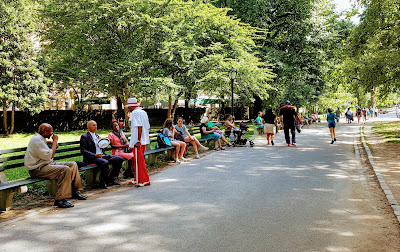 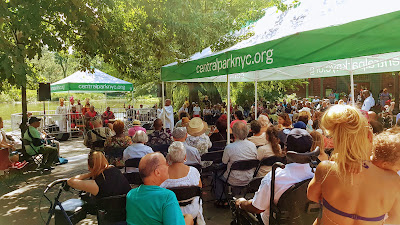 Conservatory Gardens, Central Park
From the Harlem Meer, I walked down to one of my favorite sections of Central Park, the beautifully maintained Conservatory Gardens. I find it impossible today to create a picture in my mind that depicts this area of the park as desolate, abandoned and dangerous. All words that once described the area before the Central Park Conservancy began to rehabilitate the area during the late 1980s and into the 1990s. Today the well manicured lawns, hedges, and vast swathes of flowering gardens are a delight to walk through and enjoy.


The Conservatory Garden is Central Park's six-acre formal garden. It is divided into three smaller gardens, each with a distinct style: Italian, French, and English. The Garden's main entrance is through the Vanderbilt Gate, on Fifth Avenue between 104th and 105th Streets. This magnificent iron gate, made in Paris in 1894, originally stood before the Vanderbilt mansion at Fifth Avenue and 58th Street.

The Italianate center garden is composed of a large lawn surrounded by yew hedges and is bordered by two exquisite allées of spring-blooming pink and white crabapple trees. A 12-foot high jet fountain plays on the western end of the lawn, backed by tiered hedges and stairs that lead up to a wisteria pergola. On the walkway under the pergola are medallions inscribed with the names of the original 13 states. 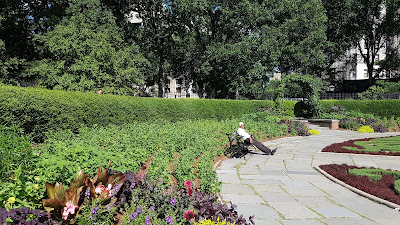 Above and Below: Conservatory Gardens in Central Park. 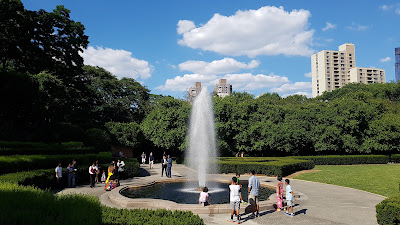 The northern, French-style garden showcases parterres of germander and spectacular seasonal displays of spring tulips, and Korean chrysanthemums in autumn, all within an ellipse of Japanese holly. In the center is the charming Three Dancing Maidens fountain by German sculptor, Walter Schott.

To the south is the very intimate English-style garden. There are five mixed borders of trees, shrubs and perennial plants, and five seasonal beds featuring spring bulbs that are followed by annual flower displays. A slope of woodland plants lines the western edge of this garden. At the center is sculptor Bessie Potter Vonnoh's lovely Frances Hodgson Burnett Memorial Fountain, a tribute to the author of the children's book, The Secret Garden. The children — a girl and a boy, said to depict Mary and Dickon, the main characters from the classic — stand at one end of a small water lily pool. 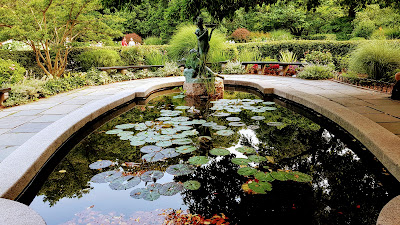 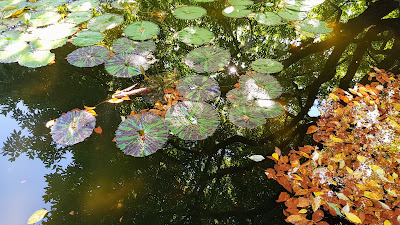 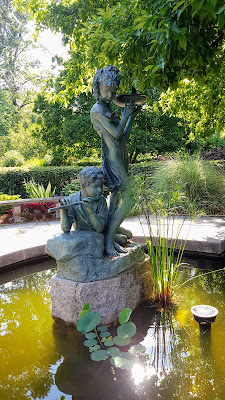 From the Conservatory Gardens it was time to make my way towards the evenings main event, a celebration of contemporary Native-Canadian culture at the Rumsey Playfield, where three acts from north of the border were getting ready to rock the night. The event was just one of a hundred or so free concerts in the annual SummerStage [www.summerstage.org/] series of concerts that take place across all five New York boroughs. First up was Iskwé. 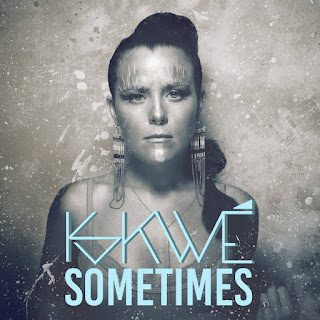 
Hailing from Winnipeg in central Canada, the wonderfully diverse Iskwé is of Irish and Cree/Dene lineage. Her full name, in Cree, translates to “Blue Sky Women”; Iskwé alone means “women,” and she chose this solitary moniker to represent both her culture and passion for shedding light on female causes and struggles. Strongly attached to her origins and spirituality, the skilled singer/songwriter instills her work with powerful elements of her heritage. Her voice is potent and luminous, her style a jazzy medley of trip hop and R&B. She attributes her inimitable sound to her “mixed indigenous and Irish ancestry,” as this cross-cultural experience had made an indelible mark on her life and music. A perfectionist with her work, her first album, the self-titled 2013 masterpiece Iskwé, took eight full years to produce. She subsequently released several singles to address the everyday atrocities that indigenous women must endure, including the heartbreaking 2015 track “Nobody Knows.” Her stage performances are bold and stunning; in tandem with her vital music, often she strikingly paints her face in the tradition of her Cree people. 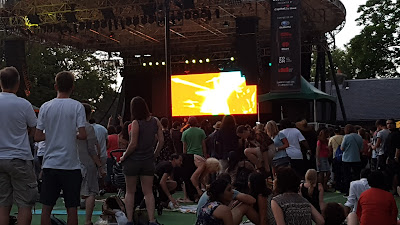 
Oh, Canada! For those unfamiliar with “pow wow,” a chanting & drumming performed by North American Native people, Ottawa-based A Tribe Called Red will whole-heartedly introduce you to it – mixed with electronic rhythms, hip-hop, moombahton, reggae and dubstep, naturally. Their gloriously inimitable sound (which some refer to as ‘powwow-step’) has been transforming urban club culture in Ontario and beyond, helping electronic music fans to significantly broaden their horizons. The present roster includes DJ NDN, Bear Witness and 2oolman, and with their fantastically feral live shows/parties (replete with original, politically inspired visual art pieces and videos), they have been disseminating their message of aboriginal heritage embracement through wildly fun music. 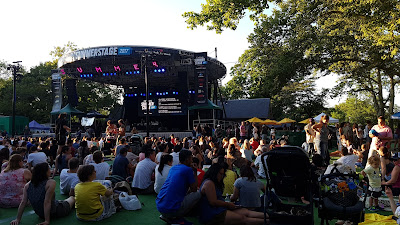 The SummerStage performance space and part of the audience waiting for the show to kick off.

Buffy Sainte-Marie looks at things differently. Since her very first release in 1964, It’s My Way, this luminous singer-songwriter, a member of the Cree Nation in Saskatchewan, Canada, has viewed music as not just a means of personal expression, but as a way to effectively disseminate messages of peace to the global community. A prominent activist, pacifist, educator and visual artist, she split time in the ‘60s between NYC’s Greenwich Village, and Toronto’s equivalent, Yorkville. While performing next to the likes of Neil Young, Leonard Cohen and Joni Mitchell, she naturally set herself apart from other “folk” musicians, with a sometimes ephemeral, sometimes booming voice rife with culture, history and visionary ways of viewing humanity and our relationship with the earth. A Juno, Golden Globe & Oscar winner, Sainte-Marie has been recognized as an innovator with her protest anthems (“Universal Soldier”), her startlingly honest take on addiction (in the much-covered “Cod’ine”), her incidental pop-crossover mega-hit “Up Where We Belong,” and her most recent album Power in the Blood, a beautifully unapologetic look at identity and our place in the universe.

Tonight's show marked the third time that I have seen Buffy Sainte-Marie in concert, and I continue to be amazed by the power of her high-energy performances. I've said it before, but I'm happy to repeat the observation that I'm sure is not unique to me: Buffy Sainte-Marie may be in her mid-70s, but you would swear she was thirty years younger, so dynamic is she as a live performer.

This is one singer that I am more than happy to see for a fourth, fifth and subsequent times if the opportunity presents itself.