...
The Film Forum (at 209 West Houston Street, New York), is one of the city's great independent movie theaters. It began in 1970 as an alternative screening space for independent films and it has stayed true to that mission ever since. During July, the Film Forum programmed a wonderful series of films around the theme New York in the 1970s, and screened more than 40 now classic movies from that era. These included the obvious choices such as Martin Scorsese's Mean Streets and Taxi Driver, along with great films like Midnight Cowboy, The Taking of Pelham 123, Manhattan, and many others. I had every intention of seeing a dozen or more of these films but in the end only got to one of the final double-bills on the program: Escape From New York, and The Warriors. 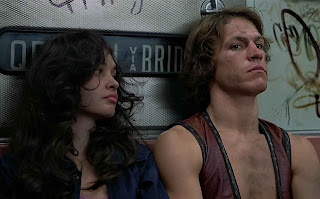 Deborah Van Valkenburg (Mercy), and Michael Beck (Swan), in The Warriors.
...
John Carpenter's Escape From New York (1981), was a starring vehicle for Kurt Russell, and also featured Lee Van Cleef, Ernest Borgnine, Isaac Hayes, and Donald Pleasence. I have seen the film numerous times on DVD, but it has been more years than I can remember since I saw it on a big screen. The Warriors on the other hand is a film I had never seen. It was directed by Walter Hill in 1979, and was a lot of fun if only because the film has not aged well.

Like that other great classic, Easy Rider, the film is let down by its very dated jargon and language that may have seemed hip and 'with it' in 1979, but just seems silly in 2017. Also the young, mostly male actors, emote like they are fresh out of acting school. It has to be said that the few female actors in the film did better in that regard than their male counterparts. Speaking of which, I was delighted to see one of my favorite female actors, Mercedes Ruehl in only her second film. Later in her career Mercedes won an Oscar for Best Actress In A Supporting Role, for her part in Terry Gilliam's 1991 movie, The Fisher King. 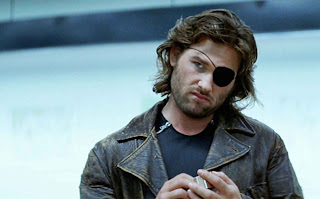 Kurt Russell as Snake Plisskin in Escape From New York
...
As for Escape From New York, this is a film that has aged much better. But first a brief synopsis: The year is 1991, and crime in America has become so rife that the island of Manhattan has been turned into a maximum security prison. Which has been completely walled off from the rest of the country. Air Force One, carrying the president (Donald Pleasence), has somehow been hijacked and is brought down on the island, but before the plane crashes, the president escapes in a special pod that lands inside the walls of the island prison. Kurt Russell (as Snake Plisskin) is sent in to rescue the president.

As Escape From New York began, I couldn't help but wonder what effect and emotions the early scenes might be evoking on an audience of mostly local New Yorkers. In these scenes, what passed as state-of-the-art computer graphics in 1981, depict Air Force One crashing into a high-rise building. Later, as he sets off to find the president, Kurt Russell has to land a glider on top of one of the twin towers, and the scene can't help but evoke memories of September 11, 2001, in spite of the primitive special effects used.

From the Film Forum I considered heading back to Columbus Circle and the Lincoln Center where the second evening of the current Lincoln Center Out Of Doors program was  getting underway. In the end I decided to walk over towards the Hudson River, and take in the views. 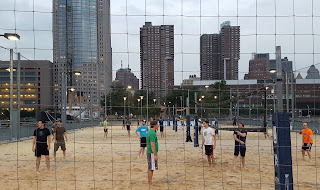 Above and below: Volleyball and playing fields at Pier 26. 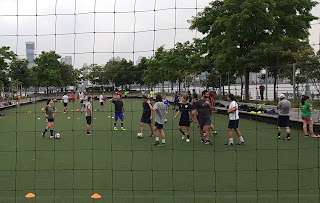 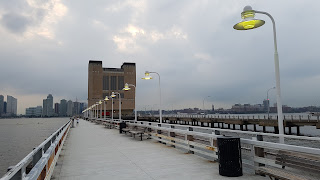 This structure, and three others like it, help extract exhaust fumes from the Lincoln Tunnel as it passes below the Hudson River linking Manhattan with New Jersey.
... 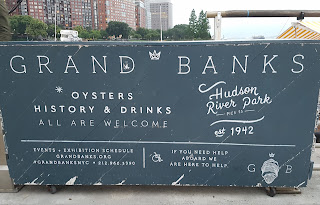 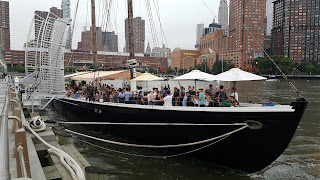 Above & below: 'Grand Banks' floating restaurant and party boat. 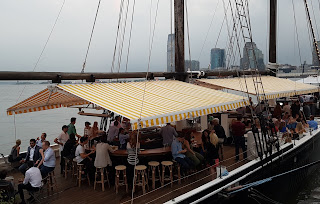 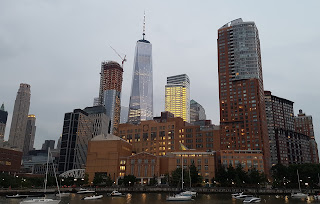 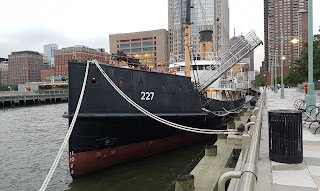