NYC Day 43: In Which Seaport and Singers Mix Together Harmoniously 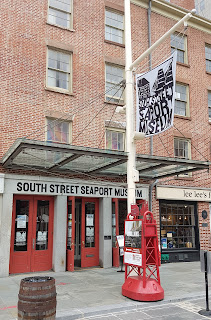 Click on images to view full sized.
...
I went to the South Street Seaport Museum intent on taking advantage of their Free Friday offer (from 3:00pm to 7:00pm), although I did give them a donation at the end of my visit.


South Street Seaport Museum's collections consist of over 26,500 objects documenting the rise of New York as a port city, and its role in the development of the economy and business of the United States through the social and architectural landscapes. The collection includes paintings; drawings, prints and photographs; manuscripts and ephemera; ship models; scrimshaw; navigational instruments and shipwright tools; and many historical objects related to trade from the Seaport itself, including those from the Fulton Fish Market, the coffee and tea industry, and letterpress printing and advertising industry, which supported the growth of New York as a financial powerhouse.{Source: Museum website} 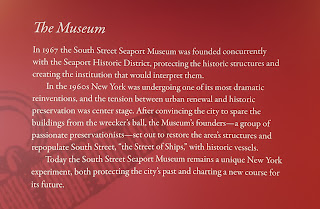 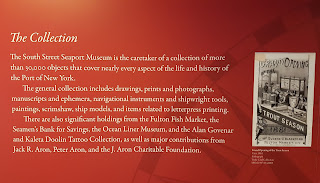 ...
I started by going aboard the clipper ship, Wavertree. This is a magnificent ship by any standard you care to nominate. I was surprised by just how big the deck area was. It looked wide and vast, and for a ship that is more than a hundred years old, it is in wonderful condition. Mind you, the Wavertree has recently undergone a multimillion dollar overhaul, and it shows. The rigging is new, the decks are clean and well maintained, and everything looks ship shape and ready for sea. 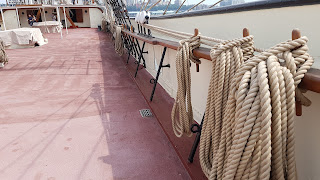 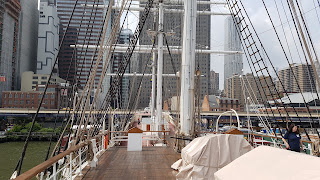 ...
I was disappointed that visitors could not go below decks and look around, although that may change one day. Mind you, there may not be anything to see below decks apart from empty holds and storage areas. While you can't go deep below decks, you can enter the cabin area for the ship's captain. There is not a lot to see apart from small, empty cabin areas, which leave visitors to wonder; if the captain of the ship is confined to spaces as narrow and as confined as these, what sort of cramped accommodations did the crew have to contend with below decks?

I have no idea whether the museum intends to fit out the captain's cabin with rebuilt sleeping quarters and other fittings that give a better picture of life on board these types of ships, but I hope they do, if only because the already small rooms will become even more cramped and claustrophobic when fully restored. 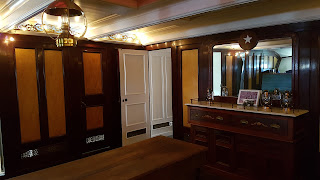 Above: The Captain's quarters.
Below: The ship's galley, or kitchen. 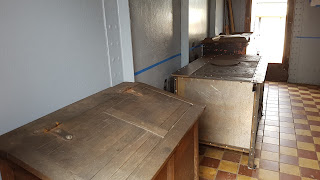 ...
From the Wavertree I spent some time examining several small exhibitions at the museum's main building. There is extensive information here about the refitting of the Wavertree, and an exhibition called Millions: Migrants and Millionaires Aboard The Great Liners, 1900-1914. This exhibition examines the contrasting conditions on board these mighty ships of the sea for two very different groups of travellers.

Either I missed the entrance to other parts of the museum, or the museum has reduced the size of its exhibition and display areas considerably, because there was a lot more of that 26,000 plus collection to see and discover at the South Street Seaport Museum when I visited the building back in 2010. I suspect the museum is still recovering from the damage caused by Superstorm Sandy in October 2012, when a storm surge of water that rose more than seven feet devastated low-lying areas of New York City including the seaport district. 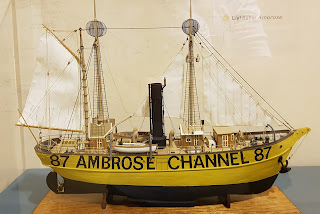 ...
Apart from the Wavertree and the main building, the museum also has an extensive program of educational events including walking tours, dockside programs, sailing excursions on the Pioneer, an 1885 built sailing vessel, and the Lettie G. Howard, an 1893 built schooner, and other events. 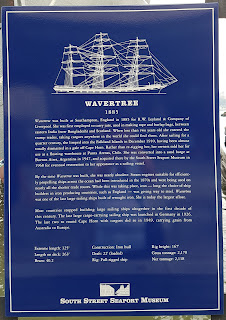 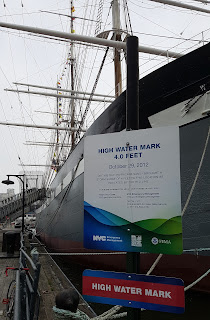 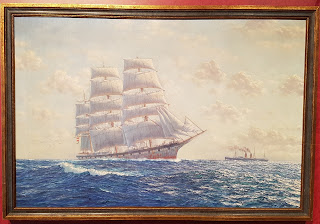 Above: The fully rigged Wavertree under sail, by the Australian artist Oswald Brett.
Below: One of several historical images showing damage to the Wavertree after it was dismasted while rounding Cape Horn in 1910. 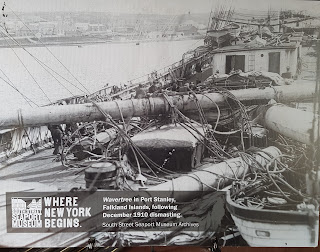 ...
Free Music Fridays at The American Folk Art Museum
From the South Street Seaport Museum I went and had a late late lunch, or early early dinner - take your pick, after all it was 4:00pm - and then decided to head back to the American Folk Art Museum near Columbus Circle, where the museum's Free Music Friday was due to begin at 5:30pm. Performing this night were Kalyani Singh, Richard McGraw, and Rachelle Garniez. 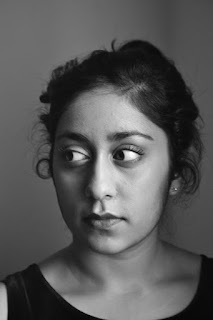 ...
I got there a little late to find Kalyani Singh, a young 21 year old of South Asian heritage already performing. I was immediately captivated by her very distinctive voice and songs. The melodic structure of some of the songs reflected her Asian heritage, while her high soprano voice was clear and bright and reminded me of a young Joan Baez. I was also very pleased that her songs were not the types of works that are often full of youthful angst, and maudlin lyrics about failed love affairs. A topic that plagues far too many songs by young performers. 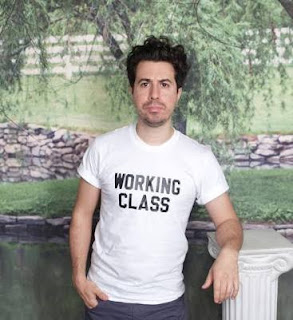 ...
Kalyani was followed by Richard McGraw whose catchy songs, quirky lyrics and unusual melodies soon has the audience trying to work out whether he was in fact working out his angst onstage and writing and performing songs as personal therapy. After all, one of his albums bears the title, How To Suffer. Or maybe he was just having us all on, because his songs were anything but maudlin. Richard was not afraid to teach the audience several refrains during his set and have us join in at the appropriate time, and he too, soon won the audience over with his easy stage manner by the time his 35 minute set was over. 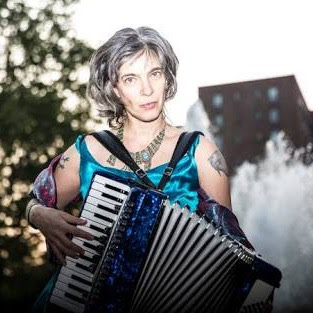 ...
The final act for the evening was Rachelle Garniez. When she began singing I realized that I had seen her performing somewhere before, but it was only when she mentioned that she had been performing at the Bryant Park accordion festival just last week that I remembered. I had missed that performance, but I had seen her playing at the same festival during my visit to New York last year. If Richard McGraw's lyrics were quirky, then Rachelle's were wonderfully idiosyncratic. Accompanying herself on accordion, guitar, and keyboard (not all at the same time!), Garniez has a voice that darts high, low, and all the stages in between. Her songs constantly surprise, both lyrically and melodically, and are full of wry observations and sly digs at real or imaginary ex lovers.

The American Folk Art Museum says about these free sessions: Music featured at the Free Music Fridays series thematically reflects the spirit of the self-taught art on view at the museum. I have been meaning to catch these free Friday music nights for several weeks, but always seem to be elsewhere. However, now that I have seen the quality of the performers, I am determined to attend several more before my visit is over.

Although I stopped buying CDs on a regular basis some years ago, I just had to purchase one CD each from both Richard McGraw (How To Suffer), and Rachelle Garniez (Sad Dead Alive Happy). Kalyani Singh has yet to release an album, although she has recorded three songs which are available via her Bandcamp page (see link below).