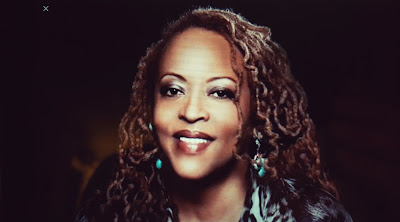 CASSANDRA WILSON AT BLUE NOTE JAZZ CLUB. 131, West 3rd Street, New York.
I have long wanted to see the Jazz chanteuse Cassandra Wilson in live performance, and on this date I finally did.

In a show that lasted barely one hour, Wilson and her five piece band presented a virtuoso performance that barely scratched the surface of her vast recording career. I have no complaints about the choice of songs (after all, I am almost completely ignorant about her musical career, other than to say that I have been aware of her as a much acclaimed artist for many years). And I certainly have no issues with the incredibly talented ensemble playing for her, especially the brilliant violinist whose surname I did not catch but whose first name was Charlie. But I would dearly have liked to have experienced a longer show from Ms Wilson. 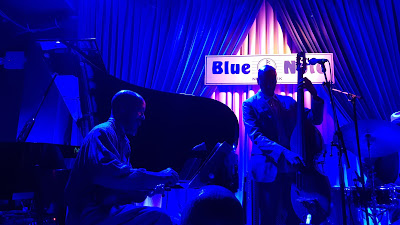 Members of Ms Wilson's ensemble warm up onstage.
Photography during the show was strictly forbidden.

This was my first visit to this famed institution. The Blue Note Jazz Club. It has been located on West 3rd Street since it first opened in 1981. Wikipedia provides more information:


Blue Note Jazz Club is a jazz club and restaurant located at 131 West 3rd Street in Greenwich Village, New York City. The club was opened on September 30, 1981, by owner and founder Danny Bensusan, with the Nat Adderley Quintet being the featured performers for the night. The club’s performance schedule features shows every evening at 8:00 pm and 10:30 pm and a Sunday jazz brunch with performances at 12:30 pm and 2:30 pm.

History
Bensusan's belief was "that if he brought big acts into a comfortable environment with great food, he could pack the house night after night." The Blue Note was soon established as the city's premier jazz club, with Dizzy Gillespie, Sarah Vaughan, Carmen McRae, Canadian-born drummer David Mendel, Dan Frieber, Lionel Hampton, Oscar Peterson and The Modern Jazz Quartet among prestigious regular performers there. Bensusan booked Ray Charles for a full week every year. It is still considered one of the world’s most famous jazz venues and one of the best known and most expensive in New York.

Well, it certainly wasn't cheap. To date, this event has been the most expensive during my current visit with a total upfront cost coming in at $126.60 (approx AUD$165.60). This includes the $55 ticket, meal+two beers, tip, and state taxes. I say 'up front cost' deliberately because my bank's foreign transaction fees still need to be added to this amount. Still, I can live with all that. I'm just saying, an extra 20 to 30 minutes from Cassandra Wilson would have made for a more perfect night. But thank you, Ms Wilson, it was a real pleasure -- while it lasted.