SENIORS FREE FIRST MONDAY'S @ THE RUBIN MUSEUM, 150, West 17th Street.
I caught a 1-train the 19th street station which was less than a couple hundred yards from the Rubin museum. The museum provides free entry to seniors (normally USD$10.00) on the first Monday of each month, and I was more than happy to take advantage of the offer. I have been to the Rubin Museum on previous visits to New York and enjoyed my visit enough to make a return trip today. The two new major exhibitions this summer are The World Is Sound, which is part exhibition, part sound installation. The second exhibition, Henri Cartier-Bresson: India in Full Frame, features sixty-nine photographs taken by this much acclaimed photographer during several trips to India from the late 1940s through until the early 1960s. 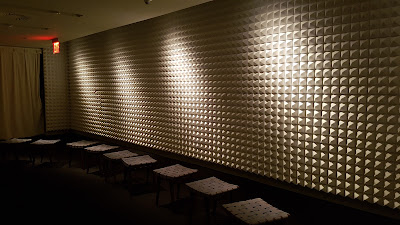 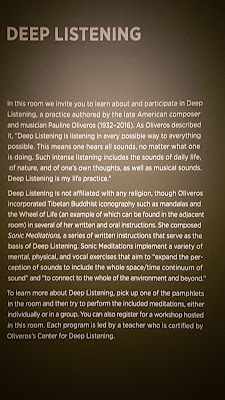 The World Is Sound
This exhibition/installation juxtaposes sound art and Tibetan Buddhist ritual music cyclically, that is, from creation to death to rebirth. The work explores different dimensions of sound and listening and its many functions in Tibetan Buddhism. Some of the key concepts and terms explored through the exhibition encourage visitors to focus on ambient sounds, microtones, electronic music, drones (the musical type, not the modern flying craft), rhythm and polyrhythm, tone and timbre, and more besides.

I was particularly interested to learn about the late Pauline Oliveros's concept which she called, Deep Listening. The brochure for this part of the exhibition contains four exercises that visitors can employ to help them focus deeply on tuning in to the sounds around them. One of these exercises she called, Ear Piece, and asks thirteen questions that encourage Deep Listening. Here are the first five and final two:
And so on, until the final two questions: Are you listening to sounds now or just hearing them? And... What sound is most meaningful to you?

Even working through the first five questions is harder than I thought it would be. After all, we live in a world where it is virtually impossible not to be surrounded by sounds that are loud, intrusive and constant. Especially here in New York City! 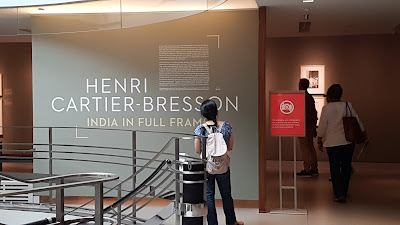 Henri Cartier-Bresson: India In Full Frame
In 1947 Cartier-Bresson (1908-2004), co-founded the renowned Magnum photographic agency. Later that year he went to India for the first time and was in Delhi in January 1948 to meet with and photograph Mahatma Gandhi, who despite his diminutive physical size was one of the towering political figures of the 20th century. While Cartier-Bresson was not present when Gandhi was assassinated by a Hindu nationalist on January 30, 1948, he was certainly present to document the subsequent funeral and the massive crowds of mourners who gathered to witness Gandhi's traditional cremation ceremony. 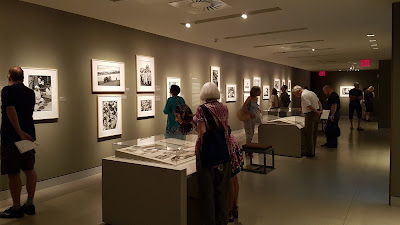 Above and below; images from the Cartier-Bresson exhibition 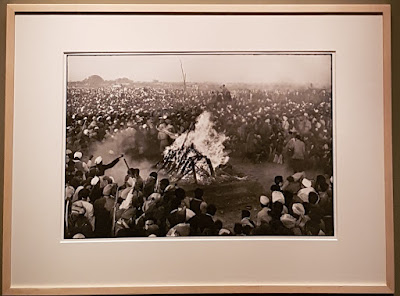 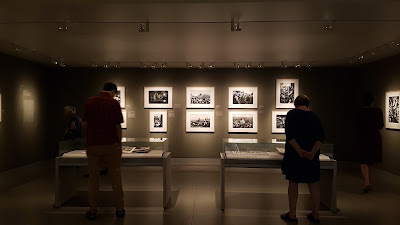 These images, and many others cemented Cartier-Bresson's reputation as one of the great photographers of the last century, and a selection of images from that period form an important part of the current exhibition at the Rubin Museum.

Many of the other photographs from the late 1940s capture a country that was right on the cusp of major political change, as India struggled to get out from under British colonial rule, a campaign that Gandhi was heavily involved in. For students of history, and of British colonial history and how that impacted on the Indian subcontinent, these images will surely be of interest. However, I suspect that other visitors will mostly regard them as historical curiosities - though hopefully interesting ones.

But Wait - There's More!
Apart from these two major exhibitions, the Rubin Museum also has a permanent collection of fascinating drawings, paintings, statuary and more from Tibet and other nearby regions that make this museum worthy of a visit. Like similar institutions, the Rubin programs a full calendar of ancillary events ranging from free (and fee paying) musical performances across a range of genres, film screenings, classes, lectures, events for children and families, and an annual Block Party that also includes free entry to the museum. This year the Block Party (which takes place on West 17th street between 6th and 7th avenues), will be on Sunday, July 16, from 1:00pm to 4:00pm.