NYC Day 19: In Which I Wander from one Museum to Another via Central Park 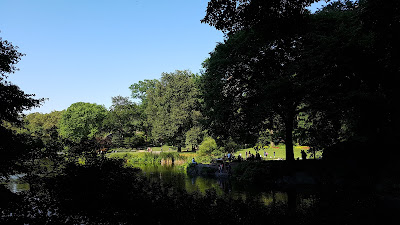 My list of things to do today included some free jazz music at the American Folk Art Museum, and more free music at the Rubin Museum of Art (part of their Spiral Music Series). In the end I missed both of them due to a very slow start to my day. Instead I elected to visit the Met Breuer again, but left my arrival so late that I barely got in 45 minutes of quality time at that address.

In fact, all I really got to do with spend some time with the Brazilian artist Lygia Pape, and her exhibition and wonderful Tteias installations as seen below. This work uses metallic thread woven in columns from floor to ceiling or wall to wall. Placed in a darkened room and dramatically lit, Tteia 1, C (as the work in this exhibition is called), is composed of golden thread that appear luminous and ethereal, like beams of sunlight entering a room. The photo does it do this huge installation justice so if you have a chance to see the work for yourselves, I urge you to do so. 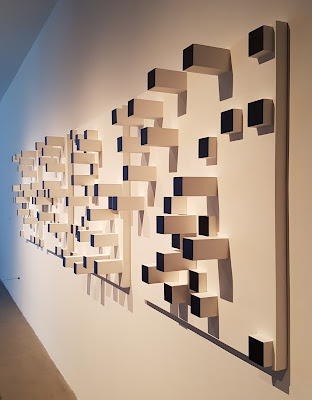 Above: A series of four works called Book of Paths (and numbered 1-4)
...
From the Breuer I decided to walk across the lower part of Central Park and slowly make my way towards Columbus Circle where I planned to get something to eat. One of the many things I love about New York City is the way the city has a way of undermining all your favorite perceptions about the city and its people. Personally I think you can blame Hollywood and the major television networks for an endless series of crimes shows that portray the city in a less than favorable light.

My experience however, reveals a city of (mostly) well maintained parks and gardens, some equipped with dog runs and almost all the larger ones equipped with playgrounds and water features for the little ones, or basketball courts for the older teens and young adults. The really large parks may have baseball or softball diamonds, and from what I have observed they are always well patronized and popular. 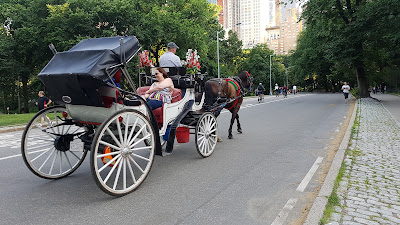 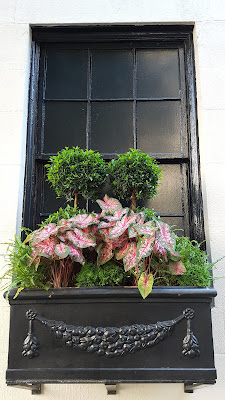 ...
Of course, the other side of this idyll is also plain to see: trash filled rubbish bins spilling their styrofoam containers, plastic cutlery, takeaway coffee containers, and plastic and glass soda bottles (most, if not all of which could be redeemed for the .5c deposit). The ever present wail of emergency service vehicles, the incessant blaring of car, bus, and truck horns, the rumble of the underground subway trains (or the 24-hour overhead roar of trains on the few remaining elevated lines in the outer boroughs, and on and on and on. Oh, and let's not forget the rodents and roaches, and the doggy-doo that one has to keep a constant look out for since many dog owners still refuse to 'Curb Your Dog', as the sidewalk signs urge. 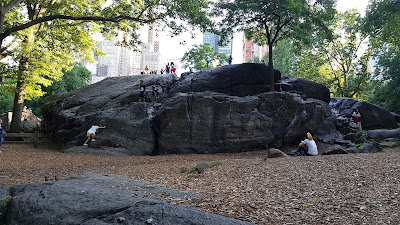 Above and below: The bedrock of Manhattan is super hard stone called Gneis, or Manhattan Schist.
These outcroppings in Central Park give you a sense of what really lies beneath the city.. 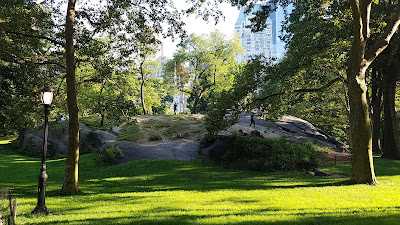 ...
Having rambled across Central Park, and then finding myself in the vacinity of Columbus Circle, or more accurately in the vacinity of the Lincoln Center, imagine my surprise when I discovered that I was standing in front of the American Folk Art Museum. The jazz musicians were long gone, and once again I had around 45-minutes to check out the two major exhibitions taking place at the museum, but of course in I went anyway. 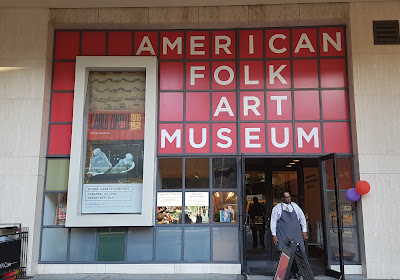 The two artists on show are men I have never heard of (a far more common occurrence than not). The Italian artist, Carlo Zinelli (1916-1974), is described by Wikipedia (www.en.wikipedia) as an "outsider artist who suffered from schizophrenia. The other artist on show, also now deceased, is Eugene Gabritschevsky (1893-1979), a Russian biologist by profession, and artist by sentiment. Obviously I did not have enough time to fully examine and appreciate the work of these two artists, but now that I have found my way to the museum, I will definitely return for a more leisurely look and write more then.

NOTE: My daily expenses do not take into account accommodation, transport, temporary phone account, or museum memberships since I am accounting for these monthly expenses at the end of each week. For the record these four line items add USD$28.45 or AUD$37.42 per day to my daily expenses. Maybe I should just include them in my daily account to avoid confusion. Maybe. I'll see how I feel at the end of this week.