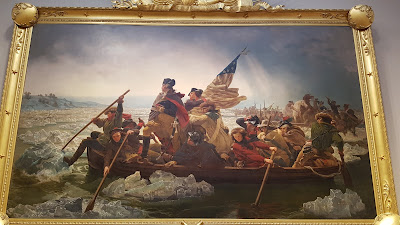 HAY FEVER BE DAMNED!
I did not bother to note in my last post that I thought I was coming down with something, and so it came to pass.

I went to bed last night feeling worse than I did before I left the house for the City Winery show, and this morning I awoke suffering from a full-blown allergic reaction to something in the New York air. Maybe my visit to the New York Botanical Garden, and Conservatory Gardens was not such a good move on my part. I spent the night trying to breathe with a succession of toilet tissue plugs pushed into my nostrils soaking up the gunk that oozed from somewhere inside my head. I slept on and off until 11.00am, and while the flood of snot, or whatever the stuff is, has eased for now (and is more white in color than green), I will be staying in today.

NEW YORK STEAK AT VICKI'S DINER
I was in no mood to cook for myself tonight, so I went to Vicki's Diner, and ordered a New York Steak with vegetables. Soup de jour was a good Greek vasolatha. The soup was lovely, but the steak was dry and over-cooked. I suppose I should not have expected much more from a short order cook, but we live and learn (mostly). Vicki and her head waiter are both Greek, although I couldn't work out if the waiter was her husband, father, or what. I do remember him from my 2010 visit, and I suspect that he has been working there for many years, as seems to be the case in many New York establishments. 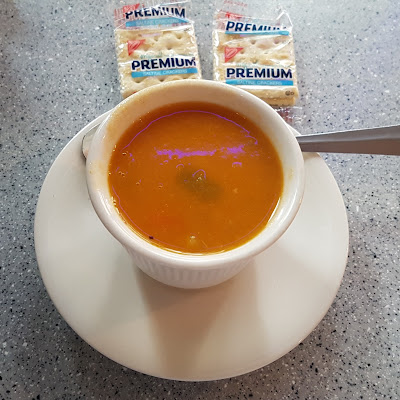 Above: a small pot (it was too small to be called a bowl) of a traditional Greek bean soup called vasolatha. 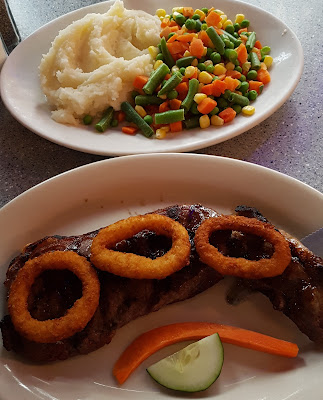 Above: Apparently this a New York Steak.

Here are today's many and varied activities that I missed:

Jazz+Wednesdays @ The American Folk Art Museum
2.00pm—3:00pm. During the run of the exhibitions Eugen Gabritschevsky: Theater of the Imperceptible and Carlo Zinelli (1916–1974), the Bill Wurtzel trio will perform music that celebrates the creativity and expressiveness of the human mind. Limited seating available.

Bryant Park Accordion Festival. Yes, this event has returned this year for another series of concerts on the Bryant Park stage. So far I have missed all of them!

Below, for your edification, I have included some images by the wonderful Greek artist known as El Greco. 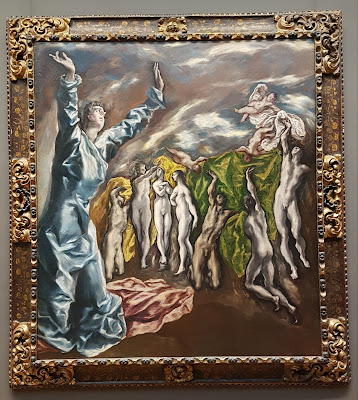 The painting is a fragment from a large altarpiece commissioned for the church of the hospital of Saint John the Baptist in Toledo. It depicts a passage in the Bible, Revelation (6:9-11) describing the opening of the Fifth Seal at the end of time, and the distribution of white robes to "those who had been slain for the work of God and for the witness they had borne." The missing upper part may have shown the Sacrificial Lamb opening the Fifth Seal. The canvas was an iconic work for the twentieth-century artists and Picasso, who knew it in Paris, used it as an inspiration for Les Demoiselles d'Avignon.

This intense portrait depicts Fernando Niño de Guevara (1541-1609), who was named cardinal and is dressed as such here. In 1599 he became Inquisitor General of Spain but resigned in 1602 to serve the rest of his life as Archbishop of Seville. The painting probably dates from the spring of 1600 when the cardinal was in Toledo with Philip III and members of the Madrid court. El Greco had lived in Venice and in the Farnese Palace in Rome, where Titian's portraits (such as those of the Farnese Pope Paul III) would have revealed to the Greek painter the psychological possibilities of portraiture. 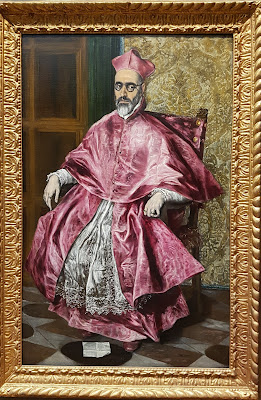 I awoke this morning feeling 100 percent better than I did yesterday. The flow of gunk from my nose had slowed to a dribble rather than a flood, and with or without the help of Zirtek, I seem to have turned the corner on this latest hyperallergic reaction to -- what? I have no idea what triggered this current debilitating episode of hay fever, but I'm happy to be over the worst of it. I was even thinking about where I might go today, until...

Until I went to the toilet, did my 'bizness', and went to flush the waste away only to find the water to the building had been turned off! You've got to be kidding!, says I to myself. But no, there was no water to be had. Luckily, I had some water chilling in the fridge which I was able to boil for a mug of tea (you didn't think I was going to waste it on the toilet, did you?), so I could at least enjoy a hot drink with my breakfast.

Now What? I hadn't showered for 36 hours, and I didn't fancy the prospect of descending into the hot and humid subway system unwashed and unclean, although gawd knows there are plenty of people in a worse state down there than I would have been. Just the same, I decided to wait it out, and hope the water would be back on before the end of the day. In the meantime there was nothing for it but to pull up a chair in front of the Edgestar portable air-con, and relax and continue reading Jim Thompson's very disturbing thriller, The Killer Inside Me, one of six books purchased so far during this trip.

Just after midday I tore myself away from my book with an, I wonder if...? To my delight, while the hot water was still off, the cold water was flowing freely which took care of a very foul looking (and smelling) toilet bowl. I decided that I should make the effort and head out for the afternoon, and what better place to go than back to an air conditioner Metropolitan Museum. I took a cold shower in water that was about one degree above freezing and walked to the nearby M4 bus stop. Now I know what you are thinking, dear reader. Why is this guy catching buses all the time, when the much faster subway system is available. Well, I'm glad you asked, so I will explain.

It's true that the subway system is fast and efficient. Unfortunately, the A-train which also runs close to where I am staying doesn't go anywhere near Fifth Avenue, where the Met Museum is located, and where several other major museums are also to be found such as the Guggenheim, the Museum of the City of New York, the Museo del Barrio and a number of others. However, to my great convenience, the M4 bus (once it reaches Fifth Avenue), runs all the way down that famous avenue, passing all those museums on Museum Mile, as that section of Fifth Avenue is known. Indeed, the M4 travels all the way to Midtown where it terminates at 34th Street/Penn Station.

The only real inconvenience with catching the bus is that it increases the length of time it takes to reach the museum I am heading to. Still, every cloud has a silver lining, they say, and since I tend to be an 'Always look on the bright side of life,' kind of guy, I have plenty of time to read my books, or just stare out the windows and watch New York City slide by in all it's raucous glory. Truly it can be said, that no two bus rides are ever the same. If nothing else, a ride of this type only reinforces the idea that driving cars in this city must be among the most stressful things any New Yorker can choose to do. Come to think of it, driving anything in this city has to be a major stressor. How there isn't an accident at every intersection I will never know.

Oh, and for the record, the M4 bus route passes up Madison Avenue, and runs all the way to Fort Tryon Park, Inwood, which, after visiting one of the museums on Fifth Avenue, also turns out to be a great convenience since I don't have to make my way across Central Park to Columbus Circle to board an A-train for the return journey to Washington Heights.