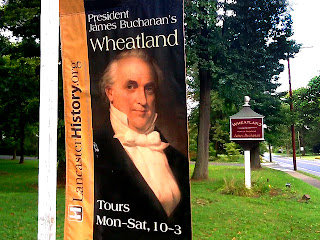 ~ During my stay in Lancaster, Pennsylvania, I went to check out Wheatland, the home of America’s 15th President, James Buchanan. With my usual impeccable timing, I managed to walk the mile and half from my hotel to Wheatland on the one day of the week the home was closed. Thankfully, the ten acre site is unfenced and visitors are free to wander the grounds and examine the exterior of the house and gardens, and the various outbuildings at leisure.

Constructed in 1828 by William Jenkins, a local lawyer, Wheatland, or the James Buchanan House, is a brick, Federal style house which was once surrounded by 22 acres of sculpted gardens and landscaped grounds. Today Wheatland shares its ten acres with the Lancaster County Historical Society.

James Buchanan purchased Wheatland in 1848, and lived in the house for next two decades―except for several years during his ambassadorship in Great Britain and during his presidency. Speaking of which: in complete contrast to the constant travel that modern presidential hopefuls embark on, Buchanan did not tour the country as part of his 1856 campaign. Instead, he conducted it from Wheatland as a "front porch campaign". In this age of instant communications, it boggles the mind to try and imagine how anyone could run a successful campaign for President from his front porch! 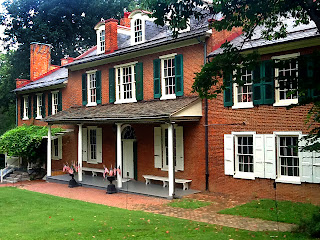 After his death in 1868, Wheatland passed through a succession of owners before it was acquired by a group of people who set up a foundation for the purpose of preserving the house.

Wheatland was designated a National Historic Landmark in 1961 and was added to the National Register of Historic Places in 1966. It was designated a contributing property to the Northeast Lancaster Township Historic District in 1980. The foundation and the adjacent historical society merged in 2009.

Wheatland was opened to the public on May 5, 1936 and was dedicated "as a new presidential shrine, taking its place with Mount Vernon, Monticello and The Hermitage," in October 1937.

Architecture and Décor
As already noted, Wheatland is built in the Federal style. Wikipedia has this to say about its construction:

As no documents on the actual construction are known to exist, the person or persons responsible for the design of Wheatland have remained anonymous. However, the architecture of Wheatland, as well as its location on the property, indicates someone who was skilled in classical architecture. Design elements, like various lunette windows, also show the influence of various architectural guidebooks that were prevalent in the early 19th century.

The Grounds
On the grounds, behind Wheatland, stand a privy, a smoke-house  and a carriage house. A stable used to stand on the property but was replaced by the carriage house in the late 1880s; an ice-house also no longer exists.

A bathroom, complete with bathtub, shower and a bidet, was installed in the west wing in 1884. Until this was done, the household and guests had to visit a large square privy built well away from the main house―for obvious reasons.

Making the best of a poor situation, I am happy I took the trouble to see Wheatland, but I am disappointed I did not have an opportunity to enter the house to get a sense of life in the mid-1800s. Again, Wikipedia offers this:

The interior of Wheatland is furnished as it would have been in the mid-19th Century, with most of the furniture being original to the house. As Wheatland has never been significantly altered or remodelled  other than the installation of modern lighting and heating, it provides an accurate view of the lifestyle in the Victorian era.

If you are visiting Lancaster, don’t do as I did―make sure you visit James Buchanan’s Wheatland while it is open! Having said that―unless I have missed it―the official website does not mention specific opening hours, just the start of the first and last guided tours. It is probably safe to assume that opening hours are 9 AM-5 PM, but don’t take my word for it, call 717-392-4633 to confirm this for yourself.

The Hours of Operation noted below are taken directly from the official site:

April through October
Tours are offered Monday through Saturday, on the hour, starting with the 10 AM tour.  The last tour begins at 4 PM.

And just to prove that my outing to Wheatland was not a complete waste of time, here is a brief video documenting my visit: