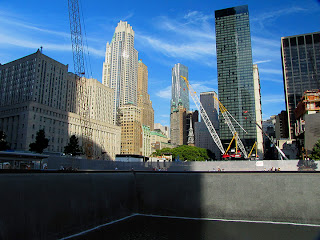 ~ I paid a visit to the National September 11 Memorial in New York City during August 2012. I expected to be much more emotionally affected by the site, but I wasn't.

On my way to the Memorial site, I also dropped into St. Paul's Chapel, a building I have visited on numerous occasions during my trips to New York, and here I was once more emotionally engaged with the Chapel and the displays there – although these seem to be shrinking as the years pass.

I think the difference between the two sites is that St. Paul’s Chapel connects with you on a personal level, partly because of its accessibility and scale, while the National September 11 Memorial is massive and almost impersonal - despite the almost three thousand names displayed there. Of course, the Chapel still stands, while the towers of the World Trade Center now only exist in our memories, and in the multitude of audio-visual artifacts that remain. 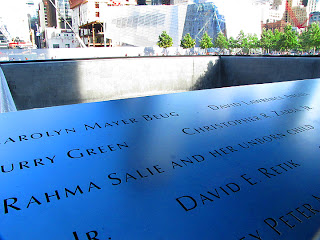 Clearly, visitors with a direct connection to the site will be much more emotionally engaged than myself, and indeed while there, I saw visitors making rubbings of the names of people they knew who were victims of the attacks. Also, once the museum, with its many artifacts and exhibits is finally open, I am sure the whole experience will be much more affecting.

I expect to return to the completed Memorial on subsequent visits to New York City, and I will be interested to see how the experience compares to my August visit. If you are visiting New York, a visit to the National September 11 Memorial is certainly worth the long queues and security checkpoints. Like other major memorial sites (war memorials, Holocaust memorials, and such), the Memorial serves to remind us of the tragedy it commemorates, and to keep alive the memories of the thousands of men, women and children (some unborn), who were victims of the attacks.

Here is a short video I made following my visit:

The song is Sweet Forgiveness, by one of my favourite artists, Iris DeMent… www.irisdement.com
Posted by Jim Lesses at 12:46 PM