In Review: Gone To New York 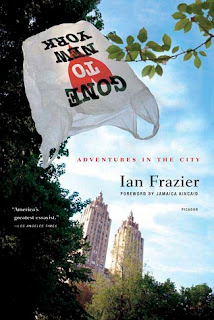 ~ I have only read one other book by Ian Frazier, and that was his paean to the American prairies called Great Plains

- a book I thoroughly enjoyed and reviewed here…

When I saw a copy of his 2005 collection of essays about New York City, Gone to New York: Adventures in the City

making the decision to buy it was easy.

Gone to New York collects together twenty-two essays that examine aspects of life in New York City that are by turns, poignant, funny, serious, and insightful. The essays come from a variety of magazine sources, including the Atlantic, and The New Yorker, for which Ian Frazier continues to write as he has since 1973. Each story in the book contains a year of publication, and these range from Antipodes (1975), to the 2005 essay, Out of Ohio.

Along the way we meet a succession of New Yorkers, each of which is unique in their own way. There’s George Willig, the man who scaled the World Trade Center in 1977 using handmade clamping devices; we learn about Clifford Holland, that man for whom the Holland Tunnel is named;  we meet Martin Tytell, who at 83 years of age in 1997 (when the essay Typewriter Man was written), may have been the last manual typewriter repair man in New York City. We visit crime scenes, take bus rides, walk Canal Street, and stop to remove plastic bags from trees.

Two of the most touching stories are To Mr. Winslow (1993), and Street Scene (1995). In the first essay, Frazier writes about Allyn Winslow, a forty-two-year-old drama teacher who was shot and killed one June morning, after refusing to hand his new bicycle over to four teenagers. In three brief pages, Frazier documents the creation of a memorial to Mr. Winslow, that appears over several days on the exact spot at which he died. He records items as they are added to the memorial by locals, who in most cases didn’t know Allyn Winslow personally, but who were still moved to remember his passing.

Then, over a period of five months, Frazier traces the gradual breakdown of the memorial as summer rains, vandalism, ongoing park maintenance, and winter storms slowly eliminate signs of the original location, so that eventually all trace of it disappears. And thus, with its final disappearance, one is left to wonder if anyone―apart from the writer―still remembers Mr Winslow.

[Image Right: The actress and singer, Bette Midler using a Bag Snagger to remove plastic from a New York City tree. Background to this photo is recounted in the essay, Bags in Trees: A Retrospective.]

In Street Scene, Frazier watches as a woman administers mouth-to-mouth resuscitation to an elderly woman who lies on a Brooklyn sidewalk. Assisting her is a young male who counts off “One, two, three, four, five,” as he in turn administers chest compressions in an attempt to keep the elderly lady alive. Eventually, an Emergency Medical Service truck arrives and the paramedics take over the life-saving work of the volunteer rescuers. Ian Frazier watches as the male and female part without a word, and go their separate ways. At least Frazier has enough presence of mind to approach the man to thank him for what he had done.

He then runs after the woman, who was by now well down the block: I tapped her shoulder and she turned and I said thank you. Her eyes were full of what had just happened. There were tears on her upper cheeks. She said something like, “Oh, of course, don’t mention it.” She was … an ordinary-looking person, but glowing beautifully.

Earlier this month in my piece Reflections From The Window Seat, I asked the question, “…when you travel, where do you prefer to sit: window, aisle or middle seat?.” I added that I am definitely a window seat traveller, and went on to elaborate further about why. In Frazier’s essay, Route 3, I was delighted to read this: I usually travel to and from the city by bus. Most bus commuters sensibly occupy themselves with newspapers, laptops, CD players, and so on. I always try to get a window seat and then look at the scenery. If this were a ride at an amusement park, I would pay to go on it.

Frazier then goes on to describe in detail the bus journey along Route 3 between his home and the city, and I got a lot of satisfaction knowing that I had found a kindred spirit when it came to the joys of window seat travel. Even if the journey was only between workplace and home.

It probably isn’t necessary to be a New Yorker, or to have visited the city, to get the most out of the twenty-two essays in Gone To New York, but it helps. Having said that, most people reading this have been to New York City, if only through the medium of Hollywood movies and countless television shows. It should not be too hard to imagine yourself walking along Canal Street with Ian Frazier, as he points out some of the streets quirkier characters, and grumbles about the plastic bag tangled in the branches of the tree you are passing under. Speaking of which, here is an American television news item which includes Ian Frazier and his friend Bill McClelland using a Bag Snagger to remove plastic from trees.

Gone to New York: Adventures in the City

is a delightful read, and is well worth seeking out either online, or through your local bookstore.

More Information
Ian Frazier at Wikipedia…
At The New Yorker…
At The Atlantic…
Ian Frazier on Facebook…
Bag Snaggers.Com…
Posted by Jim Lesses at 11:32 AM