NYC Day 59: In Which We Farewell Lincoln Center Out Of Doors for 2017 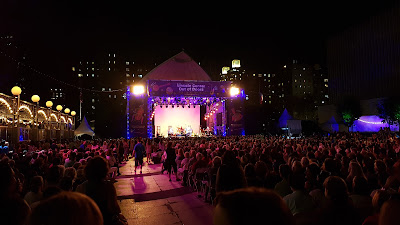 Close, but not close enough.
...
Sunday 13, August | Expenses $39.70 ($50.21)
I had pretty much made up my mind to have another day in today, but late in the afternoon I decided to make the effort and head out to catch the final Lincoln Center Out Of Doors performance for 2017. This featured the Memphis 'soul man' songwriter and performer, Don Bryant, and the multi-Grammy Award winner, and Rock and Roll Hall of Fame Alumni, Bonnie Raitt.

It was a great last minute decision by yours truly, only spoilt by the fact that seemingly half of Manhattan had decided to do the same thing. Okay, that's an exaggeration, but on arriving in the vicinity of Damrosch Park, the major outdoor performance space at the Lincoln Center, I was immediately stopped by the huge line of fellow hopefuls waiting to enter the site. I was further stopped in my tracks by learning that the line was not for the area set aside with seating (this was already at capacity), but for people hoping to get into the standing room only area. Fat chance 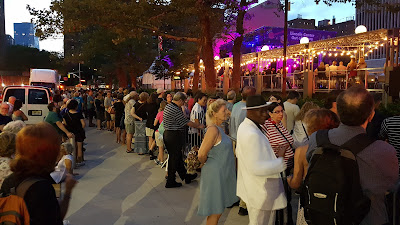 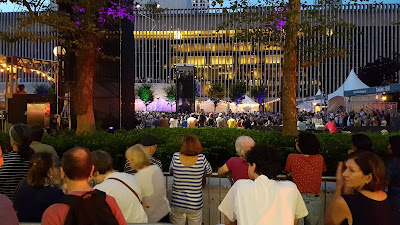 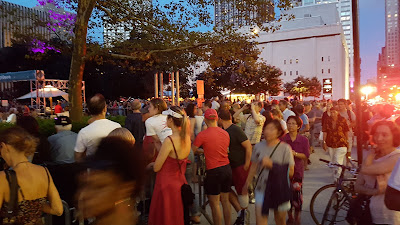 Above: Street views of the Don Bryant, and Bonnie Raitt concert at Damrosch Park.
...
In the end I gave up waiting in line and walked down the street alongside Damrosch Park, where I stood with hundreds of other frustrated music fans who were five deep along the sidewalk, listening to -- but not seeing --  Don Bryant and his band knock out a rocking set that had people on their feet roaring for more at the end of his performance.

Bryant was born in Memphis, Tennessee in 1942, which makes him another 75 year old soul man who sang and performed like a man half that age. Don co-wrote the Top 40 hit, I Can't Stand The Rain with Ann Peebles in 1973 (they married the following year). He had previously written 99 Pounds, and Do I Need You, for Peebles and wrote many other songs while a staff writer at Hi Records. Not content to rest on his laurels, Don Bryant recently released a new album, Don't Give Up On Love, to much acclaim. 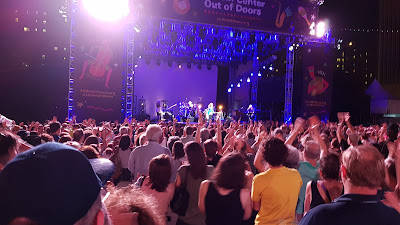 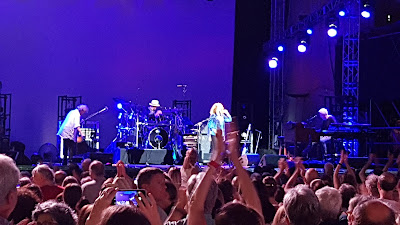 ...
I can't claim to be a massive Bonnie Raitt fan, and I won't even pretend that I am all that familiar with her musical output over more than 40 years, but I was more than impressed with her performance and her choice of songs, some of which went back to her earliest albums, along with a well chosen selection of songs by other groups and singers, including Talking Heads, INXS, John Hiatt, and others.

As the evening, and the performance progressed, some of the people out on the street began to head home, thinking that since they couldn't see Bonnie Raitt and her band, there was no point hanging around. As the crowd continued to thin out, and as a few people chose to leave Damrosch Park, someone made the decision to open the barriers and let those of us still out on the street enter the site.

Truly it is said that Patience is a virtue, and my patience was finally rewarded with a good view of the final 30 minutes of the show.

During her encore, she brought out her surprise guest, Marc Cohn, another Grammy Award-winning singer-songwriter. Marc is probably best known for his now classic hit song, Walking In Memphis from his 1991 debut album. Raitt and Cohn only performed one song together, and it wasn't Cohn's song, but nobody seemed to care. The evening ended not with a bang, but with a slow Texas waltz, and a clearly delighted Bonnie Raitt left the stage at the end of a perfect night under the New York stars, by which I mean the light emanating from thousands of windows illuminating the towering apartments and office blocks surrounding the Lincoln Center.

Any questions, comments or suggestions? How about complaints or compliments? Let me know via the comments box below