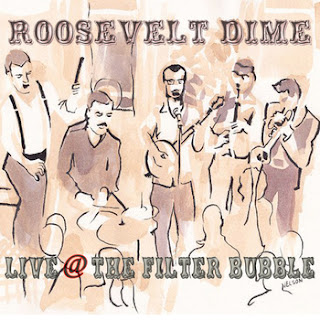 “In these troubled times, everyone needs a Roosevelt Dime”

One of the great things about travel is the chance to discover new music and exciting venues in the cities and countries you pass through. I don’t much go for hanging out in bars and clubs, but music venues, yes.

Friday 13, August 2010 turned out to be a lucky day for me. On that day I was wandering through Greenwich Village’s Washington Square Park during my New York City stay when my attention was caught by some of the happiest, liveliest music I had heard in more years than I care to recall. It seemed to be a mix of jazz, old timey music, folk, and that modern musical marketing segment known as Americana.

The group turned out to be Roosevelt Dime, an outfit I had never heard of, but which I immediately fell in love with and became a big fan of. They were in fact, indulging in some good old fashioned audience building. That is, they were out where the people were, playing for them live and for free. They were also promoting that evening’s gig at one of my favourite New York venues, The Bitter End.

Of course, I had to see catch their show. As it happens, I already had a ticket to see another one of my favourite American singer-songwriters, Steve Forbert, who was performing at Joe’s Pub on Lafayette Avenue that same night. However, as soon as that show finished I raced around to the Bitter End, and was delighted to find that Roosevelt Dime had only just taken to the stage.

The band is building its support base, one fan at a time. It is slow, hard work, but Roosevelt Dime seem to in it for the long haul, and know that there are no easy fixes on the road to bigger and more appreciative audiences.

If like me, you like what you hear, buy their music, and support their gigs – especially if you live in New York City and near abouts. Their website lists upcoming gigs in the New York area. Foot tapping fun for everyone is pretty much guaranteed.

"A perpetual crowd-pleaser, Roosevelt Dime often has commuters soulfully stomping their feet in the subway and passersby lindy-hopping in the park."
Tze Chun - The New York Times (June 7, 2010)
Posted by Jim Lesses at 6:10 PM No comments: