For the past couple of days I have been working on my New York City accounts and I can now report that my total trip expenses amount to $11,003.26. I was in the city for 87 days.

There is one important caveat to this figure, however. Due to the constant fluctuation in the exchange rates, this is not a completely true and accurate record of my expenses. The issue is that I went to New York City with around USD$3630 in cash, which I got on June 12, at whatever the exchange rate was on that day. Whenever I spent some of that cash during the following three months, I converted the figure into Australian dollars based on the exchange rate for that day before logging the expense.

Depending on whether the rate was heading up or down at the precise moment in time that I made the query, I might have been paying more than my original exchange rate or less. The only way to get completely accurate figures would have been to make my calculations using the same exchange rate I got in early June. Of course, I was not about to lose any sleep over this during my trip, and I am certainly not going to do so now. I’m happy to accept that my final expense numbers are very close to the mark, and even happier to put this baby to rest.

As readers will note, my expenses for this trip began in February, three months before my departure date. This was for a gig at City Winery with Dweezil Zappa, the son of the late, great Frank Zappa. I made this booking before I had even booked my flights! Speaking of which, I touched down at JFK international airport on June 16, and departed again from there on September 10 for a total of 87 days in the city.

For the record $11,000+ averages down to a daily spend at a fraction under $126.50 per day ($126.47 to be precise). This includes airfares, transport (taxis, ferries and trains), accommodation, food, entertainment, museum memberships, and other sundry expenses. Below you can see a breakdown by month of all the major categories I was accounting for.

A few extra comments about these expenses may be in order. For instance, my food costs were spread over three categories, the main two being Eats and Groceries, with Rec (Recreation), also accounting for some additional expenditure. Eats, were light meals and snacks I bought when out and about in the city. These were mostly of the ‘coffee to go’ variety, which often included a sandwich of some type. Groceries were mostly supermarket purchases used when I ate at the apartment. All my breakfast meals and numerous lunch and evening meals are accounted for under this heading.

Finally, any meal or drink purchased at a major event (such as gigs at City Winery, Highline Ballroom and such like), were included in my Recreation column. The main purpose of this column was to record expenses associated with fun! These included my MoMA and Metropolitan Museum memberships and visits to other museums, cinema outings, pre-booked gigs, and numerous other activities. Now that I think of it, book purchases ended up in this column as well. 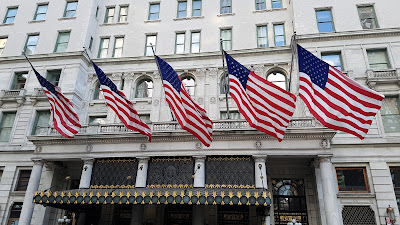 Eleven thousand dollars may seem like (and is) a lot of money, but spread across three months it constitutes a real bargain when one takes into account the high cost of living in New York City.

I consider myself extremely fortunate to have a contact living and working in New York who is very accommodating and was able to offer me the use of his Washington Heights apartment for just AUD$2400.00. This breaks down to $27.48 per day for each of the eighty-seven days I spent in the city. Heck, you can't even find a flop house in the city at that price anymore. So if you are reading this Chris, Thank You for giving me a chance to really immerse myself into the life and rhythm of this truly great city.
Posted by Jim Lesses at 4:37 PM 2 comments: 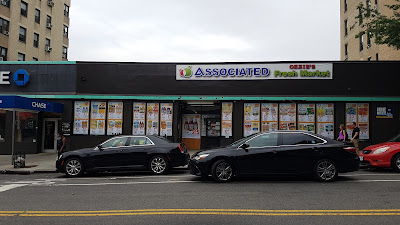 My local neighborhood supermarket.
Click images to view full sized.
...
Well, wouldn't you know it, a light rain is falling over the city as I write, and the temperature has once again dropped down into the very cool 70s. Not for the first time have I noticed that the temperature is always cooler in Washington Heights compared to that at Midtown, especially at night. Last night for example, when I left the AMC25 cinema, Midtown was its usual hot, steaming self, as were the subways of course. But when I left the 181st street station the temperature was at least 10-15 degrees cooler. I'm tempted to buy a thermometer just so I can check the temp above and below ground in various locations. A little bit of empirical data can go a long way.

By the time the rain had eased off and then stopped completely, it was well into the afternoon, and there didn't seem much point heading downtown, so another day inside seemed to be the order of the day. In the end, I did pop out to do some more grocery shopping, which accounts for my total expense for the day.

When I went out, I immediately saw numerous brightly colored notices taped to trees and other convenient places along West 187th Street, my neighborhood shopping strip. Hollywood is coming to Washington Heights, and tomorrow is the filming day. 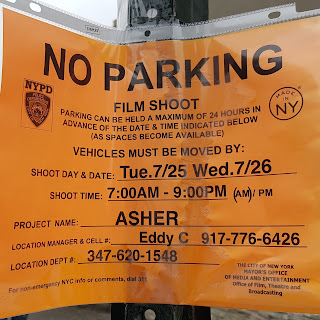 Hollywood comes to Washington Heights.
...
The Internet Movie Database has a listing for a thriller called Asher with a synopsis that reads: "When an ambitious college student infiltrates a militant religious cult for his thesis paper, he befriends a young devout member - who he comes to suspect is plotting a terrorist operation."

IMDb gives a release date of 2017, and only provides the names of four male actors, one of whom is Danny Glover, an actor that seems to have been missing from the silver screen since his peak years in the Lethal Weapon series of movies. No other information is provided but I'm wondering if this may be a series being made for Amazon. Time will tell. 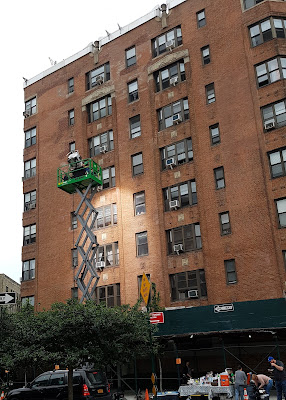 The lifting apparatus in the image above, is providing lighting for an indoor shot. Why this particular apartment in Washington Heights? How do decisions like this get made? Below are just some of the production trucks and units lining both sides of W 187th Street where filming was taking place. I would have liked to have hung around to catch more of the action, but I had places to go and things to do. 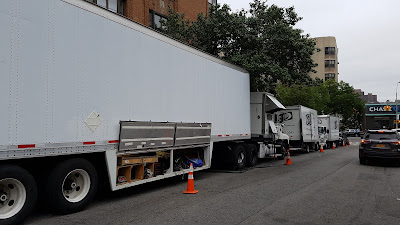 ...
I caught up with my cousin Steve for lunch, after which I headed down to the Apple Store at the Oculus to take another look at the new 10.5" iPad Pro.

I figured that buying the device using credit (which I would need to do), might seem okay, but if I can't pay the card off pretty much immediately -- and I can't -- then the interest for say, two months, along with the currency conversion fees I would be charged will pretty much eliminate any 'savings' I might have made. On the other hand, I will have had a new iPad to work with, and surely that is worth the extra expense. Isn't it? If the Aussie dollar continues to go higher, I will be very tempted to buy. I will keep an eye on the exchange rate over the next week before taking the final plunge.

A 256Gb model will cost me the equivalent of AUD$1,025.00 here, whereas in Adelaide it would cost me $1,129.00. The young man I was speaking to seemed uninterested in encouraging my purchase, so I said I'd go have a coffee and think about it, and think about it I did. And decided not to buy at this point. I went to Brookfield Place for coffee, and then decided it was time to pay a visit to New Jersey. 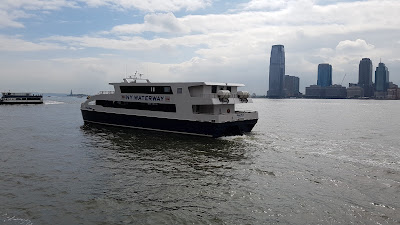 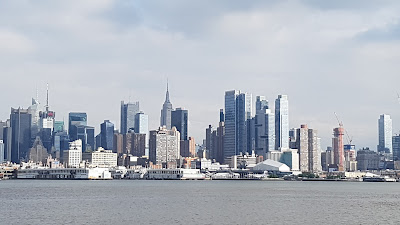 Above and below: The views of the Manhattan skyline are quite spectacular from the New Jersey side of the Hudson River. Also below, pier supports for one of several long gone shipping jetties still visible on this side of the river. 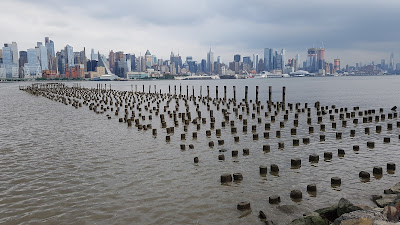 ...
I went looking for the longest ferry trip I could find but due to my ignorance, didn't quite make the right choice from the numerous ferry routes available. So instead of going to Edgewater, NJ, which is opposite 138th Street on the Manhattan side of the Hudson. I ended up going to the Port Imperial ferry stop (roughly opposite West 54th St.). Having disembarked there I decided to explore further. Sadly, the main road was bereft of interest, so I walked along the river front for just over a mile to the Guttenberg/North Bergen Waterfront Park at North Bergen. 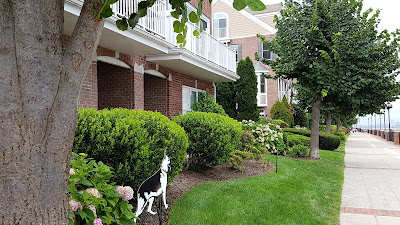 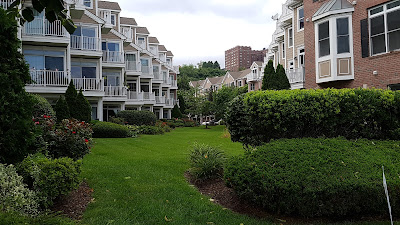 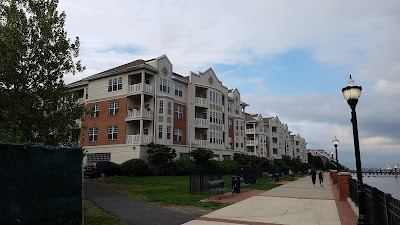 ...
The walk along the river passes block after block of very fine looking apartment complexes, and I have to say I was very impressed with what I saw. The apartments facing the Hudson River (seen above), have great views of the Manhattan skyline, and the new developments are surrounded by lush flowerbeds, beautiful trees and shrubs, large areas of lawn, water features, and at least one development had its own swimming pool. I had to admit the location was perfect, except for one major problem - the awful stench of sewage that wafted over the neighborhood.

The foul odor could be noticed all along the section of walk I undertook, and I thought if this smell is here all year round, that would be a real bummer (no pun intended). There had to be an answer to the stink somewhere, and of course. Dr. Google provided it. A search for 'sewage works near Port Imperial' turned up not one but two sewage plants both within about half a mile of each other, and Google Maps provided the evidence.

In the image below at bottom left on Port Imperial Blvd (look for three circles that look like pearls), is one facility which seems to be nameless. At top right of the image you will find another three smaller pearl colored circles where the Woodcliff Treatment Plant is located at 7117, River Road, North Bergen, New Jersey. No wonder the air reeks with foul odors. And it was just my luck to have chosen the smelliest part of this lovely section of the New Jersey shoreline to take my walk! Some luck. I can only hope that these two facilities, and others like them are not pumping effluent (even treated effluent) into the Hudson River. 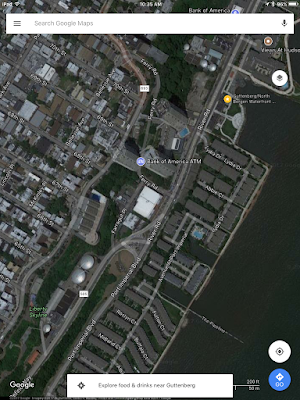 Above, a Google Maps screen shot of the offending facilities polluting the air along this section of the Hudson River. As for looking for places to eat - no thanks!
...
After a short rest at North Bergen, I walked back to the Port Imperial stop and caught what I thought would be the ferry back to the World Trade Center stop near Brookfield Place. Instead the ferry bypassed that stop and continued around to the ferry terminal at the South Street Seaport, which was a nice bonus.

This area seems to have become a very popular over the past couple of years, with new fashion outlets, restaurants, and cafes springing up close to the waterfront. There is much new development still taking place in the proximity of the old Fulton Fish Market and I expect within another year or two this area will have been transformed into a very hip part of Lower Manhattan.

I found somewhere to eat in the area, then headed back to the apartment. And that dear reader is how I spent my 40th day in New York City. 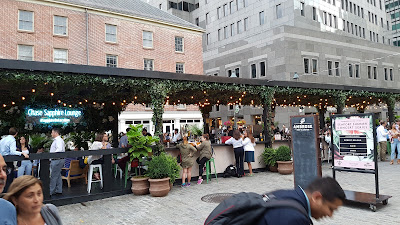 The South Street Seaport is going off! 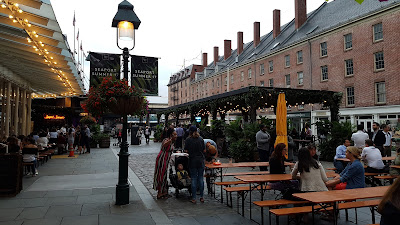 Any questions, comments or suggestions? How about complaints or compliments? Let me know via the comments box below.
Posted by Jim Lesses at 4:54 PM 2 comments: