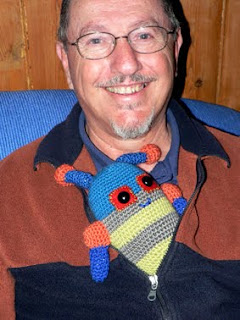 Meet my travelling companion, Livingstone, named in honour of the Scottish missionary and explorer David Livingstone. Livingstone was created by my niece, Sarah-Jane Cook, a much underrated visual artist who works across many mediums. Since I generally travel on my own, we both thought (that is, Sarah-Jane and I), that it would be good if I had a travel buddy with me on my round the world trip, which begins in less than 24 hours. So, out of all the creatures and characters Sarah-Jane has created, I have selected Livingstone as my boon companion.

Livingstone is already well travelled, having recently come from a tiny planet in the region of a star cluster with the incredibly romantic name of NGC 6752. Seriously! Livingstone was very straight faced and quite sober when he told me this. Apparently, NGC 6752 is somewhere out beyond the Pavo constellation. Unfortunately, he did get caught up in some recent sun spot activity which seems to have caused a major malfunction in his internal guidance mechanisms. The other side effect of this incident is that it has left him with a body mass that has become extremely soft and pliable, giving him the appearance of a soft toy made from heavy ply wool with black beads for eyes – but as Livingstone says, appearances can be deceptive.

In and of itself, his transformation from an inter-galactic, state of the art, robotic alien is not a major drawback, since it means he is now incredibly light and can fit into almost any space, which in turn means I should have no trouble toting him around with me wherever I go.

Assuming I don’t get turned back at Los Angeles International Airport by an overzealous Border and Customs Control officer who thinks it is very strange that a 61 year old should be travelling around the world with a ‘soft toy’ called Livingstone, I look forward to sharing many exciting adventures with you - and of course, with Livingstone.