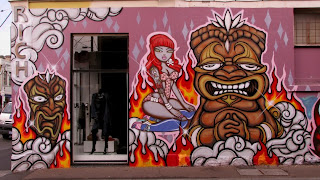 I’ve kicked off the shackles of illness and hit the streets of town with a vengeance and a good pair of walking boots.

I set off at for a walk from Fitzroy North into the city centre – a pretty easy and doable distance of around 6 kilometres (3.7 miles). The object of the exercise (no pun intended) was to walk, explore, enjoy the sights, take a few photographs, eat, drink and make the most of a perfect, cool, clear sky Melbourne day.

You can see a complete route of today's walk here. I should however, point out that the route as displayed between the 4km and 10km markers looks like the ramblings of a drunken man – and I can assure you I was not staggering around the streets of Melbourne in an inebriated state. I can only assume that Walkmeter, the iPhone app I was using to map my route, had trouble getting good GPS coordinates due to the many high-rise buildings around the city centre. And it probably didn’t help that I kept disappearing into one building after another to explore some point of interest along the way. 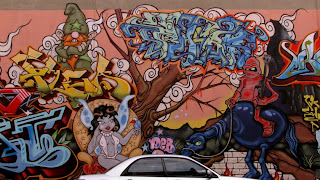 In the end I also walked home again, completing a good afternoon of exploration of around 13.5kms (8.3 miles), that took in Brunswick Street, Federation Square, ACMI, the Arts Centre, Lygon Street and more besides.

My overall impression of remains much the same as it was after my visit earlier this year. That is, there seems to be a pervasive sense of forward movement, continued growth and excitement about the place. Unfortunately, these sentiments can’t be said about my home town, . But don’t get me started on that theme!

’s alleyways are renowned for the quality of the graffiti that covers their walls, but the alleyways are not the only place you will find great graffiti. Yes, I know “great graffiti” sounds like an oxymoron, but let’s be honest, there are artists and practitioners of graffiti who do have real skills and creative ideas that rise above mere spraying of tags everywhere. Which is why I’ve decided to illustrate this post with some examples of the graffiti I discovered during my walk today. 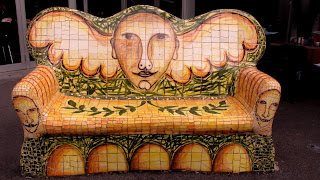 This wonderful mosaic bench was one of three I saw at various locations along . This is a good example of the types of public art you can see all over the centre of , and the inner suburbs. In this respect, reminded me of , which also makes a point of placing public art all over the five boroughs that make up greater .

Melbourne even produces a public art walking map which guides you around a collection of some of the best examples of the city's public art works, and another brochure detailing the graffiti covered alleyways that have helped to make the Victorian capital so iconic and well known internationally.

There is much yet to discover in Melbourne, and I will barely scratch the surface over the next three weeks, but you have to start somewhere, and this has been my beginning.

Tip: Click on each image to view at full size