(Or, Do You Want Mouth Wash With That?) 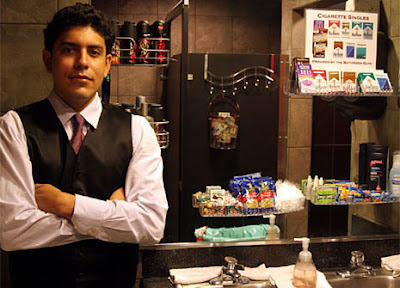 Reading through my travel journal the other day, I noticed an entry about a profession that I thought had died out and disappeared along with hole-in-the-floor toilets – at least those that may have once been found in New York City. That profession (if it can rightly be called that), is the Bathroom Attendant.

Let’s be clear about what we are discussing here. Bathroom attendants (as opposed to workers who clean bathrooms periodically through the day), are employed to stay inside restrooms throughout their shift where at a minimum they dispense towels (paper or cloth), liquid soap, and a spray of perfume, hairspray or hair gel. The more elaborately stocked service centre’s might also provide perfume/cologne, mouthwash, chewing gum, cigarettes, deodorant, prophylactics, aspirin and much more besides.

I am well aware that bathroom attendants still exist in some European countries and elsewhere (Turkey, Morocco, Egypt…), but I certainly didn’t expect to stumble upon them in New York, where I first encountered bathroom attendants while visiting the Apollo Theater in Harlem – or should that be while visiting the men’s restroom at the Apollo Theater. I ran into another one at B.B. Kings Bar & Grill, while attending an Iris DeMent gig there.

In my journal I wrote: Like the Apollo Theater, B.B. Kings Bar & Grill staff their bathrooms with a person whose job it is to hand you paper towels and hand cleansers after you use their restroom facilities. Of course, once they have seen to your needs, you must tip them a dollar or two to show your appreciation.

I also asked myself rhetorically: How far back does this archaic ‘service’ go? And is it still needed in the 21st century?

How far back this position goes, seems to be lost in time. However, a quick online search reveals that the bathroom attendant as a modern institution is still alive and well – even in – which presumably means the service is still needed today. Attendants are generally found in large music venues and other well attended locations such as up-market restaurants, casinos, night clubs and bars, sports stadiums, theaters and such like.

I found a couple of job descriptions online for potential attendants seeking a career in this area. One reads: Restroom Attendant (Cleaning): Makes sure that the restrooms are clean and neat and stocked with towels and toilet paper. Includes the following duties: wipes down sinks, cleans mirrors, mops floors, and cleans toilets. Will need to work with chemical cleaning agents.

Initially, my reaction on encountering the attendants was one of surprise and discomfort. I don’t know of any Australian venue or location that employs bathroom attendants in its restrooms, and I was unsure of the ‘rules of engagement’ on seeing the two gentlemen at the Apollo Theater and B.B. Kings. 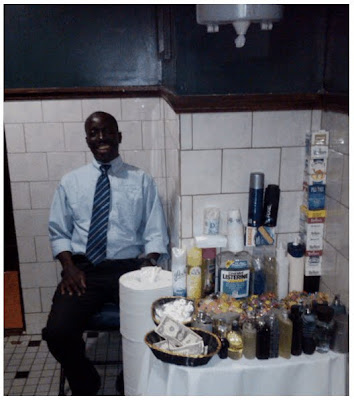 Image: A cheerful bathroom attendant with his tools of trade

Unlike the cheerful fellow seen above, the elderly African-American attendant at the Apollo Theatre looked completely and utterly uninterested in his work, and basically sat, slouched in his chair accepting tips. The Hispanic gentleman at B.B. Kings was much younger, and was at least making an effort to assist his ‘clients’. I noticed that the female restroom at B.B. Kings had a female attendant (also Hispanic), and can only assume the female restrooms at the Apollo are staffed as well.

I mention ethnicity deliberately, since my research (brief as it has been) indicates that this is a job that rarely attracts white, Anglo-Saxon Protestants – to coin an old phrase. Despite the suits and ties on display in the two photographs above (found after an internet search), this is hardly a job for the upwardly mobile.

Bathroom attendants will almost certainly be on minimum wage, if that, since some of my research even suggested they may live entirely off tips!

An article in the New York Times of (which referred to attendants as “valets”, presented a tale of exploitation, and numerous violations of American federal and state laws. To quote the article: The restroom valets who stand hour after hour in 's restaurant bathrooms come from varied backgrounds. Many come from and , but many are also native-born Americans. In booming restaurants, they can make more than $100 in tips on a good day, but on slow days they often earn less than $10.

A ‘miss lynnster’ corroborates this in a comment she attached to a blog post on the topic: When I worked in the LA House of Blues in 1994 or so, some of my favorite fellow employees in the club were actually the bathroom attendants. They … used to tell me that they only worked on tips, which I still have a hard time believing... but I don't know. I don't know that I'd stand there in a bathroom all night just for tips.

To add insult to injury, attendants have to supply their own stock (perfume/cologne, mouthwash, chewing gum, cigarettes, etc). Presumably they are able to mark items up to turn a small additional profit on this stock, but it hardly constitutes a road to riches.

through the comments posted on numerous web blogs dealing with this topic, many readers find the presence of attendants irritating and think them unnecessary. A couple of typical responses: …I don't think bathrooms need attendants. I think most people are fully capable of operating the various functional areas of a public bathroom without the help of a third-party dude.

And: It really irritates me when establishments have bathroom attendants - they're completely unnecessary, and when I'm already paying rather a lot of money to eat and drink, it seems in poor taste that I would be expected to contribute more.

On the other hand, many readers pointed out good reasons for having attendants in restrooms: the added sense of security; cleaner, more hygienic restrooms; cubicles stocked with toilet paper and hand towels, etc. As one person wrote: I used to think that it was ridiculous to have them there … but go to a restroom at a busy club without one and wade through the piss and paper towels and you'll realize why they're there.

Another writes: These people need to eat too. Give em a break. How would you like to stand in a pisser all day and have to hand out towels to people in that setting. Many of these people are not going to be corporate executives any day soon. Don't be cheap.

I’ll leave the final comment to ‘Tom’, who wrote: I'm disabled and make my living as a self-employed bathroom attendant. I take great pride in my work by the way. Besides keeping each stall and such spotless, I…offer things like combs, small colognes, condoms and other small items for a modest price. …I only expect a tip since its my only source of pay. Its honest work I'm not on welfare or taking handouts, I provide a service and try to do it well. Then people look down on my profession, what am I doing wrong?

In the end, I remember tipping the Apollo Theater attendant a dollar, but to my shame (having learned a lot more about attendants/valets while researching this entry), I gave nothing to the attendant at B.B. Kings Bar & Grill. An oversight I will make up for if I ever visit the restroom there on a future trip.

Still, it appears those creative Japanese may have a solution to this whole issue. They are developing robotic hi-tech toilet attendants that are designed to clean up lavatories in highway rest areas. Apparently these cleaners (seen in the image below) will also be programmed to have simple conversations. 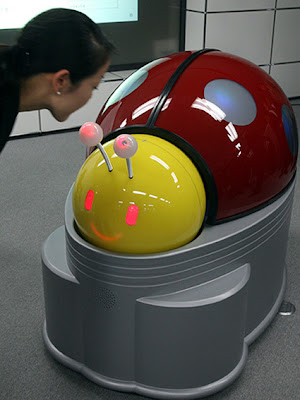 The Ladybug bathroom attendant uses a combination of voice recognition software, speech synthesizer programs and of course microphones in its antennae to engage in conversation with restroom users. Aside from offering conversation, Ladybug is equipped with water storage units, scrub brushes and other tools needed for keeping the restroom in tip top shape. You can have a clean bathroom and great conversation for a mere $30,000 when this robot hits Japanese markets.