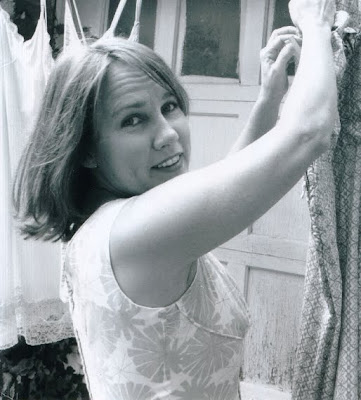 ~ One of things I made sure I did when planning this trip to New York was look for concerts that might coincide with my stay. To my delight, I’ve managed to see three of my favourite performers while I’ve been here: Steve Forbert, Pete Seeger (see Pete Seeger - Living Legend), and Iris DeMent.

I can't remember where or when I first heard the voice of the American singer songwriter, Iris DeMent, but when I did, I was immediately captivated by the high plaintive sound of her voice. You see, I have a 'thing' about singers with high plaintive voices. Antony Hegarty (Antony and The Johnsons), Salif Keita, and several others have a way of piercing my psyche with their voices and music that I can't rationally explain.

Iris DeMent is one such singer. Iris (the youngest of 14 children), grew up singing gospel songs at home and at the Pentecostal church her family attended . She didn't start writing and performing her own songs until she was 25, and released her first recording in her early 30s.

Today, she is generally categorized as a country singer, but her songs and stories transcend that label. Her song writing covers a wide range of topics including sexual abuse (Letter to Mom), Vietnam (There's a Wall in Washington), contemporary US politics (Wasteland of The Free), her family (numerous songs), and much more. Always honest, thoughtful and filled with insight, her songs are built around great melodies delivered in her trademark 'high lonesome' voice.

This was my second Iris DeMent concert. My first coincided with my New York visit in 2008. To see Iris on that trip I had to travel upstate to Lake Placid where she was performing at the local arts center. I must admit I was a little disappointed with that concert. Maybe it was the venue or the quality of the sound system. Maybe it was because I was too far back from the stage. Or maybe my excitement at seeing Iris for the first time raised my expectations for the performance to a point where Iris couldn’t possible meet them.

Thankfully, there were no such problems with the venue, Iris, or my own expectations at the B.B.King Blues Club & Grill last night where Iris was in fine form, and took time to introduce her songs and tell the stories behind many of them. Her songs are rooted in her past, in the daily life she lives today on the farm she shares with her husband and children in rural Iowa, and they are especially entrenched in her strong religious faith.

Her singing voice is filled with emotion, and every time I hear her sing I find myself deeply moved by that emotion and the feelings she evokes. I’m sure that more than one person was literally moved to tears during the 90 minute performance last night, and that is a rare and precious thing in today’s contemporary music scene.

Take another look at the photo above, and check out the other photographs on her website. She may appear somewhat plain and ordinary, but Iris is not selling youth or false images of beauty. Iris DeMent is the real deal. Her songs and her voice have the ability to move me in ways that most contemporary performers will never do. There are some full sound files on her website you can listen to, but personally, I recommend you just go out and buy (or order online) any -- or all -- of her four albums.

Happily there are numerous video clips of Iris DeMent on YouTube. Some feature her performing solo, but many show her singing with a host of other singer songwriters including James Taylor, Emmylou Harris, Nanci Griffith and John Prine. Here she is performing probably her best known song, Our Town on an unnamed television show. Hopefully, the uninitiated will get a sense of Iris DeMent's beautiful voice and fine songwriting style. Enjoy...


By the way, you may find you already have Iris DeMent in your record collection since she has appeared as a guest on many albums by some of the best contemporary singer songwriters recording today, including Tom Russell and the afore mentioned Emmylou Harris, Nanci Griffith, and again John Prine. Here she is sharing the stage with John Prine performing In Spite of Ourselves…

A special shout out to Pat and Neil who shared a table with me throughout the evening. It was lovely to be able to chat before the show over our meals and share something about ourselves and what it was that brought us together at an Iris DeMent concert in New York City. Cheers.
Posted by Jim Lesses at 2:50 AM