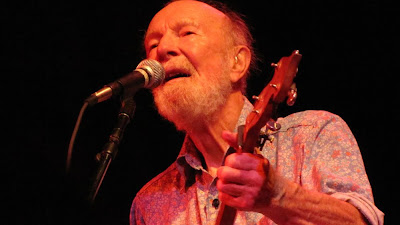 Image: Pete Seeger on stage at the Bearsville Theater, August 2010

R.I.P. PETE SEEGER 1919-2014
ADDENDUM: February 2014. As you can see by the date attached to this post, it was originally written in August 2010, after I had seen Pete Seeger in concert for the first and only time in my life.

Singer, songwriter, environmentalist, ecologist, humanist and socialist; husband, father, grandfather and great grandfather, Pete Seeger was all these and much more. When Pete Seeger passed away on Monday, January 28, 2014, it is not overstating the praise to say that the world lost one of its great champions and humanitarians. It was a great honor to see him in concert, and the greatest praise his many admirers can extend to Pete is to honor his memory by continuing to sing his songs, and to get involved in the many causes and issues that were close to Pete's heart. Much remains to be done.

I have set myself an impossible task – to capture the essence of a living legend. Not just that, but do it in a few hundred words. And rest assured, even if you have never heard of him, Pete Seeger is a living legend. He has been at the forefront of folk music – the people’s music – in America for over 70 years. Even at 91 years young, he continues to compose, perform, inspire, teach, and write. He has been a life-long activist and champion of the poor and oppressed; campaigner for the environment and world peace; defender of civil liberties and passionate advocate for human rights.

As a member of The Weavers, probably the first folk group ever to make it into the Top 40 charts, Seeger has tasted great success, but also knows exactly what it is like to fall from grace after being forced to appear before Senator Eugene McCarthy’s anti-communist House Un-American Activities Committee, during the 1950s. His appearance there and the accusations he faced, lead to him being blacklisted from television shows and concert halls right across the United States.

But Pete Seeger weathered that storm, just as he has many others. He has sung in venues large and small from America to Australia, and a hundred countries in between. His music and recording career has been lauded and honored by everyone from Bob Dylan to Bruce Springsteen. In fact, Springsteen released his own tribute to Seeger when he recorded We Shall Overcome: The Seeger Sessions in 2006. And of course, Bruce Springsteen joined Pete Seeger on stage at the inauguration of President Barack Obama in January 2008 to sing Woody Guthrie’s This Land Is Your Land. Here they are performing that song…
...

...
I first became aware of Pete Seeger and his music during the late 1950s via my older brother, Nick, who had some of the first Weavers albums. Unfortunately, I didn’t travel to Melbourne in 1966 to see Pete Seeger during what was I believe, his first and only visit to Australia, so I’ve had to wait over 40 years to attend my first performance by this icon of the folk music scene. This I did 0n Sunday, August 8th, at the Bearsville Theater*, just out of Woodstock, New York.

After a couple of preliminary songs from Princess Wow and Roland, a local couple intent on changing the world with their Smile Revolution, Seeger took to the stage.

Having taken to the stage, and before singing or playing anything, Seeger surprised us all by introducing two of his favourite banjo players, Eric Weissberg and Bill Keith. Eric Weissberg has secured his place in musical (and cinema) history as the composer of Dueling Banjos, the theme from the movie Deliverance. Bill Keith has spent a lifetime playing bluegrass music and has made significant contributions to the development of the instrument. Both men are now in their early 70s, and I believe both reside in Woodstock, or near-abouts. 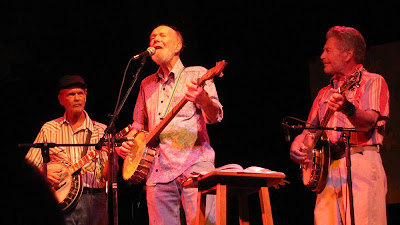 
As you might expect, at 91, Seeger’s best concert years are well behind him. His singing voice has virtually gone. The beautiful high vocal style that has featured on so many albums has been reduced to a battle-scarred rasp. His fingers, having plucked, strummed and picked millions of notes faultlessly for 70 years, now trip and stumble over much loved songs and tunes. His memory too, occasionally lets him down. And yet, those of us in the audience of the packed Bearsville Theater were not there to see a man at the top of his game, or to take pity on a legend who may be past his prime. We were there to honor the man for his commitment to a lifetime of music and activism – a commitment that continues to this day – and we were there to acknowledge his history, his humanity, and to say Thank you for the many years of joy and pleasure he has given us.

Of course, as always, audience participation is a hallmark of any Seeger concert. Pete has always been a great leader of songs, and early in his career he perfected the art of teaching songs to audiences even as he sang them. Now that his voice is failing him, this aspect of any Seeger appearance has assumed even more importance than it may have once had. In effect, we have to sing the songs for him. Not that I or anyone else was complaining. It was enough that we were in the same room with him, sharing the same space. 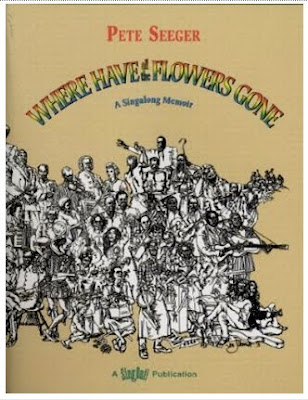 Image: Pete Seeger’s revised and updated book, Where Have All The Flowers Gone?

One of the booking options I took advantage of when reserving my seat was to also purchase a signed copy of Seeger’s revised and updated publication, Where Have All The Flowers Gone?

First released in 1993, Pete calls it a ‘singalong memoir’, and armed with a copy of his own book, he began working his way through the opening chapters as an aide memoir for himself.

He started with a story from 1939 when he was trying to find work with a newspaper. An aunt, who was a teacher asked him to sing to her class, for which he would be paid $5. “I took the money,” he said, “and stopped looking for an honest job, and I’ve been singing ever since.”

And weren’t we glad that he did?

He talked about the war years, and the group that was a precursor to The Weavers – The Almanac Singers, a group that included Woody Guthrie. He described Woody’s writing of the song (The Sinking of The) Rueben James, and how it originally had “10 or 15 verses,” mentioning by name all the seamen who drowned when the ship was sunk. The rest of the Almanac Singers complained that no-one but Guthrie could remember all the verses, and urged him to cut the song back and to add a chorus. Guthrie obliged by cutting the song back to five verses, and writing a great chorus for a song which is still sung today.

And thus with more songs and stories the performance proceeded into the afternoon.

On my way to Bearsville, I told myself I would be satisfied with 30 minutes in Pete Seeger’s presence. Seeing him on stage for an hour was more than I could expect. In the end, Pete entertained us with stories and songs for almost 90 minutes. More than I (or anyone else), could possible hope for. Personally, I consider myself blessed and privileged to have had this rare opportunity to see a genuine living legend during this visit to America.

As Eric Weissberg – who has known Pete for over 50 years – said at the end of this rare concert length appearance by Seeger, “How lucky are we to be on the planet at the same time as Pete Seeger?”

Following the performance, Seeger was immediately whisked away from Bearsville by his family and/or carers. I had hoped to meet him (however briefly) to personally thank him for enriching my life with his songs and stories; his many recordings, and for his numerous books and music publications. I never got that chance then, so I’m going to do it now.

Pete Seeger, Thank you for the joy your music has given me these past 50 years. Thank you for your boundless humanity; your optimism; your humility, and for the ongoing examples you continue to set as performer, songwriter, mentor, and advocate for peace and justice. For all this and so much more, I thank you.
Pete Seeger Online:Pete Seeger’s official website, Pete Seeger Music…

Pete Seeger on YouTube: A search for “Pete Seeger” on YouTube seems to indicate there are several thousand videos of Pete available for you to watch and search through.

SingOut! Magazine: Ever since its inception, Pete has been associated with the American folk song magazine, SingOut!. You can find it at most Borders stores, or order a downloadable copy from the SingOut! website. 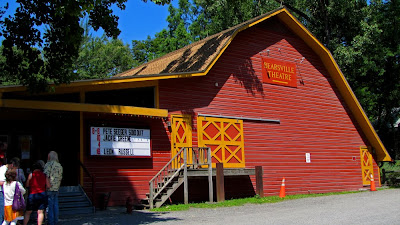 * As an interesting postscript to this entry, it is worth remembering that the Bearsville Theater was built by Bob Dylan’s first manager, Albert Grossman. In fact, Al Grossman is buried somewhere in the grounds surrounding the theater, although a quick look around the site did not reveal a headstone or anything marking an obvious resting place for this titan of the 1960s folk music scene.
Posted by Jim Lesses at 1:16 AM