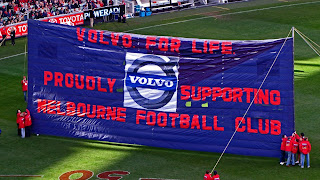 Yesterday, I attended my first Australian Football League (AFL) game at one of ’s iconic sporting venues, the Melbourne Cricket Ground, otherwise known as the MCG, or to real sporting aficionado’s simply as the ‘G’.

Now you have to understand there is a world of difference between Aussie rules football, or footy, as we like to call it, and the British version of football (which we call soccer), and what the Americans call football, but this is neither the time or place to try and explain those differences. Except to say that Aussie rules football is high scoring, fast (and sometime furious), full of high marks and aggressive tackles, and played by teams whose supporters are practically born into their favourite teams, just like previous generations of family members. 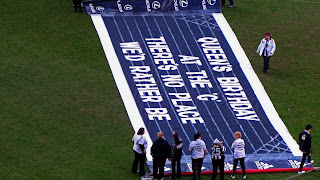 Facing off for a classic round of Aussie rules footy where arch rivals Melbourne and Collingwood. Personally, I would have been happier attending a match between my two hometown teams, the Adelaide Crows and Port Power, but unless they miraculously play off against each other in an AFL Grand Final (dreams are made of this), I can only see them compete against each other in .

However, Melbourne is where this sport was born, where the biggest teams come from, and where the most passionate fans are located, so it was interesting to attend a game between two Victorian teams with a long history of competition between them. It was also interesting to be part of a crowd of 67,454 football fans who are not afraid to give voice to their anger, frustration, and gratuitous advice, with which they liberally shower their team and coaches (and the opposition team and coaches with).

I don’t know how many tourists or travelers make a point of attending major sporting events in the cities they visit, but I think you can learn a lot about a country and its people by doing so. I suspect Australian football fans are no different from British, American or any other national sporting fans you care to name. We are passionate, vocal, rude, outrageous, and make no excuses for being so.

Along with the previously mentioned abuse hurled at both teams, the greatest vitriol is reserved for the hapless umpires who seemingly can’t do a thing right, or make a correct decision – especially when it is your team which is on the end of a controversial ruling. It is at this point that all semblance of decorum and manners fly out the window (or more to the point, fly out of the mouths of adults who should know better). I don’t know if sporting fans are the same all around the world, but Australian sporting fans don’t hold back when they disagree with an umpire or referees decision. Anything goes, and if you are the type of person who is offended by profanity of the worst sort, you wouldn’t want to attend an Aussie rules football game.

I fully intend to undertake my own research on the behaviour of sporting fans during my summer trip to New York City, where I plan to attend a couple of baseball games and roller derby events, and any other major sporting event I happen across. I’ll let you know the results of my ‘research’ down the track.

If you are wondering how the scores are arrived at, teams score by kicking goals or points. A goal is worth 6 points, and a point is counted as 1. Since kicked 11 goals and 10 points the equation looks like this (6x11=66+10=76). For Collingwood it is (9x6=54+22=76). The team with the most points at the end of the game is declared the winner, and gets the four points allocated to the winning team which determines its place in the competition. Since the game was a draw, each team gets 2 points, and moves up or down the competition ‘ladder’ depending on how other teams in the competition performed over the weekend.

Whew, that’s more information than you probably needed to know, but there it is!