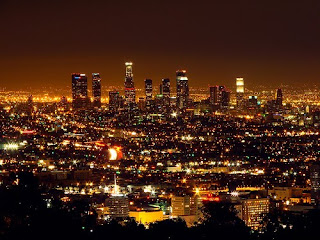 International travel can be quite confusing to the uninitiated. Last night, Tuesday, I uploaded a blog post from . And now here I am a day later posting another update from – and it is still Tuesday night! No wonder international flights leave passengers jet lagged, short tempered, and struggling to adjust to constantly changing time zones.

At local time, flight NZ2 touched down at , otherwise known as LAX. It was the end of another uneventful flight spanning 10,590 kilometres, and eleven long hours from . All up I’ve spent at least 18 hours travelling (I’m too tired to work out the exact number). Right now as I sit in my Super 8 budget hotel room at LAX, I am delighted I made the decision not to fly through to New York, thereby saving another 6-8 hours of flying time, and the additional problem of trying to work out what to do after arriving at New York City’s JFK airport at one in the morning. I certainly had no intention of banging on the door of my host’s apartment at or thereabouts asking to be let in.

Never the less, my stopover in , is going to be short, sharp and shiny. Essentially, I’m here to let my body adjust to the change in time zones, so that when I reach I will be ready to hit the streets as soon as possible. However, that doesn’t mean I’m going to spend a day and a half sleeping or sitting around watching cable television. Tomorrow I will go on one of those horrible all-in-one bus tours that cover most of the popular attractions around , if only to get a quick overview of the city.

My in-flight movie of choice this time was The Girl With the Dragon Tattoo, a film based on the best selling book of the same name by Stieg Larsson. Several members of my family have been urging me to see the film, so as soon as I spotted it on the list of in-flight movies, I knew I had to watch it. I must say though, it was very disconcerting to be watching this film while sitting next to two young women. The film features several explicit sex scenes (even after being modified for air travel), graphic violence, lot’s of images of dead female murder victims, and other violent scenes. I don’t know if anyone else was watching the film over my shoulder, but I certainly felt conspicuous and even self-conscious at various points during the movie. Having said that – it is a very good film, and I’m glad I finally got to see it. Even if it was edited for our in-flight entertainment.

Getting through security at LAX was slow but without incident. After having my fingerprints taken and my face photographed for posterity, I was out on the street looking for my courtesy bus ride to the motel, which duly came and presented me with my first problem – no money for tips. It’s not as if the driver of the bus had to do very much. After all, I am quite capable of humping my own backpack and small case, but of course he wanted to show how efficient and accommodating he could be. So he loaded and unloaded them for me, and clearly expected a tip, which I just as clearly ignored, since I didn’t have any money handy to give him.

If the same driver gives me a ride back to the terminal on Thursday morning, I will make sure he gets an extra bonus for his efforts.

I must say, my energy levels are flagging fast at the moment, so I’m signing off. Time for a long hot shower, and meal at the Greek restaurant just around the corner. Later, gator…