NYC Day 56: In Which I Go To Hoboken In Search of The Ghost of Frank Sinatra 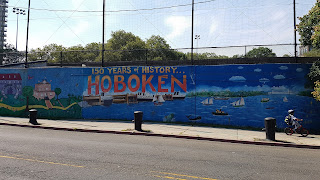 Click on images to view full sized
...
Today was one of those days that started out as one thing, and ended up as something else completely. I had the vague idea of indulging in a long ferry ride to ... where exactly? As it happens, I had not worked that bit out. Nevertheless, I made my way to Fulton Street with a rough plan to catch a ferry from the World Trade Center ferry berth, and see what was on offer. In the end I decided on a short ride to Hoboken South.

The last time I visited Hoboken was in 2010, and it is pleasing to see that New Jersey has found some money to smarten up areas along the Hudson River. A heap of new developments have sprung up over the intervening seven years, including multi-storey apartment complexes, along with extensive beautification measures that make walks or bike rides along well maintained paved pathways a real pleasure. 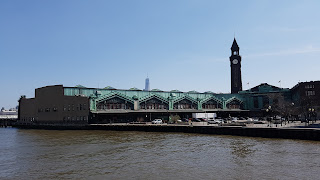 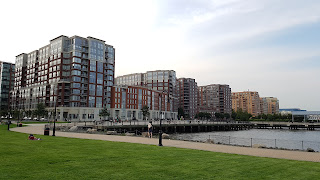 ....
I was surprised to read via Wikipedia that "Hoboken was originally an island, surrounded by the Hudson River on the east and tidal lands at the foot of the New Jersey Palisades on the west." Though after some thought, I remembered that Coney Island, that most famous of New York City neighborhoods, was also once an island until what little stretch of water separated it from the mainland was filled in, paved over, and built upon.

I was even more surprised to read that despite being in New Jersey, "Hoboken is part of the New York metropolitan area." The Wiki articles goes on to say, "The city is a bedroom community of New York City, where most of its employed residents work." Indeed, "about 53 percent of the employed residents of Hoboken...work in one of the five boroughs of New York City, as opposed to about 15 percent within Hoboken."

But, wait! There's more. "The first officially recorded game of baseball took place in Hoboken in 1846 between the Knickerbocker Club, and New York Nine at Elysian Fields." A historical marker stands at the intersection of 11th and Washington Streets, the former site of Elysian Fields. 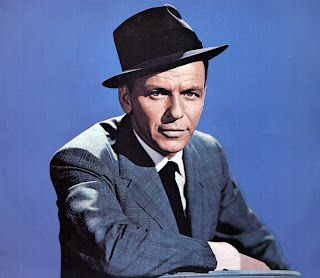 Ole Blue Eyes himself.
...
Hoboken likes to lay claim to one of America's most famous and popular singers and actors, the one, the only... Mr. Francis Albert Sinatra. I know this because they have named Frank Sinatra Park in his honor. Heck the city has even named Frank Sinatra Drive after him.

Sinatra was born December 12, 1915, in an upstairs tenement at 415 Monroe Street in Hoboken, New Jersey.

If I had thought ahead far enough, I could have walked to this address from the Hoboken South ferry berth to look for the house myself, but since I was not that organized, I have resorted to a Google Maps Street View of the address, and from what I can see, it seems to me that the tenement building that once stood here has long been pulled down and the site is now a car park for what appears to be a bar at number 417 called...wait for it... From Here To Eternity. Of course all Frank Sinatra aficionados will know this is the name of the 1953 film he starred in along with Montgomery Clift and Burt Lancaster.

A parking lot! It must be time to play Joni Mitchell's song, Big Yellow Taxi, with its very appropriate opening verse: 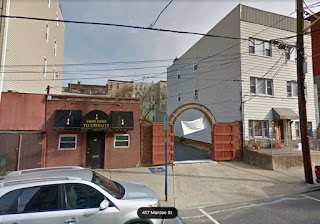 Oh well, at least someone had the bright idea of placing a star on the sidewalk to memorialize the location. 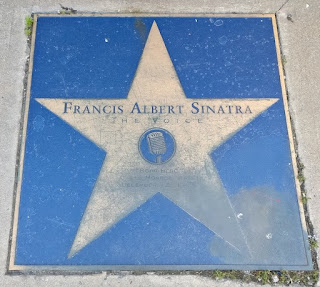 To be frank (sorry, that was an appallingly bad pun, I know), but apart from the Frank Sinatra Park and Drive, there really was not a lot to see in Hoboken for anyone wanting to walk in the man's footsteps. There was nothing for it therefore but to take a slow stroll along the Hudson River Waterfront Walkway, as far as 14th Street where another ferry berth was located. Along the way I stopped to enjoy the river views, and check out some of the local history.

Frank Sinatra Park
This park, near Pier A, is a great location to take in late afternoon or early evening views of the Manhattan skyline, especially when the rays of the sun begin to bathe buildings in a soft golden light. The park was built in 1998 and is shaped in a Roman amphitheater style with an area that faces the former site of the World Trade Center. The Hoboken Division of Cultural Affairs regularly produces events at the park which includes Thursday concerts, and 'Shakespeare Mondays' which are presented by the Hudson Shakespeare Company. 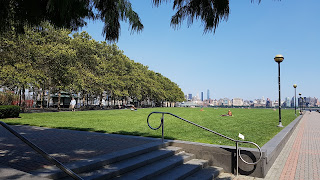 Above: the beautiful Pier A park, and below, the children's playground at Pier C. 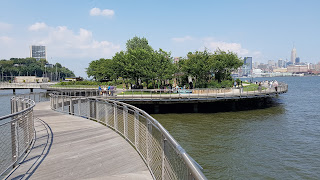 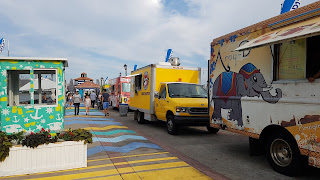 Sybil's Cave
Sybil's Cave, named for the ancient Greco-Roman prophetess, once "a cave with a natural spring, was opened in 1832 and visitors came to pay a penny for a glass of water from the cave which was said to have medicinal powers. In 1841, the cave became a legend, when Edgar Allan Poe wrote The Mystery of Marie Roget, about an event that took place there. The cave was closed in the late 1880s after the water was found to be contaminated, and it was shut in the 1930s and filled with concrete, before it was reopened in 2008." [Wikipedia...] However, the entrance to the cave is once again permanently barred by a heavy iron grill that completely encloses the opening, making it inaccessible to the public. 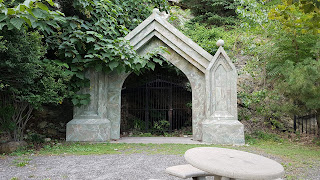 Above: The entrance to Sybil's Cave, and below, the cave marker. Like the Manhattan's waterfront, the Hoboken waterfront was once lined with numerous piers that serviced local and international shipping of all descriptions. During World War One, Hoboken became the major point of embarkation for more than three million soldiers, known as doughboys, who passed through the city. 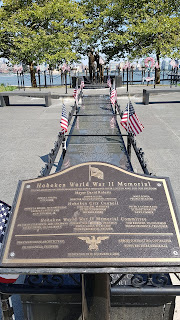 Above and Below: The World War II Memorial. 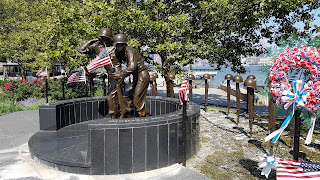 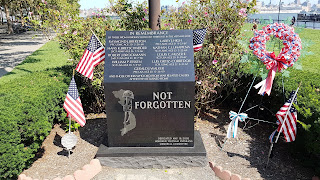 Not Forgotten, the 2002 Memorial to Hoboken's Vietnam War Veterans.
...


Hoboken also once supported a vibrant shipbuilding industry, a fact which made this former shipwright very nostalgic for his first major career decision. The image below is on the grounds of what little remains of that industry along this part of the Hudson River Walkway. 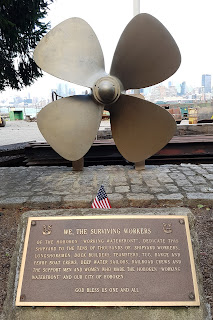 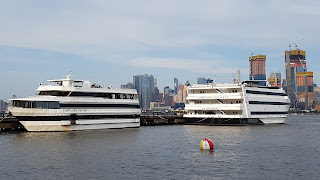 Today, more than 45 years after I left the shipbuilding game, I still stop to watch boats and ships of all types pass on their way to and from foreign parts and ports. 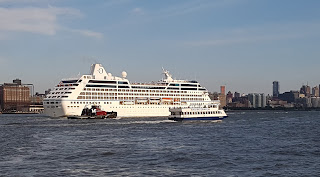 Any questions, comments or suggestions? How about complaints or compliments? Let me know via the comments box below.
Posted by Jim Lesses at 4:51 AM