NYC Day 57: In Which I Go In Search of Mad Dogs And Englishmen 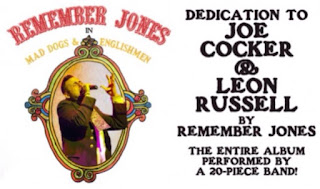 ...
Mad Dogs And Englishmen
My main event for Friday, August 11, was billed as "A celebration and re-creation of the entire groundbreaking 1970 live album and tour, MAD DOGS & ENGLISHMEN. Serving as a dedication to Joe Cocker and Leon Russell, the show will be recreated with the exact 20-piece personnel from the original tour including a full choir, two drum kits, horn section, piano and Hammond B3, two guitars, and more." And what a celebration it was.

"This event will include all songs from the entire tour beyond those on the original album release, with interpretations of songs by rock and soul greats including The Beatles, The Rolling Stones, Bob Dylan, Ray Charles, Otis Redding, Leonard Cohen, Traffic, Leon Russell, and more."

Taking on lead vocals was "a notorious and bombastic vocalist and persona," going by the stage name, Remember Jones (don't ask me why. I haven't go a clue!) However, Remember Jones had energy to spare, and he led the assembled musicians and guest singers from the front, like a general leading his troops into withering fire.

It was a 'take no prisoners' kind of night, and I am grateful to the young waitress who noticed that I had wads of tissue paper stuck in my ears in an attempt to protect what little is left of my hearing. When she brought me a set of ear plugs I was quick to substitute tissue paper for foam, and unlike one lady I overheard as I was leaving the Highline Ballroom, my eardrums were not 'bleeding' from the volume that 21 musicians and singers make when they are pounding out The Letter at full throttle.

Click here... to watch Remember Jones and his ensemble performing Delta Lady, and With A Little Help From My Friends at the Count Basie Theatre, March 14, 2015.

Any questions, comments or suggestions? How about complaints or compliments? Let me know via the comments box below.
Posted by Jim Lesses at 11:19 PM