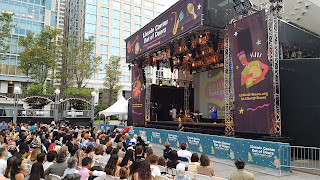 All work and no play makes Jim a dull boy - or words to that effect. Not that I have worked for the past six or seven years, but I'm sure you get my drift. There are only so many masterpieces that one can fake interest in before your eyes glaze over and Masterpiece Fatigue sets in, and it's time for coffee and cake.

Thus it was that on days 50 and 51 in the Big Apple I indulged in my love of movies and grabbed the opportunity to catch up on some recent (and not so recent), films which were being screened as part of the Museum of Modern Arts year round film schedule. For reasons I can't fully explain, I did not attend any of these film screenings during June or July, but now that I have immersed myself in endless rounds of art, I have gone through MoMA's film schedule for August, and I intend to see a bunch of movies that I have either missed or which I want to see again.

I should point out the screenings come with standard MoMA membership, so there is no additional $12.00 cost to me (yes, I am a member). 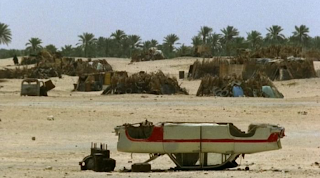 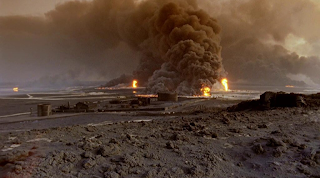 To date I have seen two Werner Herzog films, Fata Morgana, (1971) and Lektionen in Finsternis (Lessons of Darkness), from 1992. In Fata Morgana, Herzog makes desert mirages palpably real through sound and image in this hallucinatory walkabout across the shimmering Sahara. The filmmaker would later observe, “[E]ven though obviously shot on Earth, the film does not necessarily show the beauty and harmony and horror of our world, rather some kind of a utopia—or dystopia—of beauty and harmony and horror. When you watch Fata Morgana you see the embarrassed landscapes of our world, an idea that appears repeatedly throughout my work, from The Enigma of Kaspar Hauser to Pilgrimage [to Lessons of Darkness].”

In Lessons of Darkness, Herzog examines the devastating after effects of the first Gulf War (August 2, 1990 to February 28, 1991), which came about due to the stupidity and megalomania of Saddam Hussein after Iraq - under his leadership - launched an invasion against Kuwait. In this short 54 minute film, Herzog focuses his lens on the campaign to extinguish some 700 oil well fires which had been lit by retreating Iraqi forces. If ever there was a vision of hell on earth, this film captures it in all its raging, scorched earth and sky blackened horror. 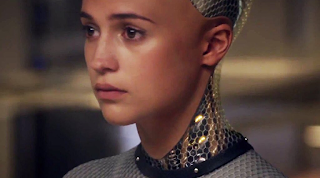 Alicia Vikander in a still from Ex Machina

Two more recent films which escaped my attendance when they were first released are Jonathan Glazer's Under The Skin, starring a very un-alien-like Scarlett Johansson, and Ex Machina, written and directed by Alex Garland in 2014.

In Ex Machina, a very alien-looking Alicia Vikander is joined by a small but stellar cast which includes Oscar Isaac, and Domhnall Gleeson. In the film, Garland reimagines the Frankenstein myth where Oscar Isaac seems to have built the perfect humanoid, which he calls Ava - brilliantly portrayed by Vikander. He engages a young coder (Gleeson) to test Ava over the course of a week, and these sessions with her form the basis of the film and the drama that follows. I agree fully with the program notes that state: Ex Machina quickens the mind and body. It is one of those rare films that is as intellectually and morally upsetting as it is erotic. 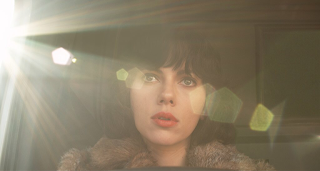 Scarlett Johansson in a still from Under The Skin

Under the Skin, Jonathan Glazer's 2013 film, has the always wonderful Scarlett Johansson driving a large white van around the wilds of the Scottish highlands and the even wilder nocturnal streets of an unnamed Scottish city, collecting male specimens for some unknown alien race. The men she selects are invariably single, and loners or outsiders living on the edges of society. Her work is overseen by first one, then apparently four aliens who clean up after her collecting expeditions are completed.

We learn nothing about her origins, or why she and her helpers are collecting males in particular, and not females. Neither do we know what happens to the males, once they have been processed. Things proceed smoothly enough with the collecting expeditions until a moment of compassion on Johansson's part starts to unravel her mission, and the film moves on to its final confrontation.

I remember reading about the film when it was released early in 2014, and was fascinated to learn that many of the males that appear briefly in the film were complete novices. In fact, a number of them were picked up at random by Johansson as she drove around in the van, and their interactions were filmed secretly with hidden cameras. One clue as to which of these men are the random pickups, is their almost unintelligible Scottish accents. The few professional actors in the film, whether Scottish or otherwise are easily understood. 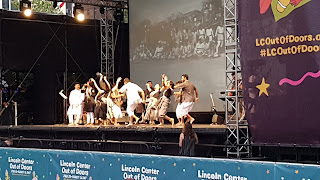 Bollywood Boulevard performers dancing up a storm
...
As for the 'Music' component of this post and my activities over these two days, I continue to enjoy the wonderful variety of acts that are part of this year's Lincoln Center Out Of Doors program. These include the colorful and dynamic dancing during the Bollywood Boulevard evening on Thursday, August  3. This evening was subtitled A Journey Through Hindi Cinema, and while I am not an aficionado of the Bollywood movie scene, there is no doubt that these films are incredibly popular. The evening traced the evolution of Bollywood, from black-and-white classics to colorful blockbusters, and brought "the spirit and romance of India’s grand palaces, mountain vistas, and sweeping mustard fields to Damrosch Park."

I also attended, though it has to be said, briefly, the New York premiere of Miguel Atwood-Ferguson: Suite for Ma Dukes.


New Yorkers can finally experience this towering orchestral tribute to the music of composer, producer, and rapper J Dilla, who produced groundbreaking records for De La Soul, Erykah Badu, and Common, among others, and whose impact is still felt today over ten years since his death at age 33. Heard through the prism of classically trained composer and violinist Miguel Atwood-Ferguson’s expansive orchestral arrangements and producer Carlos Niño’s musical direction, Dilla’s works explode in scope, untethered from any era or genre and bursting with rhythmic and melodic invention.

Sometimes I worry that I am not as sophisticated musically and artistically as I like to think I am, and it is for this reason that I did not stay the distance and take in the full program of music that was presented during this event. I have written elsewhere that hip hop and rap are musical forms that I least enjoy, and I'm sure this is partly because I have never made a serious attempt to understand them. Until I Googled for 'J Dilla', I had never heard of the name, nor was I familiar with any of his production or recording credits, so I had no emotional connection with the music emanating from the stage, despite the excellence of the orchestrations and the skills of the many musicians performing the new arrangements.

Which brings to my latest night out on Day 51, and another Lincoln Center Out Of Doors concert, this time featuring the songs of the silver-haired British music legend, Nick Lowe. 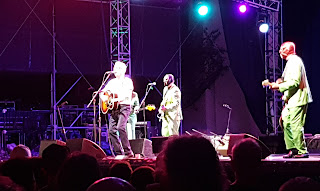 Billed as Nick Lowe's Quality Rock 'n' Roll Revue, Lowe was backed by a four piece group out of Nashville going by the name Los Straightjackets, who, despite their well dressed attire, wore leather headgear of the type one finds in stores that specialize in fetish wear (the program notes describe them as "luchador-masked") Why four excellent and clearly talented musicians should feel the need to mask their faces with this type of gear is beyond me, but I guess it sets them well apart from the competition, and it certainly gets them the attention they are looking for. But back to Nick Lowe.

Lowe rose to fame in the late ’70s with his Top 40 single Cruel to Be Kind, and since then he has become a venerated songwriter, and producer of classic albums by Elvis Costello, Graham Parker, and The Pretenders. Nick Lowe first came to my notice with his debut album, Jesus Of Cool, released in 1978. For me, this album has now reached Classic Album status, and I find it just as enjoyable to listen to today, as I did when I first heard it all those years ago. I was delighted therefore when he included the song, So It Goes from that album, along with a host of later hits - and near misses - from his 40 year career in popular music.

And that dear reader, brings to a close my seventh week in New York City