NYC Day 48: In Which I Stand in Awe at The Feet of The Great Villalpando 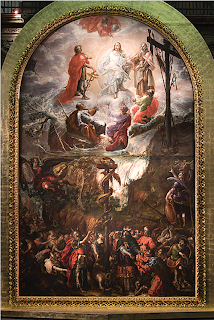 Moses and the Brazen Serpent and the Transfiguration of Jesus
Click on images to view full sized.
...

The plan today, was to return again to the Met Museum for a few hours, and then make my way across Central Park to the Lincoln Center in plenty of time to catch Angelique Kidjo performing the Talking Heads classic album, Remain in Light, along with a set from the British ensemble Ibibio Sound Machine, both at Damrosch Park. I made it to the museum okay, and as usual headed straight for the cafeteria on the lower ground floor. From there I was just steps away from a wonderful new exhibition, Cristóbal de Villalpando: Mexican Painter of the Baroque.


Cristóbal de Villalpando (ca. 1649–1714) emerged in the 1680s not only as the leading painter in Mexico, but also as one of the most innovative and accomplished artists in the entire Spanish world. This exhibition features his earliest masterpiece, a monumental painting showing two scenes—Moses and the brazen serpent, and the Transfiguration of Jesus—in an unprecedented juxtaposition of these Old and New Testament subjects. Painted in 1683 for a chapel in Puebla Cathedral and newly conserved, the 28-foot-tall painting has never before been exhibited outside its place of origin in Puebla, Mexico. Ten additional works are shown that demonstrate Villalpando's engagement with concepts of invention and professional identity, his ability to convey complex subject matter, and his capacity to envision the divine. Highlights include his recently discovered Adoration of the Magi, on loan from Fordham University, and The Holy Name of Mary, from the Museum of the Basilica of Guadalupe in Mexico City. [Source; Met Museum website]

Let me just say that Moses and the Brazen Serpent and the Transfiguration of Jesus, is a masterpiece in every sense of that word. The images included in this post do the work a complete injustice. Look at the images, and then imagine them projected as high as a two or three storey building. You will then get a sense of just how huge this work is. 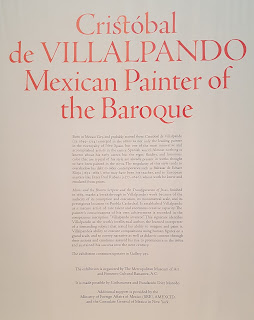 Information panel at the VillalpandoThe exhibition. 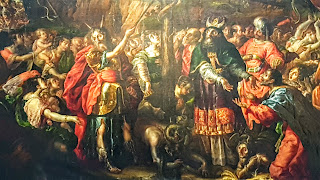 Above: Detail from Moses and the Brazen Serpent...
...

In this bold and erudite composition, Cristóbal de Villalpando pairs the Old Testament story of the brazen serpent with Gospel accounts of the Transfiguration of Jesus, staging both scenes in a continuous landscape. The lower half depict the punishment of the Israelites, tormented by a plague of deadly serpents for speaking against God and Moses.. [..] The upper half of the painting depicts the Transfiguration of Jesus, witnessed by three startled apostles atop the holy Mount Tabor. [Source: Information provided with the painting].

Whether you are believer or non-believer, you must surely stand in awe, as I did, at the sheer scale and boldness of Villalpando's vision, and his ability as an artist working in the late 1600's to conceive of and then complete this work. When Villalpando finished the painting in 1683, the two sections together stood approximately 28 feet 4 in. high, with a width of 18 feet (865 × 550.1 cm)

In the image below, the thin band of pale light located in the middle and to the right of the painting shows a passageway in the Met Museum where visitors can just be seen examining some other works of art. This will give you some idea of just how high Villalpando's magnificent work looms over the visitors below. I am quite sure I will return to the museum to see this masterpiece again and again before I return to Australia in September. 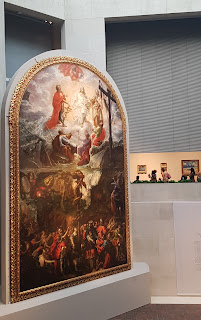 IF YOU GO
Cristóbal de Villalpando: Mexican Painter of the Baroque
Now through October 15, 2017
At the Metropolitan Museum
Fifth Avenue, New York City. 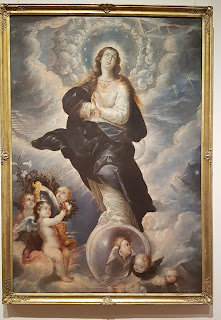 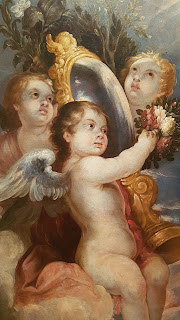 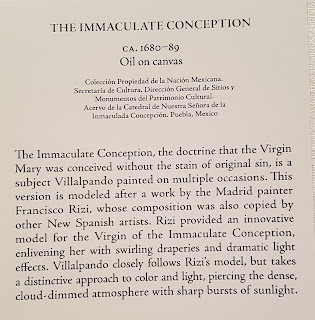 Information panel for The Immaculate Conception
...

As for Angelique Kidjo, the overcast sky, which had been sending out ominous warnings all day in the form of rolling thunder and shards of lighting, was releasing a light fall of rain as I, and hundreds of other visitors left the Met Museum at five o'clock. And the inclement weather only threatened to worsen as the night progressed. To be honest, as much as I thought I wanted to see Angelique Kidjo, my heart wasn't in it, and the light rain provided the excuse I needed to catch an M4 bus back to Washington Heights. Needless to say, before I was half way 'home', the clouds began to break apart, and patches of blue sky began to poke through here and there, as if to mock me. But it was all to no avail. I alighted at my bus stop and treated myself to a couple Corona's and dinner at Refried Beans, my local Mexican restaurant, and called it a day. 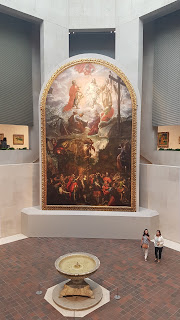