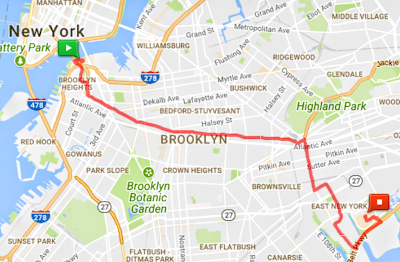 My route across Brooklyn as mapped by my Map My Walk app.
...
ON THE BUSES ACROSS EAST NEW YORK
Today I had every intention of going for a long walk along Brooklyn Bridge Park, which follows the East River for some considerable distance. However, the road to Hell is paved with good intentions, and it didn't take long before the heat and high humidity dissuaded me from that idea. So what was I to do? After I surfaced from the A-train at the High Street/Brooklyn Bridge station in Brooklyn, I made a spur of the moment decision to board the nearest bus, and see where it would take me.

Yes folks, I was about to play the End Of The Line Game one more time.

The nearest bus turned out to be for the B25 route. I picked it up in the shadow of the Brooklyn Bridge on Front Street, and before too long I found myself wending my way along the miles long Fulton Street, towards Broadway Junction where I the bus was due to end its run. At Broadway Junction I boarded a B83 bus which was heading to what I assumed was a mall of some type called, Gateway Center, somewhere on the edge of Jamaica Bay (No, not that Jamaica!).

I have written before about my reasons for catching buses rather than taking the subway, which is invariably faster and more direct. However, the subway lines don't take you to every corner of greater New York City, and besides, you don't get to see much of the city while speeding through deep, dark tubes underground.

Let me just say that I am not all that familiar with the far reaches of the outer boroughs. While many parts of this vast city are well maintained, and even quite beautiful, I know that there are others parts that are in desperate need of maintenance and beautification. These areas include parts of the Bronx, Queens, and Brooklyn.

In Brooklyn, despite the gentrification that is slowly transforming those neighborhoods bordering the East River, the farther away you get from the river and Manhattan the worse the borough begins to look. And so it was, that as I sat on my B25 and B83 buses, I found myself, and not for the first time, as the only non-person of color, or non-Spanish speaker, gazing out the windows as we passed through the neighborhoods of Fort Greene to Crown Heights to Brownsville, and finally to East New York. 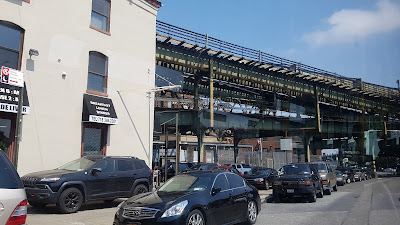 Above and Below: A couple of images from my bus seat. 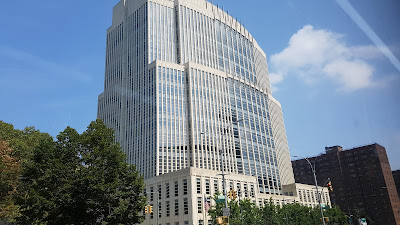 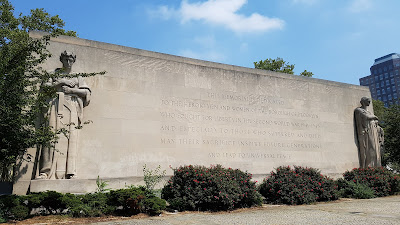 Above the Brooklyn War Memorial
...
It soon became apparent that these outer neighborhoods are among the poorest and least serviced areas of the city. I was amazed at the number of shopfront churches that line the main roads through these neighborhoods. On one short Fulton Street block, there were seven such storefront churches vying for the hearts and souls of the local residents.

Starting at 2077 Fulton Street and working your way up you will find The Melchizedk House of Prayer; the Spanish American Christian Church; the New Hope Pentecostal Church; the Blessed Assurance Church of God; Emanuel Christian Church; Gethsemane Baptist Church, and finally Saved To Serve Ministries Inc.

Other nearby churches sported names like Full Gospel Church of God #2 Inc, St. Paul's Pentecostal Church of God, and the St. Matthew Fire Baptist. The Full Gospel Tabernacle-Faith was right next to The Spiritual Israel Church and its Army, both of which were close to the Pleasant Grove Baptist Church, and on and on and on. In fact all of the above churches were within a few blocks of each other as were numerous others.

If the neighborhood streets are not taken up by these 'churches', they are are filled with Crown Fried Chicken, and Kennedy Fried Chicken (and other fast food) outlets. Then there are the many Unisex Beauty Parlors, local deli's, small supermarkets and dozens of other small businesses eking out a living from some of the poorest citizens of this great city.. 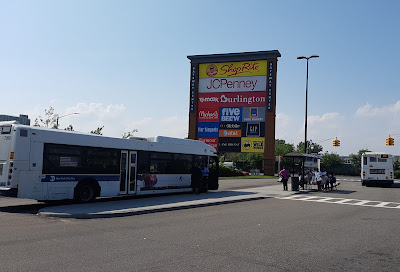 Above and Below: The Gateway Center. 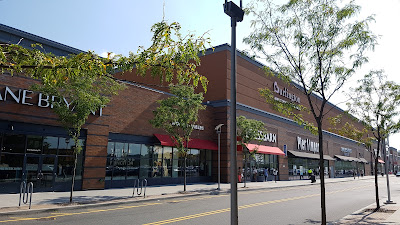 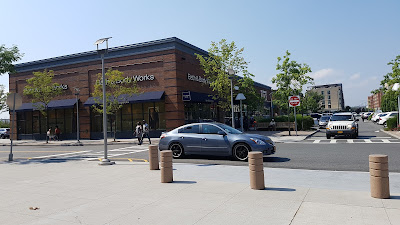 ...
After nearly two hours of slow, torturous bus travel through these outer Brooklyn neighborhoods, I finally reached the Gateway Center, only to find that it was not your typical enclosed shopping mall, but a series of well-known department stores and cafes laid out in a relatively new shopping complex (surrounded by acres of parking lots), just a mile or so from JFK airport.

I found a seat inside a Panera Bread outlet and sat down to a hearty Thai Salad and a long, cold lemonade. Since I had no need for shopping, once I had finished eating I found a B83 bus, and returned once again to Broadway Junction from where I caught an A-train back to Washington Heights.