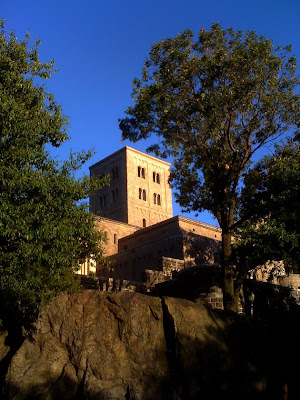 Image: The Cloisters commanding the best views, high over the Hudson River

~ Went out in the early evening for a walk up towards the Cloisters, which is only ten minutes from the apartment I’m staying at. The Cloisters is the branch of the Metropolitan Museum of Art dedicated to the art and architecture of the European Middle Ages, and is located in Fort Tryon Park near the northern tip of .

By the time I reached the park the building itself was closed, but the park was alive with activity. I quickly realised I was walking into a typical summer night. While it may seem like a movie cliché, to me it was everything I expected to see on a hot summer evening. Given that the vast majority of residents on live in apartments, very few have access to anything resembling a garden or private yard. This means that in the evenings they spill out onto the streets and into neighbourhood parks (of which there are more than you might expect).

had its fair share of picnicking families, strolling couples and joggers, dog walkers and book readers, and bird watchers and sunbathers. Several paths afforded great views of the , which were spoilt only by the fact that you had to squint into the lowering sun to see anything.

A large children’s playground is located at the corner of and Broadway, and this was packed with families: adults, teenagers, children and grandparents. Streams of water were spraying high into the air in one central play area and young kids squealed with delight as they ran through the mist and showers of cooling water. Ice cream vendors with small three wheeled carts walked around the area plying their wares, and Latin music boomed from passing cars.

I sat for a while enjoying a $1 cup of ice cream, before deciding to walk to the end of . Not the bottom end of the island, you understand, but the top – or northern – end, which was less than a mile away.

That iconic thoroughfare, Broadway, runs from the southern end of up through its centre and continues on way beyond the end of the island. It is my wish to walk the entire length of the section of Broadway, but now that I am here experiencing for myself that much talked about summer humidity, I will have to adjust my goals and complete the task in stages rather than one long walk. I have nothing to prove (apart from my stupidity) by walking 22 kilometres in 95 degree heat and 80 percent humidity – and the last time I looked, I wasn’t that stupid! 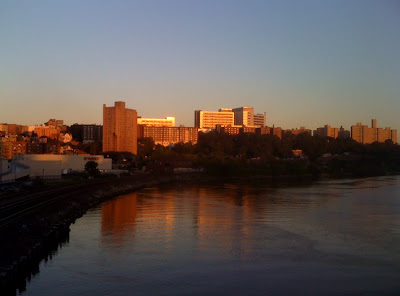 Image: Evening view of the Bronx over the Harlem River
...

Anyway, since it was close, I set off to walk to the end of , and I was happy I did. Along the way I passed Dyckman Farmhouse, a Dutch Colonial style farmhouse built by William Dyckman in 1784 (or thereabouts). The Farmhouse is an extraordinary reminder of earlier and an important part of its Inwood neighbourhood. It was of course, also closed, but I will certainly return for a good look before I leave .

At the corner of and Broadway stands the . In the garden on the is a steel cross similar to the better known 20 foot high (6.1 m) cross salvaged from the rubble of the . Though much small in size, this blackened cross and the memorial garden it watches over is a poignant reminder of that terrible day. Wherever you go in you will find memorials, large and small, to the thousands of victims of that terrible event, which – as you might expect – continues to have a huge impact on the lives of all New Yorkers.

Continuing along Broadway, I soon came to that narrow body of water which separates from the . The is spanned by the , which may be unique in that if it needs to be raised for small ships or other craft to pass beneath, it rises parallel to the water, as one long platform. Having walked across the bridge to the – and mainland – I began my return walk back to the apartment. 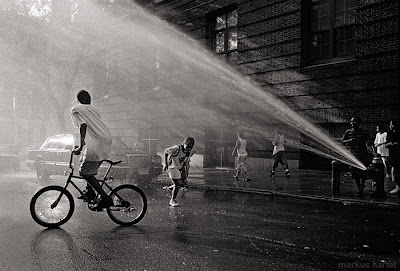 Somewhere up a side street in Inwood, I encountered another image I associate with New York: someone had turned on a fire hydrant just enough to send a curtain of water cascading across the road so that local children could play in the shower of ‘rain’ it created.

It would have made a lovely picture. Just the same, it was a great way to end my evening promenade through the top end of .