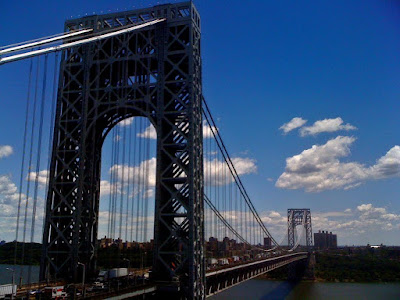 This entry could just as easily have been called: Walking the , or Walking Off My Jetlag, but let’s not quibble. What’s in a name, after all?

After heading to bed around 10.30 last night for a much need rest, I woke around 5.00am and could not get back to sleep, so I got up an hour later and wrote my earlier post (see below). I had a late breakfast (brunch) with my host, and then went off to perform a ritual I always undertake when staying in a new area: I explore my surroundings and try and orientate myself to the landscape by picking out obvious landmarks that will help me remember where my accommodations are, as well as where each point of the compass is facing.

Today I wandered aimlessly for an hour or so, but since I wasn’t achieving anything useful, I decided to walk part way across the which connects the upper end of with . The Manhattan end of the George Washington Bridge (or the ‘George’ as it is also informally called), is located in Washington Heights – where I am staying – while the borough of Fort Lee is on the New Jersey side.

It was a glorious morning for walking, and I have to say the view from the bridge was stunning as I set off down the pedestrian walkway running along the left side of the bridge’s upper level. A steady stream of joggers and lycra clad bike riders flashed past me as I ambled out to its mid-point.

The Wikipedia entry for the George Washington, states that as of 2007 the bridge has the greatest capacity of any bridge in the world, carrying approximately 106 million vehicles a year, and quite frankly that doesn’t surprise me. As I walked just a metre or two from roaring mass of steel, a constant flow of every type of truck, bus and automobile was pouring over the bridge into , with maybe half that number heading in the other direction towards . I wasn’t there to see it, but I’m sure the majority of the traffic flow would have been reversed during the evening rush hour. 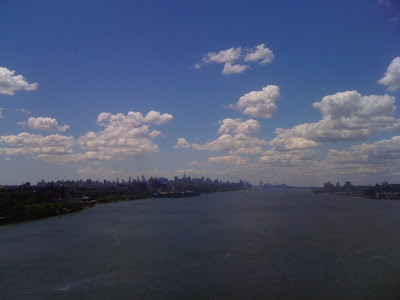 Image: The view down the Hudson River, similar to the view that would have been facing Captain Sullenberger as he flew low over the George Washington Bridge.

Standing at the half way point, one almost gets the same exact view that presented itself to United Airlines pilot, Chesley "Sully" Sullenberger III, on . Sullenberger, you may remember, rose to fame when he successfully ditched US Airways Flight 1549 in the off . Captain Sullenberger had to fly low over the before he safely brought the plane down – in the process saving the lives of all 155 people on the aircraft.

Having reached the halfway mark, walking the full length of the bridge seemed to be the logical thing to do, especially since I could see an observation area high up on the side – which turned out to be .

The Bridge is near the sites of Fort Washington (on the New York side) and Fort Lee (in New Jersey), which were fortified positions used by General Washington and his American forces in his unsuccessful attempt to deter the British occupation of New York City in 1776 during the American Revolutionary War. evacuated by crossing between the two forts [Source: Wikipedia].

The was even more stunning when viewed from the observation area than it was from the side. Although I hasten to add, that I haven’t thoroughly explored the side at all at this point – but then I’ve been here less than 24 hours!

However, ignoring the constant roar of the traffic, the view down river was spectacular to say the least. I watched as tug boats slowly pushed huge barges upriver. What was their ultimate destination and what, if anything, were the barges carrying? I saw sailing boats, pleasure craft, and numerous Circle Line passenger boats carrying sightseers on a full circumnavigation of the . I was even fortunate to see a lone deer grazing quietly near the fort car park, and numerous squirrels, and small rodent-like creatures I didn’t recognize. 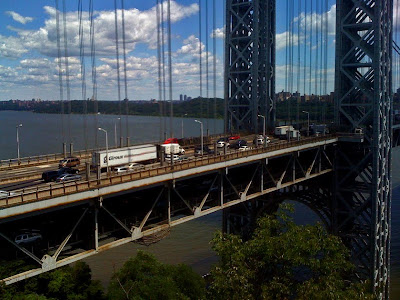 Image: 14 lanes of traffic ferry transport and people to and from Manhattan/New Jersey.

When it opened in 1931, the bridge had the longest main span in the world; at 1,067 m (3,500 ft), while the total length of the bridge is 1,451 m (4,760 ft). As originally built, the bridge offered six lanes of traffic, but in 1946, two additional lanes were provided on what is now the upper level. A second, lower deck, opened to the public in 1962. This lower level increased the capacity of the bridge by 75 percent, making the the world's only 14-lane suspension bridge [Wikipedia],

As you might imagine, with eight lanes on the upper level and six on the lower deck, the accumulated noise spilling off the bridge throughout the day is loud and constant.

"The over the is the most beautiful bridge in the world. Made of cables and steel beams, it gleams in the sky like a reversed arch. It is blessed. It is the only seat of grace in the disordered city..." [Wikipedia]

Well, Chazza, that’s a pretty sweeping statement to make about any bridge, but I have to agree that it is indeed wonderful to stand at the foot of either one of its two massive towers, and marvel at the extraordinary feat of engineering the structure represents. Maybe that is why the George Washington Bridge was designated a National Historic Civil Engineering Landmark by the American Society of Civil Engineers in October, 1981, the fiftieth anniversary of the bridge's dedication ceremony.

Maybe it’s a ‘man/guy thing’, but a walk across the is well worth the effort. Especially when you are rewarded with sweeping views of ’s Westside, the vast expanse of the as it flows towards the , and the sight of towering skyscrapers reduced to the size of matchsticks far off in the distance, at the lower end of the island.

Unfortunately, I set out on my walk this morning completely unprepared for what might eventuate. This meant I had no water or hat with me, and worse yet, I had left my digital SLR behind, so I had to rely on the camera in my phone to try and capture the experience. Hence, the images illustrating this entry are not exactly award winning, but they will have to do until I explore the area further, and take some better photos.

So there you have it. My first full day in , and I can honestly say not only did I walk from to – but I also walked from to . In the same day! Pretty impressive, I reckon.

Thanks to Wikipedia for the background information...

Images: Jim Lesses
Posted by Jim Lesses at 10:55 AM