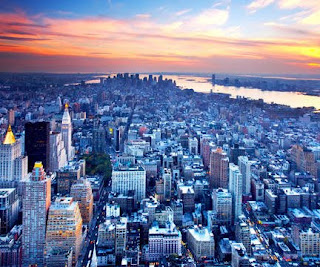 ~ After an long day travelling from to , I made it to the apartment in at a good hour, and with plenty of time to settle in and get to know my host better, as well as the two cats I am here to care for.

Now as I begin writing this at , still tired, while my body clock adjusts to the change in time zones and the upset my daily routines have been thrown into, I can hear the quiet hum of the city as it slowly begins to wake up and stretch. I’m trying to tune into its rhythms: the early morning calls of unfamiliar birds; the faraway thump of rotors from a helicopter hovering high over Manhattan; the dull thump of car doors as they are closed; the soft panting of the first jogger as he passes my bedroom window; the swish of cars as they carry the first rush of city workers to their labors; the wave of aircraft flying into and out of the three major airports that service the city; voices in the street; strange cadences and accents; someone coughing; these are just some of the aural stimuli my senses are processing on my first New York morning.

But this is the place. This is where I most want to be on the planet today.

And as I write these words I am reminded of a simple piece of homespun philosophy I read in the American Airlines in-flight magazine yesterday. To paraphrase the homily, since I can’t remember the exact quote: It doesn’t matter what your age is – you will never be this young again. So make the most of it.

Amen, to that, brothers and sisters.

And good morning to you, .