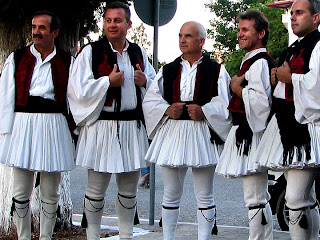 ~ On Saturday, June 14, 2008, a Festival of Greek Dance was held in the village of Rahes, on the Aegean island of Ikaria, and this film, one of several I have put together, shows the final dance of the night. The tune is known as the Ikariotiko (or The Ikarian), and is the island’s traditional tune and dance.

The festival took place on the village basketball court, under lights that attracted hundreds of moths and other airborne insects which fell constantly onto the heads of the audience below. This probably explains why only half the lights were turned on during the performances. Unfortunately, this also made it extremely difficult to get good, well lit footage of the dances.

Audience chatter and the constant movement of children and adults across the 'stage' seems to be part and parcel of any event of this type, given the location, and the hot summer night. In the end, it all goes towards creating yet another unforgettable and unique Greek island experience.

The wonderful thing about this festival is the way the community totally involves itself in the event. Rather than assume the constant chatter and movement as being disrespectful to the musicians and dancers, it is instead a sign of the audiences involvement and connection with the music and dancing.

Quite frankly, I'm surprised the adults didn't get up and dance during the three hour show themselves. Greeks find it very difficult to sit and watch something like this, when their natural inclination is to get up and join in. 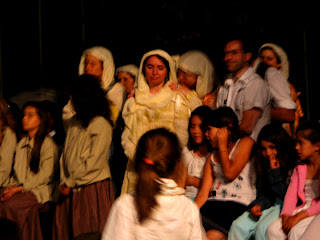 Throughout the night, local children stood at the edges of the performance space intently watching the feet of the dancers, while they tried to follow the steps of each dance. As everyone (dance troupes and visitors alike), got ready to join the final dance.

This was the signal for children of all ages to join the long lines―generally at the end of each line, as tradition dictates―to learn, and carry on the island traditions. It would of course be unthinkable to tell the children to keep out of the way while the adults did 'their thing'. The children are literally learning at the feet of the adult dancers.

The music is performed here on a Tsampouna, an instrument made out of goat skin, which has obvious links to the Scottish bagpipe and the gaida. I should also add, the Ikariotiko is played constantly at festivals, weddings, parties, in deed at celebrations and occasions of all types. And not just once per night, but many times. Each musician has his or her own variation of the tune, and some musicians are still remembered and spoken about today, long after their passing, because of the way they played the dance. I love how the musician actually spends a full minute and 20 seconds (1:20), playing an extended introduction to the main tune. This gives audience and performers alike plenty of time to make their way onto the basketball court and join lines in readiness for the dance to begin.

To my great regret, I did not get the name of the female playing the Tsampouna, nor did I take any footage of her during the dance, which finished off the evening's entertainment. However, as chance would have it, she happened to walk past my camera just before I turned it off at the end of the dance. I have captured a frame from the video and added it as a still image just before the final credits appear as a way to acknowledge her performance.

A comment added to one of my other videos suggests the musician is Eva Kratsa. Another source thought she lived on the island of Mykonos.

I hope you enjoy the music and the occasion.

More Videos
You can see many more of my travel videos on my YouTubepage…
Posted by Jim Lesses at 8:59 AM