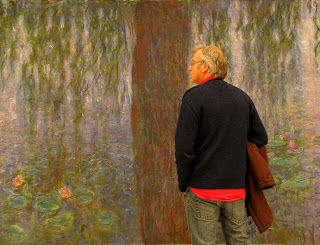 I visited the Musée de l’Orangerie, in Paris during my stay in the ‘City of Lights’, in December 2010. The Museum is an art gallery of impressionist and post-impressionist paintings, located on the banks of the Seine in the old orangery of the Tuileries Palace, on the Place de la Concorde near the Concorde metro station.

I first encountered two of Monet’s magnificent Water Lily masterpieces when visiting the Museum of Modern Art in New York City. Although I had seen photographs of some of these paintings often enough, nothing prepared me for the sheer joy I experienced standing before these masterpieces of shadow, light and colour.

Claude Monet was born on 14 November 1840 on the fifth floor of 45, rue Laffitte, in the 9th arrondissement of Paris. Monet was a founder of French impressionist painting, and the most consistent and prolific practitioner of the movement's philosophy of expressing one's perceptions before nature. The term Impressionism, is derived from the title of his painting: Impression, Sunrise (Impression, soleil levant). 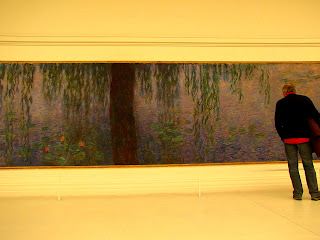 Beginning in the 1880s and 1890s through the end of his life in 1926, Monet worked on several "series" paintings, in which his subject matter was depicted in varying light and weather conditions. Using his own gardens (with their water lilies, pond, and bridge as inspiration), Monet’s Water Lilies date from this period.

In 1922, Claude Monet signed a contract donating the Nymphéas series of decorative panels to the French government. With input from Monet, the Nymphéas were arranged on the ground floor of the Orangerie in 1927. The eight paintings are displayed in two oval rooms, and are viewed under direct diffused light as was originally intended by Monet.

In what I can only assume is a very unconventional method of mounting the paintings, the eight massive canvases have been glued directly to the walls. 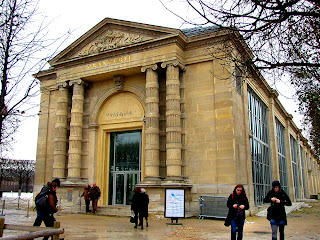 Monet died of lung cancer on 5 December 1926 at the age of 86, and is buried in the Giverny church cemetery. His home, garden and water lily pond were bequeathed by his son Michel, to the French Academy of Fine Arts in 1966. Through the Claude Monet Foundation, the house and gardens have been open for visits since 1980, and are a ‘must see’ for all devotees of Monet’s work.

According to the museum's website, the Orangerie was originally built in 1852 to shelter the orange trees of the garden of the Tuileries. Today, while it is most famous for being the permanent home for eight Water Lilies murals by Claude Monet, the Musée de l’Orangerie also contains works by Paul Cézanne, Henri Matisse, Amedeo Modigliani, Pablo Picasso, Pierre-Auguste Renoir, and Henri Rousseau among others.

Here is a brief look at some of those magnificent works of art: