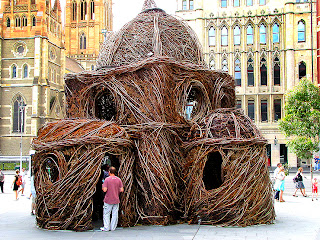 ~ During my three week house sitting stint in Melbourne over January, I frequently found myself hanging out at the city’s Federation Square. The square has become the active heart of Melbourne with some type of event, or events taking place there throughout the summer, and at other times of the year.

While I was there, a major installation, Ballroom, attracted much attention from visitors and locals alike. The installation was created by American artist, Patrick Dougherty, who bends, weaves, snags and flexes a humble pile of sticks to create works of art that are inseparable from nature and landscape. Over the last twenty five years, Dougherty has build more than two hundred works throughout the Untied States, Canada, Europe and Asia, with every piece mesmerising in its ability to fly through trees, overtake buildings, and virtually defy gravity.

In addition to freestanding structures, Patrick’s art functions just as easily as adornments. What shape the works take, depends very much on the site and methodology used. 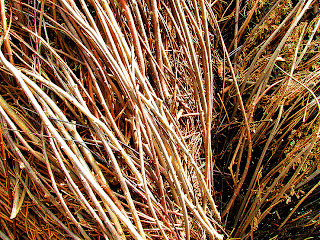 The work took three weeks, or 2000 hours, to build with the help of 70 volunteers. In part inspired by the architecture of Flinders Street Station, Patrick named this piece, Ballroom.

Speaking about the installation, Patrick had this to say: “I think that a good sculpture is one that evokes in the viewer a wealth of personal associations. My viewers see stick castles, lairs, nests, architectural follies; and they remember moments in the woods building forts and hide outs.

I hear stories about the Garden of Eden, favourite trees, and secrets about first dates. Some viewers touch the surfaces and talk about the momentum of wind of other forces of the natural world. Most important, people love to explore strange shapes and hidden spaces, particularly if they encounter them in unlikely spots. I like to see children running towards the openings and people standing on the street and pointing. I like to spark people’s imaginations and connect them with nature in a surprising way.”

Here is a brief video I shot of the installation during my stay:

More information:
Federation Square...
Posted by Jim Lesses at 9:50 AM