~ The modern, relentless 24 hour news cycle, has a voracious appetite. Most news stories, unless on the scale of the September 11, 2001 terrorist attacks in New York City, and Washington, DC, quickly disappear from the front pages of newspapers or as the lead story of nightly news bulletins.

At least 285 people were killed along the path of the storm in seven countries. In the United States, where media organizations and some U.S. government agencies nicknamed the hurricane "Superstorm Sandy," the storm affected 24 states, including the entire eastern seaboard. The most severe damage occurred in New Jersey and New York, when the storm surge hit New York City on October 29, flooding streets, tunnels and subway lines, and cutting power in and around the city. Damage in the US was estimated at over US$71 billion.

Six months after Hurricane Sandy made landfall in Cuba, and worked its way up the east coast of the United States to New York City and beyond, devastating coastal communities in its path, little if anything is heard about the ongoing recovery efforts still underway in these coastal communities. In New York City for example, vast stretches of beach front along the Atlantic reaches of Staten Island and Coney Island in particular still look much like they did soon after the storm struck.

Of the numerous subway stations and tunnels that were flooded by the almost 14 foot storm surge, the new South Ferry station seems to have suffered the most, when 15 million gallons of salt water poured into it, causing around US$600 million in damage. In response, the old 108-year-old South Ferry station has been reopened while the new station is repaired―a process that may take as long as two or three years!

To my knowledge, the one remaining subway line to be affected by Hurricane Sandy is the A-train. This currently runs as far as the Howard Beach station, with free shuttle buses operating non-stop between this station, and Far Rockaway-Mott Avenue. I assume, rail service is also affected at the other end of the Rockaways, at Rockaway Park Beach. More information about this service can be found at the MTA.INFO site…

Elsewhere along the coast, work is continuing apace to get New York’s beaches ready for the 2013 summer season. Despite being one of the worst affected areas, Coney Island is already open for business―or most of it anyway. The main outlet for Nathan’s Famous, a Coney Island business famous for its hotdogs, and for the annual hotdog eating contest they run remains closed, although its other branch location on Boardwalk West is open.

The nearby New York Aquarium at Coney Island was flooded, and will have a limited opening this spring, but there is no timetable for the re-opening of Nathan’s. Meanwhile, Rockaway beach and Jacob Riis Park should be open by May 25 (Memorial Weekend), but it looks like Fort Tilden will be closed for the summer.

The viewing ‘decks’ of the shopping mall on Pier 17 provide some of the nicest views of the Brooklyn Bridge―especially if you time your visit to coincide with the magic hour or two around sunset. Then the view and the wonderful photographic opportunities are unbeatable. Sadly, though, not only did the South Street Seaport Museum suffer extensive damage, but the Pier 17 area itself was badly affected by the storm. 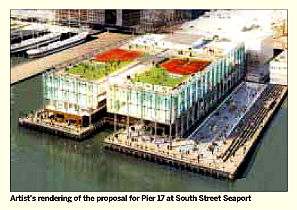 Negotiations are currently underway with the Howard Hughes Corporation (which owns the Pier 17 area), to build a modern shopping mall, incorporating a rooftop garden and concert area, and other facilities. I can’t say I am excited by the new design for the building which features copious amounts of glass, and seems out of place at a ‘seaport’ location, but maintaining the seaport there is better than having yet another skyscraper dominating the skyline at the foot of Manhattan.

In the meantime, I understand the current shopping facilities at Pier 17 will continue to operate as best they can through summer 2013, until construction of the new building commences later this year.

I am sure the above is just a small part of what remains to be done to repair and replace damage caused by Hurricane Sandy in the New York City area. But I hope it serves as a reminder that although the news cycle has moved on, thousands of people along the whole length of Sandy’s path are still dealing with the aftermath  of the storm every day, and will continue to do so for many years.
Posted by Jim Lesses at 1:03 PM