NYC Day 54: In Which I Go in Search of Pre-Revolutionary America 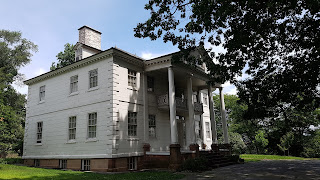 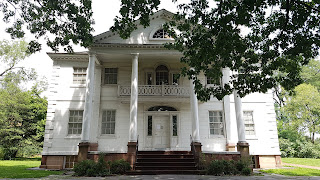 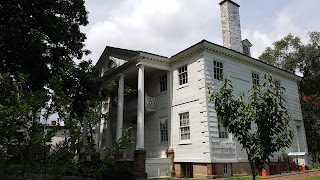 Three views of the Morris-Jumel Mansion
Click images to view full sized
...
It may surprise you, dear reader, that in amongst the soaring skyscrapers that dot the New York City skyline, there are to be found numerous buildings and homes that reach back to before the American Revolution. I know that may seem preposterous; that a city as dynamic and as ever changing as New York City, somehow retains vestiges of it's revolutionary past.

One of those buildings is the Morris-Jumel Mansion, located on an acre or two of land in upper Manhattan, overlooking the East River (at 65 Jumel Terrace). I mention the acreage specifically because the former estate on which the mansion now stands once stretched across Manhattan from the Hudson River to the East River, and from approximately 168th Street down to 158th.

The Mansion today is part of the Jumel Terrace Historic District, a small historic district in the Washington Heights neighborhood of Manhattan.


It consists of 50 residential rowhouses built between 1890 and 1902, and one apartment building constructed in 1909, as the heirs of Eliza Jumel sold off the land of the former Roger Morris estate. The buildings are primarily wood or brick rowhouses in the Queen Anne, Romanesque and Neo-Renaissance styles. {Wikipedia...]


The Morris-Jumel Mansion, Manhattan's only remaining Colonial residence, is unique in its combination of architectural and historical significance. Built as a summer "villa" in 1765 by the British Colonel Roger Morris and his American wife Mary Philipse, it originally commanded extensive views in all directions: of New York harbor and Staten Island to the south; of the Hudson and Harlem rivers to the west and east; and of Westchester county to the north.

Colonel Morris was the son of the famous architect Roger Morris, a fact which may explain the extremely innovative features of the Mansion such as the gigantic portico, unprecedented in American architecture, and the rear wing which was the first octagon built in the Colonies. 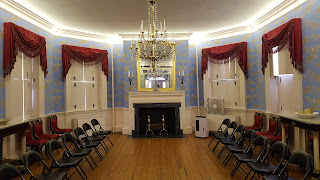 Above: Interior of the octagonal Drawing Room, and below items within the room, 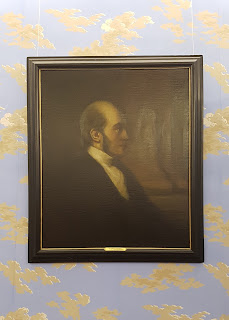 A painting of Aaron Burr, by George Hans Eric Maunsbach 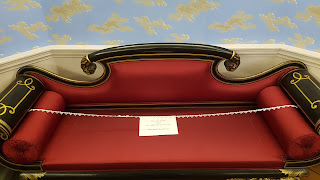 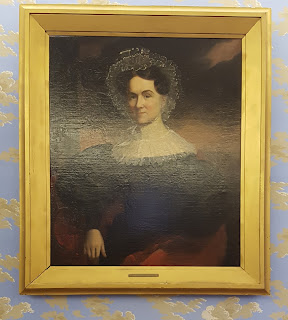 Painting of Eliza Jumel by an unknown artist.
...

The house's situation and large size made it ideal as military headquarters during the Revolution, and it was occupied successively by Washington, General Sir Henry Clinton, and the Hessian General Baron Von Knyphausen. As the Morrises were loyal to Britain during the Revolution, their property was seized and sold after its conclusion. In 1790 Washington returned for a cabinet dinner at which he entertained Jefferson, Adams, Madison, Hamilton, and Colonel Knox, among others.

The later history of the house centers on the Jumels, Stephen Jumel was a wealthy French emigre who married, in 1804, his beautiful and brilliant mistress, Eliza Bowen. They bought the Mansion in 1810. In 1815 they sailed to France, and offered Napoleon safe passage to New York after Waterloo. although he eventually declined the offer, they did acquire from his family many important Napoleonic relics - some of which can be seen in the blue bedroom on the second floor. Stephen died in 1832 and Eliza married the ex-Vice-President, Aaron Burr in the front parlor a year later. On her death in 1865 she was considers one of the wealthiest women in America. 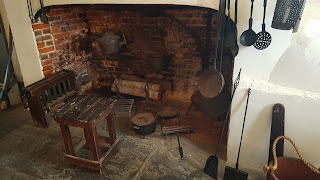 Above and Below: The kitchen situated in the basement. 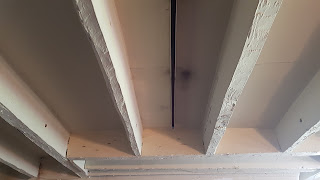 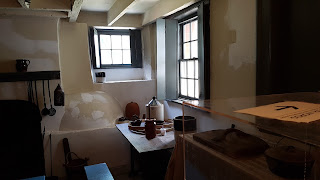 ...
It should be said that today the Mansion is in dire need of an extensive (and no doubt expensive) upgrade of its exterior facade. The staff member I was taking to described a complicated arrangement with a government heritage department which divides responsibility for the buildings maintenance thus: the non-profit group managing the site is only able to renovate and fix the interior of the building, while the government agency is responsible for the exterior. This has led to a situation in which the interior is progressively being upgraded, while the exterior of the building appears run down, and in desperate need of maintenance, including and a fresh paint job.

I don't know how many of the fittings and items of furniture currently on display in the Morris-Jumel Mansion are original to the building, but as a 'work in progress', it was sobering to walk in the footsteps of George Washington, and some of the other leaders of the American Revolution for an hour or so, and to try and imagine the scenes playing out inside the Mansion more than 200 years ago.. 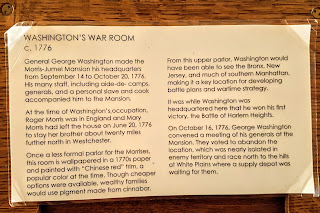 Above and Below: A series of photos representing Washington's War Room. 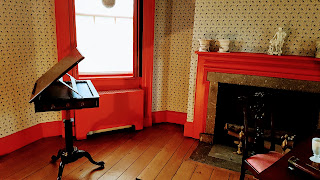 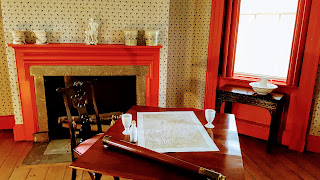 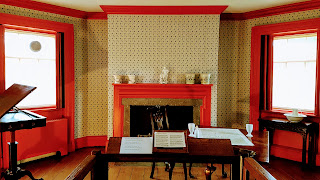 ...
A special bonus for visitors who make the trip uptown to see the Morris-Jumel Mansion is the chance to walk along one of the most unique streets in the whole of New York City; and that is the incredible time warp that is Sylvan Terrace. 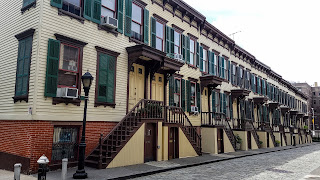 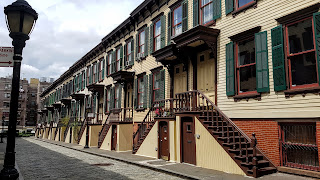 Sylvan Terrace, located where West 161st Street would normally be, was originally the carriage drive of the Morris estate. In 1882-83 twenty wooden houses, designed by Gilbert R. Robinson Jr., were constructed on the drive. Initially rented out to laborers and working class civil servants, the houses were restored in 1979-81. They are now some of the few remaining framed house in in Manhattan. {Wikipedia...] 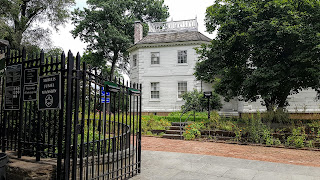 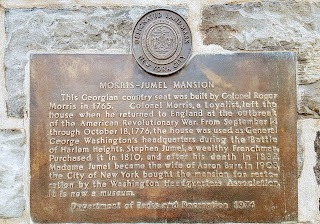 Any questions, comments or suggestions? How about complaints or compliments? Let me know via the comments box below.
Posted by Jim Lesses at 1:53 AM