NYC Day 53: In Which I Give Thanks For a Rainy Day Monday 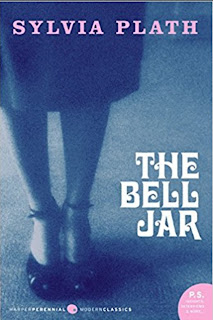 The cover of my edition of The Bell Jar
...
Unusually for New York City, it rained all day today. Unusual, because generally the storm clouds and the rain that accompanies them generally move on after a few hours, leaving the streets of the city washed relatively clean for a day or two, before they are once again covered with a layer - or layers - of the daily grime that never seems to get completely washed away, no matter how severe the downpour.

To be honest, I was grateful for the excuse the rain gave me to stay in. In fact, I did not step foot outside the apartment all day. I did consider going out for dinner, but in the end I couldn't be bothered making the effort to do even that. So I cooked my own (spaghetti, garnished with spiced Moroccan olives, and spaghetti sauce straight out of a jar).

I spent the day updating this blog, and reading. I finished my 29th* book for the year, Sylvia Plath's only full length novel, The Bell Jar. My delight in the book was tempered by the knowledge that Plath took her own life at the age of 31, and that with this final act, the literary world will never know just how many other great novels she may have written if she had chosen to live.


Sylvia Plath (October 27, 1932 – February 11, 1963) was an American poet, novelist, and short story writer. Born in Boston, she studied at Smith College and Newnham College at the University of Cambridge before receiving acclaim as a poet and writer. She was married to fellow poet Ted Hughes from 1956 until they separated in September 1962. They lived together in the United States and then in England and had two children, Frieda and Nicholas. Plath was clinically depressed for most of her adult life, and was treated multiple times with electroconvulsive therapy (ECT). She committed suicide in 1963. Plath is credited with advancing the genre of confessional poetry and is best known for two of her published collections, The Colossus and Other Poems and Ariel, and The Bell Jar, a semi-autobiographical novel published shortly before her death. In 1982, she won a posthumous Pulitzer Prize for The Collected Poems. [Source: Wikipedia...]

What a brilliant tour de force of a debut novel The Bell Jar is. The book is essentially a memoir of the first 20 years of her life. So personal is her writing, that it was not meant to be published in America until Plath's mother had herself passed away, which given her mothers relatively young age, would have potentially been many years after Sylvia had died. In the end, the book had become so popular in Britain (where Plath was living at the time), that when illegally imported copies of the book began turning up in the US, following Plath's death, the publishers had no choice but to release the book there, or face the prospect that some other publisher would do so. 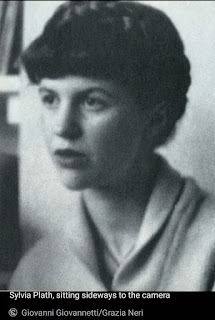 One of the few available photos of Sylva Plath
...
The Bell Jar is one of those books that seems to be name-checked by many other writers and artists, and it was way past time I got around to reading it. The book is beautifully written, with her prose reflecting her other great skill as a poet.

Plath spent a month in New York City when she was 19 as part of a placement with a women's magazine. She writes extensively about this period in The Bell Jar, and the following quotes, which capture aspects of New York perfectly, come from this time.

I have written in previous posts about the drenching downpours of rain that hit New York City from time to time, but none of my descriptions come close to this passage from Sylvia Plath:


"When we came out of the sunnily lit interior of the Ladies' Day offices, the streets were gray and fuming with rain. It wasn't the nice kind of rain that rinses you clean, but the sort of rain I imagine they must have in Brazil. It flew straight down from the sky in drops the size of coffee saucers and hit the hot sidewalks with a hiss that sent clouds of steam writhing up from the gleaming, dark concrete."

Or this spot on observation about another of my persistent complaints regarding the city's summer heat:


"I didn't realize Lenny's place had been air-conditioned until I wavered out onto the pavement. The tropical, stale heat the sidewalks had been sucking up all day hit me in the face like a last insult."

Noting that she had been the same weight for ten or more years, Plath writes that she had no problem eating as much as she liked compared to her associates:


"I made a point of eating so fast I never kept the other people waiting who generally ordered only chef's salad and grapefruit juice because they were trying to reduce. Almost everybody I met in New York was trying to reduce."

After a wild night out with fellow interns, Plath and one of the other females throw up in a taxi on the way back to the hotel, causing Plath to observe:


"There is nothing like puking with somebody to make you into old friends."

Like Jean Rhys's book, Wide Sargasso Sea, this book too is a real 'keeper'. Not only will I make a point of reading it again, but I will also seek out copies of her collected poems when I next visit Strand Books or the Housing Works Book Store.

*29th book. With regard to counting the number of books I am reading: I began the year with a self-imposed 52-Book-Year Challenge, the goal of which is to read an average of one book per week during 2017. Hence, Sylvia Plath's The Bell Jar, is book 29.

Any questions, comments or suggestions? How about complaints or compliments? Let me know via the comments box below.
Posted by Jim Lesses at 12:57 AM