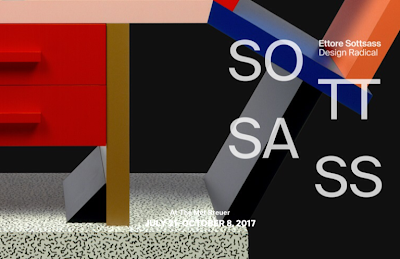 Click images to view full-sized
...
New York: Day 61
Tuesday 15, August | Expenses $00.00
After my late night out at the Bitter End (see previous post), and not getting to bed until well after 2:00AM, I spent today indoors, taking it easy. That's it. 'Nuff said. 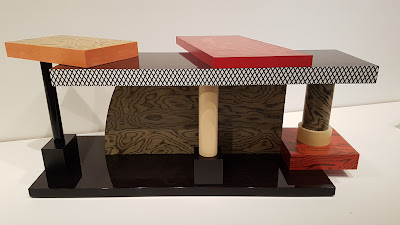 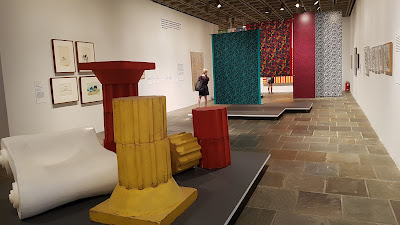 Above: Images from the Ettore Sottsass exhibition.
...
New York: Day 62
Wednesday 16, August | Expenses $49.00 ($61.75)
I seem to be sleeping in more and more these days. Today was no exception, but I went out during the afternoon to the Met Breuer for the first time in several weeks. There is a new exhibition currently underway there, Ettore Sottsass: Design Radical.


A seminal figure in 20th-century design, the Italian architect and designer Ettore Sottsass (1917–2007) created a vast body of work, the result of an exceptionally productive career that spanned more than six decades. This exhibition reevaluates Sottsass's career in a presentation of key works in a range of media—including architectural drawings, interiors, furniture, machines, ceramics, glass, jewelry, textiles and pattern, painting, and photography. The exhibition presents Sottsass's work in dialogue with ancient and contemporaneous objects that inspired him, as well as his influence on designers working today. These juxtapositions offer new insight into his designs, situating him within a broader design discourse that reveals him as a true design radical. 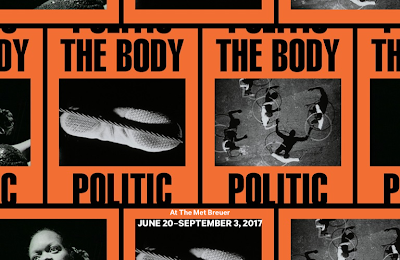 ...
THE BODY POLITIC: VIDEO FROM THE MET COLLECTION


The Body Politic: Video from The Met Collection presents four works created between 1995 and 2016: David Hammons's Phat Free (1995), Arthur Jafa's Love Is the Message, the Message Is Death (2016), Steve McQueen's Five Easy Pieces (1995), and Mika Rottenberg's NoNoseKnows (2015). Alternately provocative, poignant, and absurdist, all of them explore the relationships among power, performance, and moving images. Here, the role of the camera is paramount. Besides a mediating agent and a framing device, the camera also serves as a witness, representing acts of injustice as well as moments of rebellion.

The Body Politic: Video from The Met Collection
Now through September 3, 2017

From the Breuer, I took first an M3 and then a M55 bus down to the Housing Works Bookstore Cafe (at 126 Crosby Stree, Manhattant), where I succumbed to purchasing two more books: Teju Cole's Open City, and a management book called Everything I Know About Business I Learned From The Grateful Dead, by Barry Barnes.

From there I headed off to the Angelika Film Center (at 18 West Houston Street, Manhattan) to see Sofia Coppola's latest film, The Beguiled.

New York: Day 63
Thursday 17, August | Expenses $31.72 ($40.10)
I slept through until 9:30 this morning, and got up thinking I could still do with a few hours sleep. This week has been a slow one for me, and I realize finally that I have 'hit the wall', as long distance runners might say. I am even finding it hard to work up the enthusiasm to write these blog posts. This 'hitting the wall' thing happened to me at around the same point last year, when for a brief time I thought, That's it. I'm over New York City. I could happily leave and never come back.

Of course, by the time I did leave New York, I was already looking forward to my next visit -- little thinking that it would be this year. Now here I am, not exactly over the city, but once again feeling worn out and ready to take a week off from all activities and events. Needless to say, I won't, but I will take it easy this week, and then try and ramp up my energy levels for the final three weeks of my stay.

Today, I returned once again to MoMA, and focused my attention of Pablo Picasso, and an artist I know nothing about Giorgio De Chirico (not that I know anything to speak of about Picasso). 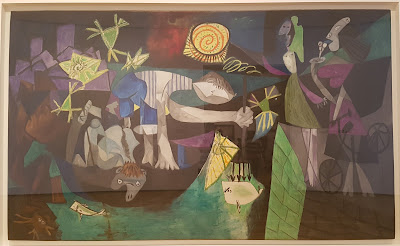 Pablo Picasso: Night Fishing at Antibes, 1939
...
Picasso, as most people are aware, made his name as a cubist painter, in which his subjects are pulled apart and put together again in fractured, angular pieces. Most art galleries crave these types of paintings and sculptures by Picasso, but few seem to care about his early artistic career when his paintings were executed in a far more traditional style. 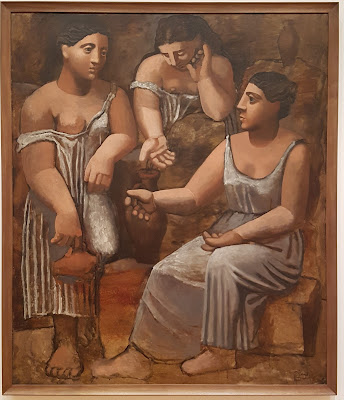 Pablo Picasso's Three Women at the Spring, 1921.
...
The Musee de l'Orangerie in Paris has quite a number of these early works on show, and when I saw them I was surprised by how conventional they were. And how good. But why should I have been surprised? The only reason I can offer is that few people get the chance to see these early works, because the major museums and galleries prefer the cubist Picasso to the conventional one. MoMA is no different to other institutions, but at least the room showing a large number of his works does have a few early pieces that reveal this other side of the artist. 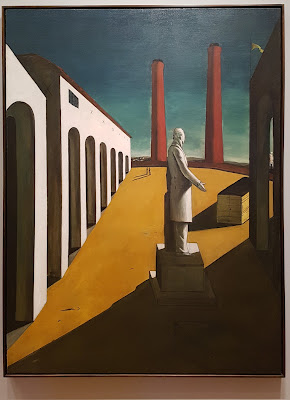 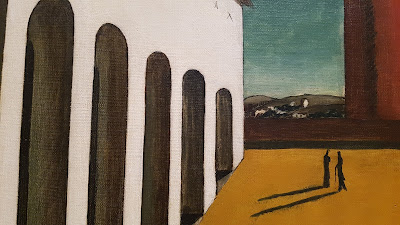 ...
Giorgio De Chirico (1888-1978) is described as an Italian, born in Greece, and seems to have been one of the early surrealists. Judging by the works on show at MoMA, he also seems to have had a ''thing' for trains and placing small, isolated figures within huge, towering landscapes. 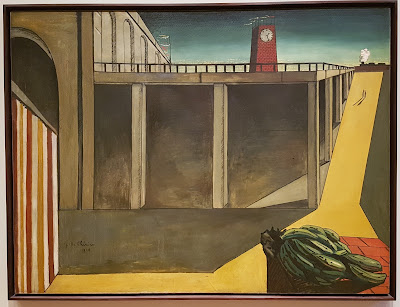 Above Giorgio de Chirico's Gare Montparnasse (The Melancholy of Departure), 1914.

I capped off my afternoon at MoMA by attending their screening of Steven Spielberg's 2002 adaptation of a Philip K. Dick short story, Minority Report. The film starred Tom Cruise, Colin Farrell, the great Max Von Sydow, and the wonderful Samantha Morton. 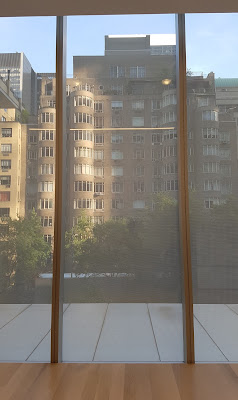 Late afternoon view of nearby buildings from MoMA
...
Any questions, comments or suggestions? How about complaints or compliments? Let me know via the comments box below.