NYC Day 55: In Which I Am Once Again Spoilt For Choice in The Big Apple 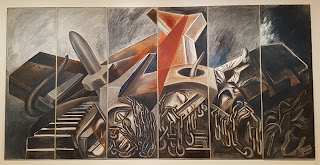 Dive Bomber and Tank (1940), by Jose Clemente Orozco
Click on images to view full size
...
I had eight events listed as potential activities for this day, and one of them was not a return to the Museum of Modern Art, but there I was, being drawn back to that venerable institution on 54th Street once again. This post features works from the Mexican Modernists room.

MEXICAN MODERNISM
After the Mexican Revolution (1910-1920), the new government of Mexico instituted a program to celebrate the nation's indigenous heritage and recent history. Artists were central to this initiative, designing and creating large-scale murals that often monumentalize their subjects, portraying both recognizable historical figures and common peasants and workers as symbols of strength in the face of adversity.

Through the support of the Museum of Modern Art's cofounder Abby Aldrich Rockefeller, Diego Rivera and Jose Clemente Orozco were invited to New York in 1931 and 1940, respectively, to make frescoes in work spaces provided by the Museum. Also in New York, in 1936, David Alfaro Siqueiros, interested in innovative materials and techniques, founded the Siqueiros Experimental Workshop, whose membership included Jackson Pollock. Driving these artists, as Siqueiros explained, was the imperative to create "a fighting educative art for all." 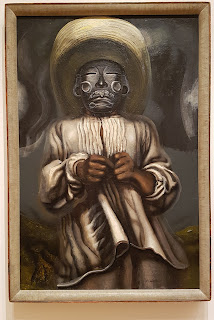 Above: full painting, and below, a detail from Ethnography (1939), by David Alfaro Siqueiros 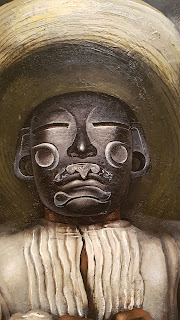 DAVID ALFARO SIQUEIROS (1883-1949)
Of Los tres grandes (The Big Three) Mexican muralists, Siqueiros was the youngest and the most politically radical. His artistic career was repeatedly interrupted by his fervent political activity and frequent imprisonment. Siqueiros believed that revolutionary art called for revolutionary techniques and materials. Collective Suicide features several innovative techniques the artist explored as part of the Siqueiros Experimental Workshop he founded in New York in 1936. He airbrushed paint across the top third of the panel and used stencils to depict the army of invading seventeenth-century Spanish conquistadors on horseback (lower right) and Chichimec Indians leaping to their deaths to avoid subjugation (left). The swirling vortexes are pools of fast-drying commercial lacquer typically used on cars. A member of the workshop later recalled that they applied this paint "in thin glazes or built it up into thick gobs. We poured it, dripped it, splattered it,  and hurled it at the picture surface." Siqueiros's radical experiments proved influential for Abstract Expressionist artist Jackson Pollock, in particular, who was a member of the workshop. 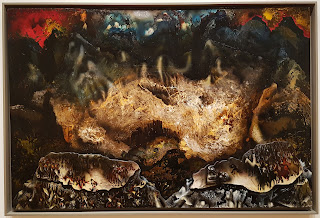 Above: Full painting, and below, details of David Alfaro Siqueiros's, Collective Suicide (1936). 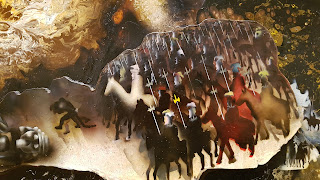 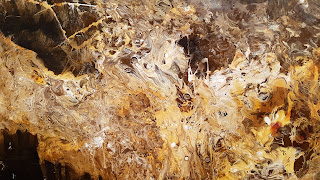 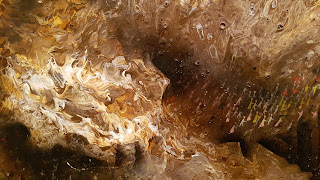 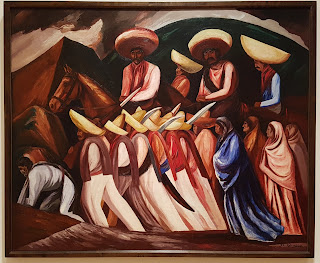 
DIEGO RIVERA (1886-1957)
Dedicated to the slain revolutionary hero Emiliano Zapata (1879-1919) and the campesinos, or peasant farm workers, who followed him, this fresco is a copy of a detail from a larger mural cycle Rivera made in Cuernavaca, Mexico, a few years earlier. It is one of eight "portable" frescoes Rivera produced expressly for his solo exhibition at MoMA in 1931. In a studio the Museum provided him above its galleries, he worked around the clock for a month to produce frescoes that, unlike traditional frescoes, were intended to be transportable. The works demonstrate Rivera's mastery of the medium and were a critical and popular success. During its five-week run, the exhibition broke Museum attendance records and led to important public commissions from the Ford and Rockefeller families. 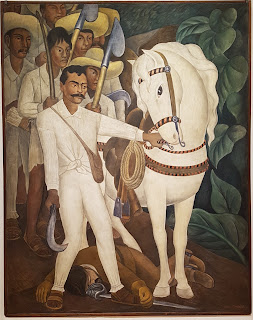 Above: The full painting, Agrarian Leader Zapata (1931), and below, a detail from the work. 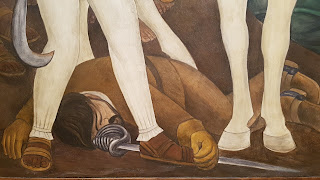 FRIDA KAHLO (1907-1954)
Kahlo collected eighteenth- and nineteenth-century Mexican retablos -- small paintings on metal made as Catholic devotional objects -- and adopted the medium as her own. In this fantastical family tree, Kahlo depicted herself as a fetus in utero and as a child inside her childhood home. While Kahlo celebrated Mexican culture by evoking its traditions in her art and wearing elaborate traditional attire, this painting is as much a tribute to her European and Jewish heritage. On the right is her German-born Jewish father and his parents, symbolized by the sea, and on the left her Mexican mother and her parents, symbolized by the land and a faintly rendered map of Mexico that appears above her grandparents' heads. Kahlo made this painting shortly after Hitler passed the Nuremberg Laws, forbidding interracial marriage. While the painting adopts the format of genealogical charts used by the Nazis to advocate racial purity, Kahlo uses it subversively to affirm her mixed origins. 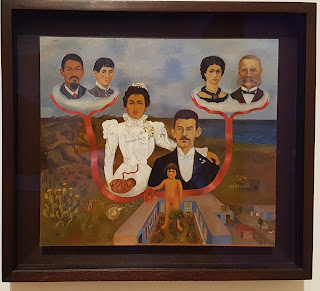 My Grandparents, My Parents, and I (Family Tree), 1936, by Frida Kahlo

Fulang-Chang and I depicts Kahlo with one of her pet monkeys, interpreted by many as surrogates for the children she and Diego Rivera were unable to conceive. The painting was included in the first major exhibition of her work, held at Julien Levy Gallery in New York in 1938. In the essay that accompanied the show, the Surrealist leader André Breton described Kahlo's work as "a ribbon around a bomb" and hailed her as a self-created Surrealist painter. Although she appreciated his enthusiasm for her work, Kahlo did not agree with his assessment: "They thought I was a Surrealist but I wasn't. I never painted dreams. I painted my own reality." Kahlo later gave this painting to her close friend Mary Sklar, attaching a mirror to it so that, if Sklar chose, the two friends could be together. 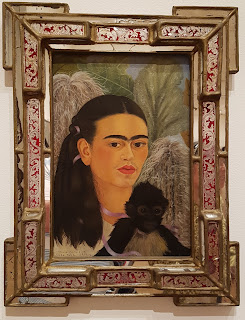 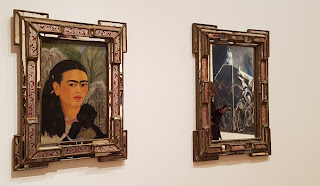 Note: All biographical and interpretive information in this post is sourced from the Mexican Modernism room at the Museum of Modern Art.