NYC Day 60: In Which I Party to The Bitter End (Almost) 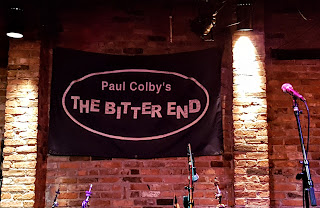 ...
The Bitter End is a survivor. The venue has been the nurturing ground for hundreds of the most successful rock, folk, blues, jazz, and comedy acts of the past 50-plus years - ever since it was established in 1961. Many other famous New York clubs have come and gone during this period, but the Bitter End just keeps on keeping on - and long may it continue to do so.

When I was planning this current visit to New York, I thought I would be hanging out at the venue two or three nights a week, but as it happens, there has been so much else going on that I have hardly visited the place. With this, my sixtieth day in the city, it was time to set things right and test my resilience for my first real late night out.

The venue hosts an average of five or six acts each night, and on any visit you might see young soloists working on their music and stagecraft, or professional bands with years of experience in full flight. Also, with it being a Monday, I knew I would be in for a late night because every Monday night sees the saxophonist Richie Cannata pulling together some of the best musicians you are likely to see and hear anywhere for the Monday Night Jam. But before we get to that amazing session, there were a number of other acts to check out.

...
Bess Greenberg
Kicking off performances for the night was Bess Greenberg, a singer-songwriter and visual artist from Binghamton, New York. Bess has a strong, mature, resonant voice, and a bunch of songs that while interesting and engaging enough, never quite lift out of the ordinary into the extraordinary. Bess plays guitar, which she pretty much strummed throughout all her songs. This eventually became monotonous, especially when on several songs, she strummed her way through 8-bars of what I assume will eventually turn into an instrumental break in which a good lead guitarist (should she find one), will add some variety to her plain rhythm guitar style. She said she was missing her bass player during this gig, but I suspect that even with the addition of bass guitar, the songs would not have taken off as I would have liked them to do. 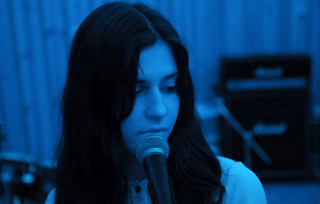 Julia Gargano
These issues were not a problem for the second act of the night, Julia Gargano and her three-piece band. Her songs were melodic, varied in pace, had shades of dark and light, and ranged from slow ballads to all-out rockers. Julia played acoustic guitar and piano during her set, and she knows how to fingerpick her way through a song, as well as belt out tunes on piano.

Julia was joined on stage for some of her songs by a fine female backup singer. However, this young woman has not yet worked out what she should be doing with herself while she waits for her vocal parts to come around during Julia's songs. Once she has learned to do this, and to relax and enjoy being on stage more, she will fit well into the full line-up. 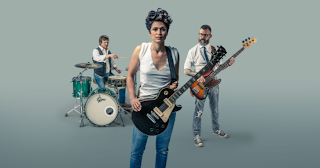 KALO
I first saw Bator-Or Kalo bring her exciting brand of rock and blues to the All Star Jam that takes place each Sunday fortnight at the Bitter End, on one of my visits to the venue in 2012. I became a fan there and then, and I have been happy to follow her development as a singer, songwriter, and as a rock and blues guitarist since that first encounter. In 2012, Bat-Or, an Israeli who moved to America in 2004, didn't have her own band, but since making the move from New York City to Oklahoma City, Bat-Or has been joined by Mike Alexander on drums, and Mack McKinney on bass guitar, and the trio now perform under the name KALO.

While Elfin-like and slight in stature, there is nothing slight about the music that Bat-Or writes and plays. In the five years since I first saw her perform, Bat-Or's guitar playing has become tighter and more exciting than ever to listen to. She has also become a more dynamic performer on stage. It is a place on which she clearly feels very comfortable.

Having seen the great slide guitar player Bonnie Raitt closing out the 2017 season of the Lincoln Center Out Of Doors program the previous evening, I can emphatically state that there are not enough women in rock music! Or playing Blues music for that matter. And Bat-Or and her bandmates are definitely a welcome addition to the thin ranks of past and present female rockers in those genres.

...
Rabbit's Foot
With the first three acts of the night being led by female performers, it was a surprise to see what I thought might turn out to be a New Directions type group take to the stage. However, I was delighted to see that the all male ensemble, Rabbit's Foot, were anything but another 'boy band'.

This five-piece out of Fairfield, Connecticut, play original Funk, Blues, and Soul music with a passion and expertise that belies their youth (although having said that, with regard to their apparent youth, when you are fast approaching your 69th year as I am, anyone under thirty-five will always be seen as young! But I digress).

The band is ably led by Spencer Bebon on vocals, and has a brilliant lead guitar player in Jad Qaddourah, with Will Corona on bass guitar, Seth Henriquez on keyboard and piano, and Les Gilman on drums. This group has the potential for big things. With the right support and management they may even achieve great things. The songs are upbeat, dynamic, and catchy. The interactions on stage between Spencer, Jad, Will and Seth showed they were all having a great time, and enjoying playing together.

Unfortunately, the same can not be said for the drummer Les Gilman. While I have no issue with his ability to play the drums and lay down a steady beat for the others to work by, the expression on Gilman's face ranged from bored to disinterested. Occasionally a half smile would pass over his mouth, but he never seemed to be a real part of the group. His interactions with the other four were minimal, and he never at any stage seemed to relax and get right into the spirit of the night.

I mentioned this to Spencer later during the evening, and he said that it was just Les Gilman's personality. That may well be so, but his demeanor simply did not fit in with either the music or with the dynamic performances of his bandmates. They may be happy with his drumming, but they should not be happy with his onstage persona. The vibe is not right. It may seem like a small thing, but it only takes one small thing to stop a band from reaching its full potential, and I sincerely believe that Les Gilman is the weak link in the Rabbit's Foot chain. 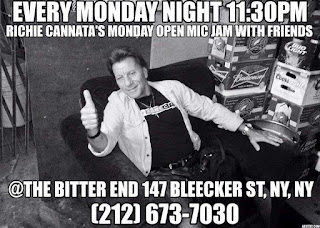 Richie Cannata's Monday Night Jam
And so to the final act of the night. And what a final act it was. Richie Cannata has been leading these Jam sessions for almost 30 years! And no, that is not a typo. According to the events Facebook page, he began in the late-80s at a venue called the China Club, followed by moves to numerous other city venues before finding a home at the Bitter End.

To say, as I did at the start of this post that he has put together "some of the best musicians you are likely to see and hear anywhere" is one of the great understatements. The jam night kicks off with an extend version of the song, Driven To Tears, co-written by Gordon Sumner and Sting. Each musician (and by my count there were nine of them, including the singer), is given time to shine on their chosen instrument, and by gawd do they ever glow! By the time everyone has had their moment in the spotlight, visitors have been treated to an amazing thirty-minutes or so of ear splitting improvisations that make the price of the modest $10 admission seem like the bargain of the year, which it probably is.

Again, from the Facebook page we learn that the core group consists of Benny Harrison (keys/vocals), Frosty Lawson (Flugelhorn/vocals), Jim Moran (guitar/vocals), George Panos (bass), Kevin Bregande (drums), and of course, the host with the most, Richie Cannata on saxophone. The only other musician whose name I did note during the night was the percussionist Julio Fernandez, who celebrated his 70th birthday that night.

Julio, we were told, played percussion on stage at Woodstock with Jimi Hendrix! At 70 he is tall and wiry, incredibly energetic, and he can pound out rhythms on a pair of conga's in an age defying display that left everyone in no doubt that they were in the presence of an  extraordinary musician. 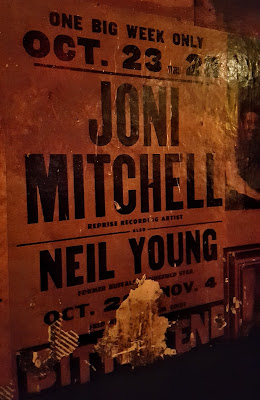 An aging poster on the wall of the venue.